3 Paris chocolate shops for Easter and beyond 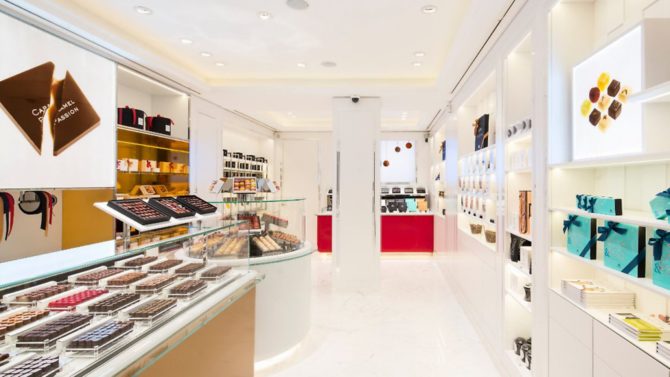 Perfect for Easter treats or a sugar rush at any time of the year, these chocolate shops are worth a visit on your next trip to the French capital

This stylish boutique on Rue Saint-Honoré is one of Belgian-born chocolatier Pierre Marcolini’s four locations in Paris (the others can be found on Rue de Seine, in Galeries Lafayette on the Champs-Élysées and in Galeries Lafayette Gourmet on Boulevard Haussmann). Marcolini’s passion for chocolate began at the age of just 14, and in 2020 he was named ‘Best Pastry Chef in the World’ at the World Pastry Stars awards.

Marcolini is committed to sustainability and an ethical approach to chocolate production, sourcing rare cocoa beans from five unique plantations around the world and paying the growers a fair price. “There are as many differences between cocoa beans as there are between the grapes of different vineyards,” says Marcolini, whose boxed selections include a ‘Grand Cru’ collection. He roasts the beans himself to ensure the entire process takes place in house, producing an ever-changing range of pralines, ganaches and bars with innovative flavours. Special collections are also created to mark seasonsal events. This year’s Easter collection is based around the theme of an enchanted magical garden, featuring mischievous rabbits and colourful baskets for children, while grown-ups can treat themselves to dark chocolate eggs and luxury amaretti biscuits.

The oldest chocolate shop in Paris, À la Mère de Famille first opened in Montmartre in 1761 when Pierre-Jean Bernard, a young grocer from Coulommiers in Seine-et-Marne, started his family business at 35 rue du Faubourg. The charming olde-world store with its emerald-green frontage has been a listed Monument Historique since 1984. Passed down through the generations it remained in the family until Étienne Dolfi, a confectioner from Alsace and former supplier to the company, took the reins in 2000 with his four children, who each have a box named after them. House specialities include grignotines and calissons, while nuts and dried fruits are used to flavour the milk and dark chocolates, which are still made to traditional recipes. You’ll also find delicious ice creams and macarons on offer too.

Pharmacist Sulpice Debauve perfected individual chocolates after blending a headache remedy with cocoa butter in 1779. He went on to become the official chocolatier to King Louis XIV and after forming a partnership with his nephew Jean-Baptiste Auguste Gallais, opened his first chocolate boutique in 1800. Balzac and Proust were regular customers to Debauve and Gallais and the shop has now been at its current location on Rue des Saint-Pères for over 210 years. Queen Marie-Antoinette’s favourite chocolate drops, les pistoles, which Debauve created for her after she complained about the unpleasant taste of the medicines she was required to take, are still sold today.