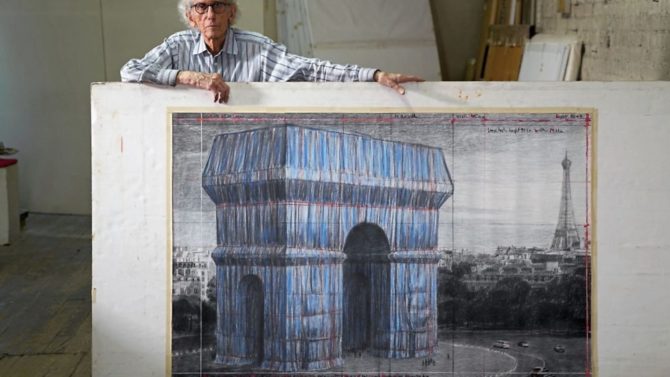 This September, for 16 days, a most recognised symbol of France will be covered in fabric, giving the impression that vital restoration work is about to commence. Yet the famous landmark will not be subjected to a re-point and polish, but will instead become an artwork entitled L’Arc de Triomphe, Wrapped.

What will L’Arc de Triomphe, Wrapped mean for the arch?

From 18 September, Napoleon’s triumphal arch will be draped in 25,000 square metres of silvery-blue recyclable polypropylene sheets, tied with 3,000 metres of red rope. The Arc’s sculptures, columns, arches, and reliefs will be cloaked, while the monument’s shape and bulk will be accentuated, perhaps reminding visitors that this was, upon its unveiling in 1836, the largest arch created since classical antiquity. It will require intricate logistics, including construction workers and specially trained rock climbers.

Whose idea was it?

This ironic creation of concealment will be the last artwork by Christo and Jeanne-Claude, who are most known for their Wrapped Reichstag, Berlin, of 1995, when they transformed an immense, bombastic building into something delicate and seemingly light. This encapsulated their belief in “revelation through concealment”, creating elusive, temporary sculpture by way of wrapping significant structures.

As only the sleek architectural form of the imposing monument will remain, Christo and Jeanne-Claude seem to indicate that this is the Arc’s very essence. What this essence might be and how it contrasts with what is already known of the Arc de Triomphe, will be tested this autumn as thousands of visitors ponder the spectacle of a new monument being conceived through the concealment of a most familiar French landmark.

Tell me more about Christo and Jeanne-Claude…

The idea of wrapping the Arc de Triomphe actually dates to 1961 when 23-year-old Christo Vladimirov Javacheff contemplated the monument from his Paris apartment. He was an unknown artist, a Bulgarian refugee, having escaped the Communist regime of his native state. Christo had already cultivated a means for wrapping small objects (chairs, bottles, eventually a motorcycle), and now, gazing at Napoleon’s triumphal arch he could only think of wrapping it, too.

His partnership with Jeanne-Claude is especially known for Wrapped Reichstag, which was seen by an estimated half a million visitors, and even during the Covid-era, large numbers are also expected to see the wrapped Arc this autumn. The project will cost around 12 to 14 million euros, and like all their work, Arc de Triomphe, Wrapped, will be entirely financed through the sale of the scheme’s architectural blueprints and models, without private or public funding or sponsorship. They even evolved a venture-capital entrepreneurial way of financing their staggeringly ambitious projects, creating their own company to do this: The CJC Corporation. The artists themselves will not see their latest and final installation though, as the project will be posthumous (Jeanne-Claude passed away in 2009, and Christo in 2020).

What about their other work in France?

The ephemeral wrapping of the Arc de Triomphe will not be Christo and Jeanne-Claude’s first Parisian venture. In 1985, they transformed Paris’s oldest bridge, the Pont Neuf, to being, in effect, its newest, revived after being draped in a sandstone coloured silky fabric.

Pont Neuf was metamorphosed with a new sculptural dimension that maintained its principal shape and still allowed pedestrians to walk across (on the fabric) and without hindering river traffic below. Christo viewed the project as a new way of looking at the bridge. Whereas Turner, Pissarro and Renoir had represented the Pont Neuf, Christo wanted the bridge itself to be considered a new work of art.

Interpretations are likely to range from the predictable to the profound, from translating the effect of the luminous wrapping to being symbolic of the City of Light; to the covered Arc’s history and relevance being in some way censored and blanked out, a mixture of sorrow and triumph that needs to be screened before it can be truly seen.

Once covered, even the most recognised forms become something else. L’Arc de Triomphe, Wrapped will reveal the spirit of the monument, as its purpose has been subject to change since its conception.

While the wrapping will call attention to that which has been covered, wrapping and packaging also indicates honour and signifies status, while it may also identify or attract, or even disguise. Wrapping also changes our relationship to the concealed structure and opens our eyes to what is right in front of us. It prompts us to take a fresh look at things.

Many French people, certainly Parisians, who probably stopped paying attention to the Arc because it became so familiar, will see it anew, as a contemporary work that references the Arc de Triomphe.

Besides, who really saw the Arc before it was draped? While it continues to be a focal point for some, it has been unseen and, in effect, invisible to others. But from 16 September, indifference will be supplanted by the most captivating sight in Paris. We should certainly anticipate responses that are akin to the project acting like a social mirror, reflecting how France feels about its past and itself.

But not all who gaze at L’Arc de Triomphe, Wrapped will analyse and interpret; some will be overwhelmed by the sheer audacity and majesty of it all. The wrapping will prompt admiration for Christo and Jeanne-Claude’s career, and France will argue with itself about what all of this could mean, ironically unifying the nation in discussion. And then, when the wrapping is removed, what will they see?

L’Arc de Triomphe, Wrapped will be on view for 16 days from 18 September to 3 October. For more about the artists, visit christojeanneclaude.net

Quiz: Can you guess the French landmark from the clues?