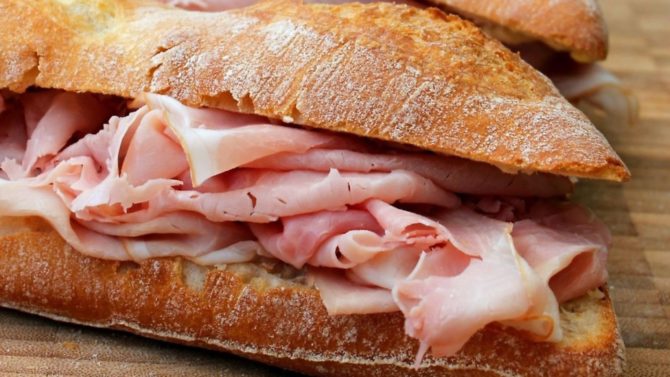 It used to be France’s most beloved sandwich but is the jambon-beurre being upstaged by the hamburger?

Raymond Blanc on the magic of cooking

The first meal I ever had in Paris was a jambon-beurre. Sitting on a bench at Champ-de-Mars while basking in the glory of the Eiffel Tower, it was that humble sandwich that impressed me most. Never had I eaten such a perfect yet simple creation: a freshly baked baguette de tradition, crispy on the outside and chewy on the inside, slathered with unsalted butter and generously layered with paper-thin slices of rosy pink ham. Little did I know I was sinking my teeth into a piece of French gastronomic heritage – one that years later would be upstaged by the hamburger.

The jambon-beurre used to be France’s most beloved sandwich. Its history goes back to the 19th century when it was a nutritious and portable meal for the working class and merely consisted of two thick slices of bread covered with a layer of lard or bacon. After the 1920s, however, the sandwich was given a makeover and became a sophisticated treat. No more stale bread with rancid lard, but elegant baguettes, churned butter from Normandy and freshly sliced jambon de Paris (hence its nickname ‘le Parisien’).

Nevertheless, the jambon-beurre started to lose popularity a decade or so ago as restaurants across the country began putting the hamburger on their menu. No longer just the fare of fast-food chains such as ‘MacDo’, it became a canvas for chefs to show off their culinary prowess. Burgers are now made with top-notch ingredients and often ‘Frenchified’ in order to boost their gourmet appeal. They’re served on brioche and fancied up with comté or roquefort, black truffle and even foie gras. Logically, all this goodness doesn’t come cheap: Le Dalí in Paris once had a burger on their menu with a whopping price tag of €42 (frites not included). Chez Aline (Rue de la Roquette) still makes one of the best jambon-beurres in the city and won’t set you back more than €5.

Since 2017, more hamburgers have been sold in France than jambon-beurres. According to hospitality marketing company Gira Conseil, the French ate 1.46bn hamburgers versus 1.22bn jambon-beurres that year. French culinary experts blame it on the Americanisation of society, although most French will not readily admit to that.

Today, hamburgers are found in 80% of restaurants in France, even those with Michelin stars. Appetising as some may sound, they have little to do with French gastronomy. Therefore, I encourage you to do your part to keep this food tradition alive. Opt for the jambon-beurre and order it in its most authentic form: no mustard, cheese, tomato or wilted lettuce leaf. These ingredients would irreverently ruin the perfect trinity of bread, ham and butter, precisely what makes it so special – and so exceptionally French.

From Salade Niçoise to Socca – 7 facts about Cuisine Nissarde

Paradise found: The simple pleasures of a French cheese shop

Previous Article Christo and Jeanne-Claude’s L’Arc de Triomphe, Wrapped to transform Paris landmark
Next Article Back to school 2021 in France