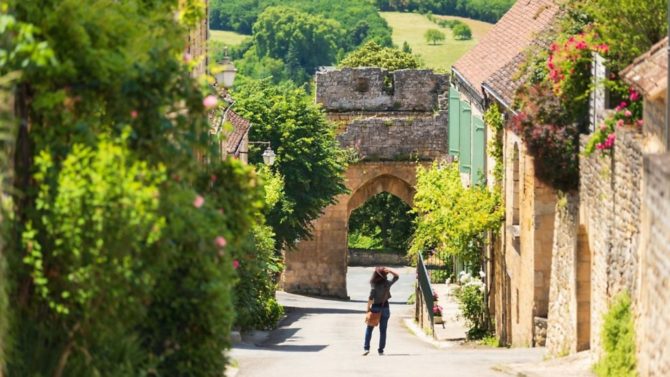 To discover France’s medieval heritage, there’s no better place than the network of bastide towns scattered across the bucolic south west. These planned, fortified towns were constructed in the 13th and 14th centuries and usually have a grid-like layout. Here are a few of our favourites – let us know yours, too!

Small in stature yet huge in character, Monpazier flip-flopped between French and English rule since its creation in 1284. Visually, little has changed here over the centuries, and its appealing orthogonal layout has inspired many architects. Spend a few hours wandering along the narrow streets and be sure to pick up some goodies at the market at Place des Cornières. There’s also a fascinating museum, Le Bastideum, dedicated to the history of these special towns.

Overlooked by a magnificent, albeit partly ruined, château, Najac in Aveyron is one of the bastides du Rouergue, along with the equally gorgeous Villefranche du Rouergue and Sauveterre du Rouergue. Be transported back to the village’s medieval heyday in a lively visit to the château, or visit the Saint Jean L’Evangéliste church, built in typical southern Gothic style.

This Tarn treasure was one of the first southern towns to officially become a bastide in the 13th century. Towering above the surrounding valley, among the clouds, there is something magical about a trip here – and it seems that the celebrities agree, with the likes of Johnny Depp and the Rolling Stones’ Keith Richard among its admirers.

Deep in rural Landes, this peaceful bastide was founded in 1291. Its crowning glory is without a doubt the Place Royale, the soul of the village: marvel at its beautiful archways and colombage houses. It’s even claimed that this square inspired Henry of Navarre in building the Place des Vosges in Paris.

This extremely well-preserved bastide in Dordogne is famous for its links with the Knight Templars, who were imprisoned here during the 14th century – you can even see their graffiti etched on the walls, surviving the centuries. Interestingly, this is one of the only bastides that isn’t rectangular in shape, but rather trapezoidal.

A vision of scarlet and white in French Basque Country, Ainhoa lies on the Way of St James and is a popular destination for pilgrims and holidaymakers alike. Although it suffered severe damage during the Thirty Years’ War in the 17th century, it’s a beautiful place to visit for a taste of dazzling Basque culture.

An insider’s guide to Dordogne

Dive into a wellbeing escape on the Atlantic coast