Discover the new locations in the Tour de France 2020 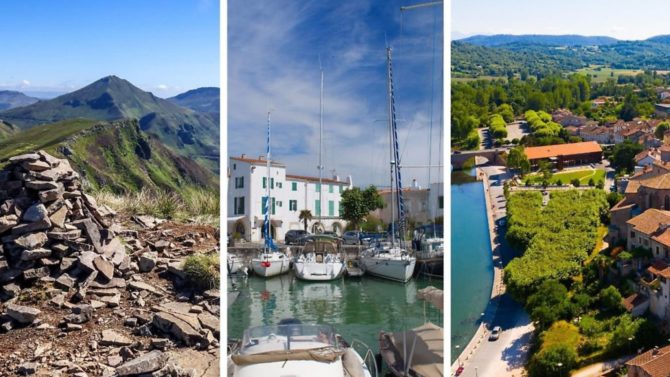 There have been 12 new places chosen this year to be stage cities and sites for the rescheduled 2020 Tour de France which is due to set off from Nice on 29 August 2020 and run until 20 September 2020. Crowds won’t be able to gather as usual to cheer the cyclists on, but the competitors’ feelings will still be running high when they set foot, or wheel, in these start and finishing points each day.

It is on stage six, a 191km hilly route, that the first of the new stage cities will be reached. The small town of Le Teil in Ardèche is found on the east bank of the Rhône river, on the other side of which and directly accessible by road, is the larger city of Montélimar. Although, the peloton will be keeping east of the river and heading south-east to climb Mont Aigoual via Anduze and le Vigan.

Stage six will finish at a height of 1,560m, the highest point in the department of Gard. At the top of Mont Aigoual is a fort like building housing a weather station and museum that attracts thousands of visitors each year. If you visit the site on foot there are numerous marked trails to explore or take the 4,000 steps challenge up the southern slope.

Stage eight, which will lead the cyclists down to the Pyrenees, will start this year at Cazères-sur-Garonne, a town shaped by the winding path of the Garonne river, with docks that are great for walks and fishing as well as canoe and pedal boat hire. It has earned the Station Vert label and is on the Via Garona cycle route.

At the end of Stage 10, the tour will for the first time visit Île de Ré, an island accessible by road off the coast of La Rochelle. St-Martin-de-Ré is a calm and sunny harbour town surrounded by late 17th-century Vauban fortifications and filled with hotels, cafes and restaurants with outdoor terraces popular with tourists.

Just a little way down the coast from La Rochelle is Châtelaillon-Plage, which will be the starting point for stage 11; a 167.5km flat stage that with see the peloton travel inland to Poitiers. The cyclists will have already passed the 3km-long fine sandy beach and Belle Epoque seaside resort during the previous day’s coastal stage. While it’s unlikely the athletes will partake in an ice-cream, they may enjoy taking in the views of Fort Boyard and the island of Aix.

Just 20 minutes from the Futuroscope theme park, the medieval town of Chauvigny is the starting point for Stage 12, the longest stage of the competition at 218km. The town has two parts, the lower town sits around the Vienne river while five partially ruined fortified castles sit among the narrow streets of the upper town. The Poitou-Charentes porcelain industry also originated here.

At the northern entrance of the Parc naturel régional des Volcans d’Auvergne in Puy-de-Dôme, the spa town of Châtel-Guyon will be the starting point for stage 13. The spring water in the town is rich in magnesium and in the 1920s drew nobility from across the globe to the thermal baths, while an updated spa resort is due to open here later this year.

Located in the heart of the Cantal Massif – the largest extinct volcano site in Europe, the tour will finish stage 13, a challenging mountain stage involving climbing a total of 4,400m across several hills, at the 1,589m-high Pas de Peyrol on Puy Mary.

Already a popular cycling destination, with four options for routes to the top, this will be the first time Grand Colombier in Ain is used as a stage site in the Tour de France, appearing at the finish of stage 15. The peak is located in the lush green Jura mountain region in the east of France.

Just 20 minutes south of Geneva, La Roche-sur-Foron in the centre of Haute-Savoie is a colourful industrial town with plentiful shops and services and surrounded by beautiful mountains. The town will surely be a welcome sight to the cyclists after they travel the gruelling 175km of Stage 18 through the Alps from the Méribel ski resort.

Lure is a quiet town with a population of just 8,500 in the serene rural department of Haute-Saône but Stage 20 of this year’s Tour de France will be fast and furious. The only time trial of the competition, racers will be pumping themselves up at the start line in Lure ready to sprint the 36.2km to La Planche des Belles Filles.

The final stage of the 2020 Tour (stage 21), will end at Paris Champs-Élysées as is tradition, but will start in another town that also sits on the Seine, which has a royal history and was briefly considered the capital of France in the 16th century when King Henry IV based himself there. Mantes-la-Jolie is situated in the Yvelines department north-west of Paris in Île-de-France, and boasts some beautiful architecture including the gothic Notre-Dame de Mantes-la-Jolie.