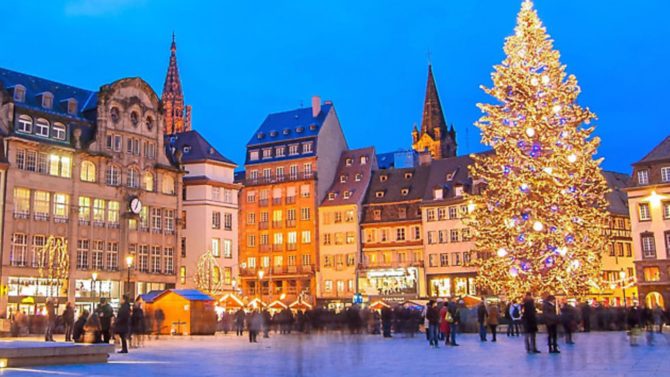 Thinking of spending the Christmas holidays in France? If ever you need convincing, we’ve found 12 reasons why you should

The French Christmas markets are among the most beautiful and largest in Europe. They are mostly in Eastern France with the oldest one taking place in the pretty city of Strasbourg and gathering nearly 300 stalls or artisan food and traditional toys. Colmar and Mulhouse’s Christmas markets are also highly recommended and are wonderful places to soak up the Christmas spirit.

Unlike in the UK, when the day consists of a last-minute dash to the shops after work, Christmas Eve in France is when the real celebrations happen. The French gather for a huge meal called Le Réveillon, which derives from the word ‘réveil’ meaning ‘waking’. The meal stretches on late into the night with a break around midnight, when the children can finally open their presents.

Although every culture feasts during the Christmas period, the French go all out when it comes to Noël and the shelves and stalls of supermarkets and markets are stocked with festive fare. Foie gras, oysters, snails, frogs legs, truffles or scallops all appear in preparation of the French Réveillon, but you’ll also find unusual meat like deer, boar, pheasant or even ostrich. The idea is to eat differently than the rest of the year and to splash out on luxury ingredients. Yum!

4. An excuse to enjoy more wine

As with the food, the French like to change and enjoy particularly nice vintages for Christmas. It’s also the time to enjoy some bubbles so Champagne and Crémants will be on offer everywhere. Sweet wines and liqueurs are also popular during that period thanks to delicious parings with foie gras and cheeses for example. Santé!

5. A white Christmas in the mountains

France is probably the Brits’ favourite ski-holiday destination but can you imagine waking up to a sparkling white Christmas in a beautiful snow-covered mountain village? There are many chalets to rent in the French mountains, especially in the Alps, so your vision of a perfect wintery Christmas Day is more easily reachable than you think.

6. Christmas is less commercial in France and more focused on family and food

Of course, there is a commercial side to Christmas in France but the celebrations are above all a time to get together. Families will often travel far to visit relatives from both sides of the in-laws who can sometimes live at the other side of the country. During the big Christmas Eve dinner, they gather in large merry groups around the table to enjoy a copious dinner.

During the period running up to Christmas, the front windows of boulangeries and patisseries turn into beautiful displays of glistening cakes and colourful pastries. The centre of attention however are the bûches de Noël, or logs, made out of every type of chocolate there is or with fruit and cream. These decadent cakes consist of a light sponge coated in chocolate or cream which is then rolled to make a log. It is then iced with more chocolate or cream and decorated to look like a log. It’s the usual dessert course during the Réveillon.

If you’re in the mountains during Christmas and a skiing family, there’s no better way to end the celebrations on the day than with a good ski session. You might even spot some strange creatures in the French ski resorts: many people like to dress up for their Christmas ski session and whizz down the slopes dressed as Father Christmas or Chewbacca!

We all know that Paris is always a good idea, but during the festive period, the French capital is even more magical. Highlights include the Galeries Lafayette’s stunning Christmas displays on the windows and inside the shopping gallery, the Champs-Elysées Christmas market, the Big Wheel on place de la Concorde and the ice rink outside the Hotel de Ville.

10. A warmer Christmas down on the Riviera

If you’re not one for the chill and snow, then you could also enjoy a mild Christmas on the beautiful French Riviera where the festive season is in full swing just without the freezing cold weather. You could even enjoy the traditional food and customs in Provence which differ slightly to the rest of the country.

If you manage to be in France before Christmas, there’s plenty of festivals and events to celebrate the winter season. The biggest is probably the astonishing Fête des Lumières in Lyon where all the buildings are brought to life with music and light shows. The French even honour the poor bird we devour on Christmas day with the turkey festival in Licques, Nord-Pas-de-Calais.

12.The decorations and lights in villages

Not every town in France will have a Christmas market, but you can be sure that they will all have some form of festive decoration, whether it’s a big Christmas tree on the main square, a life-size crib or lights illuminating the streets. People also take great care in decorating the outside of their homes.

This is why you should visit Paris at Christmas