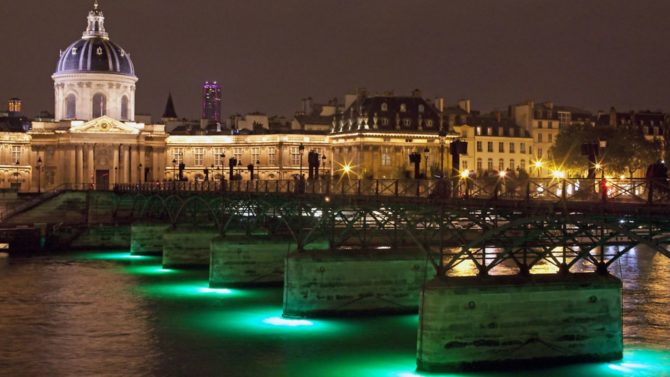 There’s no better excuse to lose out on your beauty sleep than Nuit Blanche, the all-night-long art festival that has been taking over Paris on the first Saturday of October since 2002. This year visitors to the French capital can expect to see installations, exhibitions, street art, light and sound shows plus musical performances and concerts popping up all across the city from dusk till dawn.

The Fête de la Crevette in the commune of Honfleur in Normandy’s department of Calvados is one of France’s best-known food festivals .The shrimp is the star of the show at this traditional festival and the local speciality, crevette grise is celebrated along with the town’s maritime culture through performances of sea shanties, an arts and crafts market and cooking demonstrations of local fish recipes. If you’re not a lover of seafood, you certainly won’t go hungry – there are plenty of French cheeses, meats and breads to go around, while the display of fishing boats along the Vieux Bassin quay will delight visitors young and old.

How to celebrate the vendange in France

Named after the two medieval towers that guard the entrance to the old port of La Rochelle, the Jazz Entre les Deux Tours festival started in 1998 and has been welcoming hundreds of jazz musicians and music fans ever since. The annual festival takes place in concert venues all across the historic harbour town. Festivities include dinner concerts, educational activities and photo exhibitions. The festival boasts a stellar line-up of national and international jazz musicians who perform at free and ticketed events in and around the town.

Taking place in the Basque region of France, this 40-year-old gourmet pepper festival welcomes over 20,000 visitors. Daytimes see dancing displays and market stalls groaning with peppers and other local produce, while by night restaurants serve special menus centred around the famous pepper and concerts are given in the village church.

Chocolate lovers will think they have died and gone to heaven if they’re lucky enough to visit the Salon du Chocolat in Porte de Versailles in Paris. Themed around chocolate, cocoa, ice cream and pastries, the event is the world’s largest celebration dedicated to chocolate with over 700 exhibitors that include both French and international chocolatiers, artisans and manufacturers from the industry. There is also a fashion event showcasing a collection of couture chocolate creations.

Legend had it that the traditional tart from the Pays Basque region, Gâteau Basque, originated in the village of Cambo-les-Bains in Pyrénées-Atlantiques in the far south-western corner of France. Every year, the town celebrates this much-loved cake with the popular Fête du Gâteau. Around 14,000 visitors are expected at this year’s festival, giving the opportunity to sample the very best Gâteaux Basques and even learn how to master the recipe for themselves.

Attracting one billion worldwide television viewers and 50,000 spectators, the Qatar Prix de l’Arc de Triomphe has rightly earned its self-proclaimed title of the ‘greatest horse race in the world’. France’s most important equestrian event takes place at the prestigious Chantilly racecourse overlooking the beautiful Château de Chantilly, where world-class jockeys and their thoroughbreds will compete in this hotly contested competition. The style states are also high, especially when it comes to the ‘Most Beautiful Dup’ contest, a competition that rewards the most elegantly dressed couple with extravagant prizes including a trip to Qatar.

On a crisp autumnal day, nothing beats snuggling up with a good book, and this October bookworms will be spoilt for choice at the annual 25e Heure du Livre book festival in the town of Le Mans. Running since 1978, the event, which has been a celebration of all styles of writing, welcomes some 200 authors, 80 publishers and 30,000 visitors. While part of the event is dedicated to French-speaking literature celebrating the country’s written work with debates, music, exhibitions and workshops, the other part is open to all forms of writing including some comic strips, science fiction and crime novels so you can let your imagination run wild.

This is why you should visit France in the autumn

Quiz: How many of these French experiences have you had?

From Spiderman and Elektra to Hans Solo and X-Men, some of the world’s most popular superhero figures will descend upon Paris for the city’s second edition of the pop culture convention, Comic Con in the Grande Halle de la Villette. The action-packed programme offers the chance for fans of sci-fi TV, film and comics to meet comic book creators, artists, actors and movie-makers. The best costume will be decided at the cosplay contest, and the winner will be rewarded with a chance to compete at the world championships in Chicago.

Join the residents of the famous Parisian quarter of Montmartre as they celebrate the grape harvest, a tradition in place since 1934. Now in its 83rd year, the Fête des Vendanges de Montmartre is bursting with wine-tasting sessions, food stalls and an end-of-week fireworks display and dancing extravaganza.

With all those lovely harvested apples from the orchard, autumn seems like the time to be drinking cider. What better excuse then, to go to the Fête du Cidre in the picturesque village of Beuvron-en-Auge in Calvados? Visitors can browse market stalls selling local Normandy specialities, enjoy live folk music and see how the local brew is made. Of course, there is a variety of cider to taste, and you can always buy a few bottles to take home with you.

For three days in October, the town of Lille comes alive with the beat of techno music for the electronic music festival N.A.M.E. This intimate festival features concerts held in various locations around Lille including a former goods station. In addition to securing some of the genre’s biggest names, the festival is also a springboard for emerging new acts, showcasing a range of up-and-coming talent. Festival-goers are encouraged to nurture their musical aspirations with masterclasses in electronic music that offer participants the chance to perfect their knowledge of house, techno and disco music.