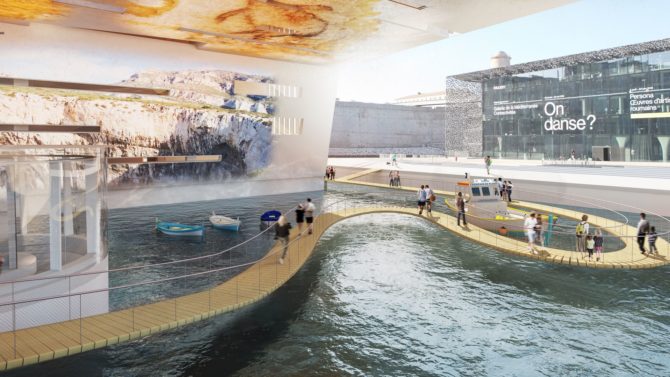 Move over, Lascaux – there’s another exciting cave replica stealing the limelight in 2022. A faithful reproduction of the Grotte Cosquer, which now lies 37 metres below sea level in the Mediterranean, is set to open in June 2022 on Marseille’s Esplanade J4.

The original Grotte Cosquer is home to some 500 works of prehistoric cave art, dating from 33,000 and 19,000 years ago. It was once above sea level in what is now the Calanques National Park, a stunning series of creeks and coves along the Mediterranean coast between Marseille and Cassis.

Its existence was discovered by Henri Cosquer, a professional diver from Cassis, in 1985. Its discovery was made official in 1991 and it was classified as a Monument Historique. Today, it is closely monitored and closed off to the public for fear of damage. Rising sea levels are threatening the original cave – the waters have already seen off some of the ancient engravings, and marine pollution isn’t helping matters.

In a complex a stone’s throw from Marseille’s famous MUCEM (Museum of European and Mediterranean Civilisations), the replica of the Grotte Cosquer promises to be a truly immersive experience. Visits will begin with a stroll over water, where visitors will spot Henri Cosquer’s original diving boat. Then, they’ll visit a mock-up of his diving club, with all the equipment he used thirty years ago.

Things get even more exciting as visitors will then be able to explore the replica in small, autonomous exploratory vehicles on a journey below sea level, transporting them back to Henri Cosquer’s discovery without any need for diving gear.

Afterwards, in an exhibition hall, there will be a display of extinct animals and a section on climate change’s impact on the environment and rising sea levels. Visitors will also be able to enjoy the 400-seater amphitheatre where a film of Henri Cosquer’s adventure will be shown.

In preparation for its 2022 opening, a dedicated team of artists have been working on producing the replica since autumn 2020. These artists also worked on reproducing the Grotte Chauvet in Ardèche and if you’ve ever visited there, you’ll know we can expect great things from this new Marseille venture.

How to visit the Grotte Cosquer

The Grotte Cosquer will open on 4th June 2022 in Marseille’s new Villa Mediterranée on the J4 Esplanade. More details about opening times will be released nearer the time. Keep an eye on the Grotte Cosquer’s website for up-to-date information.