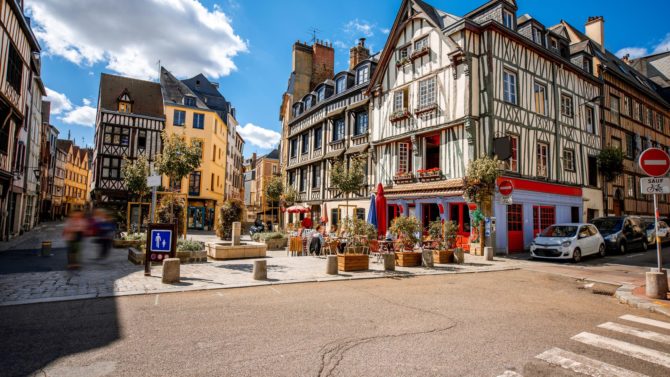 Rouen has been named ‘Unesco City of Gastronomy 2021’, becoming the first French city to be recognised for its outstanding cuisine. The Normandy capital’s success follows a long application process which culminated in a final submission in June 2021 to have Rouen join Unesco’s ‘Creative Cities Network’ in the field of gastronomy. Alongside 48 other cities around the world, Rouen was awarded for its creativity and progress in sustainable urban development on 8 November by Audrey Azoulay, the Director General of Unesco.

“Rouen’s new status as a Unesco City of Gastronomy represents an opportunity for the city’s economic, tourist and international attractiveness,” commented Rouen mayor and President of the Metropole Rouen Normandie Nicolas Mayer-Rossignol and Sileymane Sow, Deputy Mayor and Head of Trade, Economy, Attractiveness and International Relations. “In line with the United Nations 2030 Agenda, Rouen’s plan includes more equality between men and women, sharing awareness on how to eat well, north-south cooperation, inclusion and, of course, showcasing the excellence of Normandy cuisine. This Unesco classification is a real asset and we are proud to now belong to this network.”

Rouen’s candidature was supported by a compelling list of assets, including among others the importance and place of gastronomy in its history, and the impact, quality and diversity of the international cooperation initiatives it has developed in the field of gastronomy.

The city’s culinary credentials are certainly impressive. Rouen is home to the restaurant that is said to have inspired Julia Child to devote her life to promoting French cooking, La Couronne, which is also France’s oldest inn (it was founded in 1345), while the city’s annual Fête du Ventre (Festival of the Stomach) created in 1935 is held each year on the third weekend in October and sees the streets lined with producers in traditional local costume showcasing the region’s bounteous produce, from apples and cheeses to ciders and meats.

The Creative Cities Network was created by Unesco in 2004 and now includes 295 cities in 90 countries. Also representing France and joining Rouen on the list of 49 new cities is the southern city of Cannes on the French Riviera, which is recognised in the field of film.

Previous Article French property market: Prices rise in the provinces during record year
Next Article You can soon visit a replica of the world’s only prehistoric underwater cave