Why you should visit Lyon’s dazzling Fête des Lumières 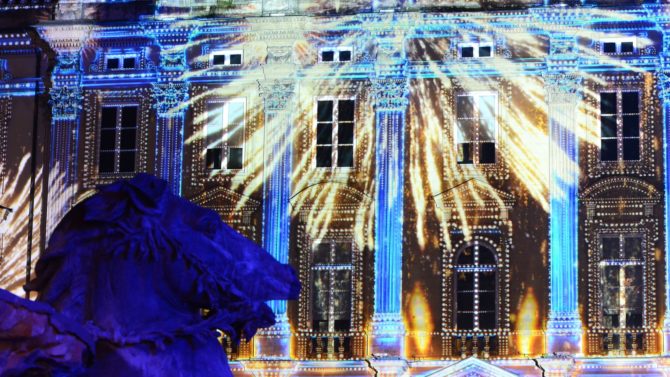 Lyon, la nuit. We’re in the deepest, darkest depths of midwinter but the streets are thronging with people. There are tourists, local families and office-leaving commuters all happily rubbing shoulders. They cradle hot chocolates and hug themselves against the cold but, most of all, they look up and marvel at the winter night.

I’ve come to join them in France’s third-largest city to witness the Fête des Lumières, the annual festival of light that illuminates Lyon in an artistic glow each December. The self-guided trail of light-art installations makes for a spirit-lifting nocturnal journey through the city alongside the annual Christmas market. It’s big business, too, the four-night festival accompanied by a global symposium about the use of light in urban planning. The festival celebrated its 20th anniversary in 2019 and has inspired spin-off events in places as diverse as Quito, Bucharest and Shanghai. Indeed, the British cathedral city of Durham now hosts its own bi-annual Lumiere festival.

“Lyon is the mother of all light festivals,” said the event’s white-haired creative director Jean-François Zurawik. “For me,” he added, “the battle between light and darkness has always been fundamental to the human condition.”

But how did Lyon, or Lugdunum as it was founded by the Romans in 43AD, become the global centre for light art? The answer dates from the Middle Ages when the Lyonnais first placed lighted candles in their homes, praying to the Virgin Mary to save the city from plague. They reprised the gesture in 1852 when, during a winter of severe storms, the statue of the Virgin Mary at Fourvière cathedral came under threat. The city’s residents mounted candles on their windows to thank the Virgin for her guardianship of the city, giving rise to an annual ceremony, bringing light to the darkest hour. Hence, the festival now reaches its climax on the Virgin’s saint day.

Last year’s festival featured some 65 light creations across 35 exhibition sites. Many used the historic buildings of Old Lyon, including its traboules or passageways leading between the Renaissance buildings, as an artistic canvas. The city creates a completely new set of installations each year with the invited artists asked to specifically respond to the space.

I started following the art trail at dusk, beginning by the tourist information office on Place Bellecour. The soothing installation, Ephemeral Prairie, featured a landscape of illuminated swaying pampas grass with giant, kite-like flying fish swirling above our heads. From here, I headed to the west bank of the River Saône to watch the Dream Catchers projection, a cautionary tale about the importance of water, played out on a giant scale across the hillside of Vieux Lyon towards the Basilica of Notre-Dame de Fourvière.

The most striking installation of all, however, was Lightning Cloud, which dominated the space outside the theatre on Places des Celestines. The giant metallic cloud fizzed with light particles before projecting a dramatic storyboard onto the façade of the theatre, an allegory for the way our personal data has become our most valuable commodity.

Lyon, straddling the Rhône and Saône rivers, makes for an engaging winter city break with its riverside walkways, efficient public transport network and its respect for the food-loving legacy of the chef Paul Bocuse, the city’s most famous son who died in 2018. The Fête des Lumières serves as a colourful backdrop to sampling the nose-to-tail cuisine in the city’s famous bouchons, rustic, bistro-style restaurants known for their hearty fare, and exploring the city’s attractions.

The festival itself is set to go from strength to strength but, after 15 years in charge, Jean-François Zurawik has since retired from his current role to work on expanding the project across the globe. His work, he assured me however, is not done.

“We need to find new ways to bring light into our cities in a more creative and imaginative way,” he said. “I’m looking for new, creative ways to reduce our exposure to artificial light.”

“I believe,” he added, “We need to move towards light with more aesthetic and more emotion.”

Where to stay for the Fête des Lumières, Lyon

Hotel Fourvière: A former 19th-century convent, it’s a peaceful spot with minimalist design and fine city views, located near the Basilica of Notre-Dame; doubles from €159, breakfast €20.

OKKO Hotel: A central, mid-range property, OKKO-branded hotels include access to a lounge with a free nightly apéritif and snacks; doubles from €104, breakfast included.

Where to eat during the Fête des Lumières, Lyon

Les Halles Bocuse: The three-floor market, named after the city’s most famous chef, is a prime hunting ground for regional cuisine with a range of places to sample local dishes. Open Tues-Sat 7am to 10.30pm, 1pm Sundays.

Previous Article You can soon visit a replica of the world’s only prehistoric underwater cave
Next Article What happens when someone dies owning property in the UK and France?