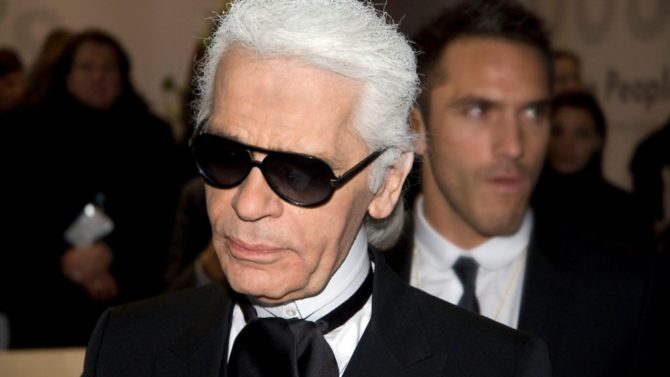 The celebrated and eccentric head of Chanel, Fendi and his own eponymous brand has died in his beloved France.

Karl Lagerfeld was born in Hamburg, Germany some time around 1933. The actual year of his birth, and indeed details of his upbringing are shrouded in the type of mystery one might expect from the man. Lagerfeld finished his school education in Paris, studying drawing and history. His first foray into the fashion world was in 1955 when he won a competition to design a coat. This led to a burgeoning friendship with Yves Saint-Laurent and a job with Balmain. Lagerfeld had secured his place in the fashion world, albeit as an assistant and then apprentice.

Lagerfeld spent time as artistic director at Jean Patou and designed work for Chloé, Charles Jourdan before being hired by Chanel in 1982 to be their creative director. Chanel was struggling at that point, after the death of Coco Chanel a decade earlier, and Lagerfeld was taken on to reinvigorate the iconic French brand. Amongst many innovations and ideas, Lagerfeld was responsible for revamping the brand’s Pret-a-Porter range and also the widespread use of the famous interlocking C’s as a pattern. Chanel’s chief-executive Alain Wertheimer credited Lagerfeld with a transformation of the brand after he joined.

Aside from being one of fashion’s leading lights in terms of heading up several of the industry’s most famous brands, the man himself was as intriguing/controversial/charismatic/just plain odd as the world of high fashion could ask. Known for frequently courting controversy with un-PC comments on various topics, he was as outspoken and bold as his designs.

Lagerfeld is also famous for his adoration of his beloved cat Choupette, a blue-eyed Birman that accompanied him on many official visits, including frequently flying all over the world with him. The famous feline has an Instagram following of over 120,000. As time passes, it is looking increasingly likely that the majority of Lagerfeld’s extensive £150million fortune may well go to Choupette herself, if she has been nominated as the designer’s “heir” under German law. Pampered puss indeed.

French fashion- a world of larger-than-life characters, where Karl Lagerfeld was arguably one of its most memorable.