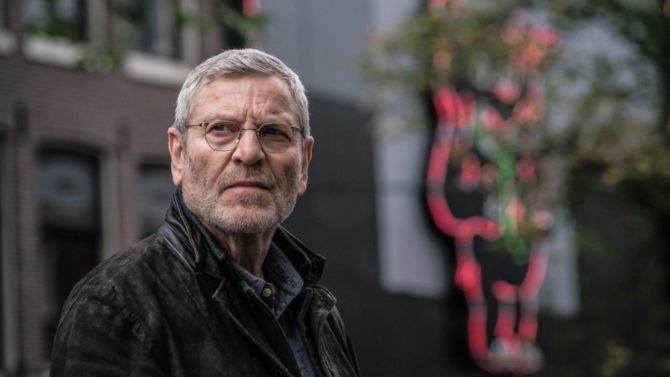 Julien Baptiste, the never-quite-retired detective, first appeared in The Missing series one and two and is back in the titular role for BBC One’s new Sunday night drama Baptiste.

This time he is staying in Amsterdam where his daughter has recently had a baby. Forever under their feet and restless, he is invited to meet up with old flame, Martha Horchner, the chief of police in Amsterdam.

She wants his help to find a missing girl, Natalie, the niece of Englishman Edward Stratton, played by Tom Hollander. Julien meets up with Edward and they begin their search, but it’s not long before Julien realises that all is not as it seems.

French-Turkish actor Tchéky Karyo reveals why he is excited to be back as Julien Baptiste.

Tell us about the character of Julien Baptiste? What is his situation at the start of the series?

At the end of series two of The Missing, we leave Julien Baptiste on the operating table about to undergo an operation for the brain tumour that has dogged him throughout the series. We discover that he has survived another day, is ready to tackle more challenges, and has found a new lease of life spending time with his wife and family.

What sets this series apart from the Missing?

The DNA of The Missing series one and two is still rooted in the story of Baptiste. We are still very much in the same world as The Missing but we see things through the eyes of Julien. Julien is still stubborn, but he has a lot of empathy for people and is still searching for the truth about human nature. Julien still has to deal with missing people, and also with characters having to deal with difficult journeys.

How would you describe Julien’s relationship with Edward?

When Julien meets Edward he sees a man carrying deep pain, sorrow and sadness, which leads Julien to feel compassion and empathy for Edward. However, there are too many question marks surrounding Edward’s behaviour which leads Julien to delve deeper, proving that his instincts are still intact, as there are a lot of shadows behind Edward.

Tom Hollander has a vivid spirit which is a great quality in an actor, so to work in an ensemble was good.

How does it feel to have carried the character of Julien Baptiste from The Missing through to the new series?

I feel proud of it. The audience, the BBC and the writers, Harry and Jack Williams, didn’t want to say goodbye to Julien Baptiste. The brothers said that Julien still had a lot of skeletons in his closet and a lot of things left to be fixed.

It is exciting and I am happy to get into Julien’s new shoes. It is fantastic to develop a relationship with an audience and to be part of the team again where there is great synergy. Julien is still here and full of joy and happy to be alive. He is still stubborn and is always in search of some kind of truth about human nature, if there is one.

Are there any preparations you have to get into character?

For this role a lot of work goes into following the writing and catching all the little exchanges and nuances to tell the story with so many twists. I also day by day try to improve my English. A lot of my work takes place at my table with my coach, who helps me get to grips with the words as much as possible to make the language mine. It’s a great challenge that I am glad to go through each time I am called to walk in Julien’s shoes.

What was your most challenging scene and favourite?

The challenging scenes for me are mainly the dialogue scenes. These scenes are quite long and there is a lot to get across to the audience without saying or being obvious. I would say my favourite scenes or the scenes I like to shoot are the ones that are outside, especially when we are on the boats. I love being able to feel the movement of the water.

Why should viewers watch Baptiste?

Baptiste is a show that has a lot of depth and it is always good to see the characters growing and developing and continue the adventure of The Missing. Although a different show, it still has The Missing at its core.

Baptiste is on BBC One at 9pm on Sundays or catch up with the series so far on iPlayer.

How Maigret became a French icon