Top reasons to visit Toulouse in 2019 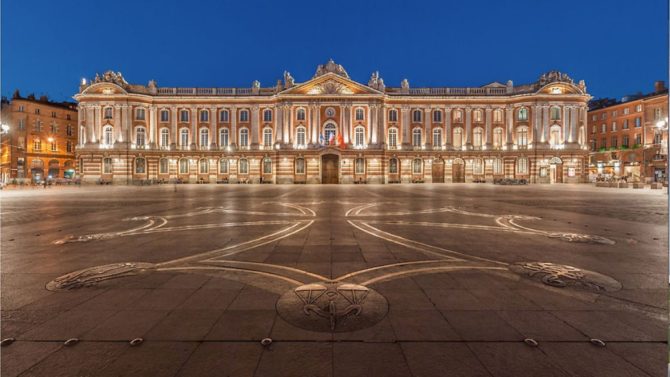 From Minotaurs to moon landings, we’ve picked out the must-see events in La Ville Rose this year

France’s iconic cycling race Le Tour de France is returning to Toulouse for the first time in a decade in July. Stage 11 of the famous race will start in the small city of Albi on 17 July 2019 and, after 167 kilometres of pedalling, the cyclists will arrive in La Ville Rose. A particularly tight sprint around the Capitole building to the finish line is sure to create a dramatic atmosphere in the main square. After an overnight rest, Stage 12 begins the next day from Toulouse and heads into the Pyrenees for gruelling mountain climbs as the cyclists head for Bagnères-de-Bigorre. The race is one of the most popular annual events in France and people travel from all over the world to see the world class cyclists compete at the highest level. For mere mortals, Toulouse has plenty of more sedate cycling options to enable you to see the sights, with one of the best being the Canal du Midi, a UNESCO World Heritage Site.

The Cité de l’espace is launching a new exhibition called Moon Episode II to mark the 50th anniversary of man setting foot on the moon for the first time on 20 July 1969. The exhibition, which begins on 20 April 2019, will allow visitors to relive the mission of Apollo 11 and learn about the challenges that NASA had to solve to make the mission a success 50 years ago. Part of the celebrations of the momentous milestone is a special Moon Party on 20 July 2019 which will bring back to life the chronology of the stages which enabled Neil Armstrong and Buzz Aldrin to walk across the lunar surface. Events will be on offer all day to help explain the key moments of the lunar voyage and meet witnesses of this grand human and technological adventure.

Toulouse has an important and enduring connection with artist Pablo Picasso and city museum Les Abattoirs is hosting a major exhibition on the theme of Picasso and the Exodus. The Spanish artist was a major patron of the city’s central hospital and gifted several of his artworks to the city. Les Abattoirs, situated on the banks of the river Garonne, even has the Picasso room. Picasso et l’Exil is available to view between 15 March and 25 August 2019, and contains a range of symbolic work including The Corpse of the Minotaur in Harlequin Costume which featured in the play Le 14 Juillet by Romain Rolland and is only presented once every two years for conservation purposes. As the name suggests, Les Abattoirs is a former slaughterhouse which opened as a museum in 2000. It now houses a wide collection of art with regular changing exhibitions.

If you are looking for a fun form of transport with a difference, then La Halle de la Machine is the place to go. Astérion is the city’s resident Minotaur and is waiting to greet visitors who can go for a ride on his back around the Piste des Géants (Giants’ Runway) which was historically used by the pioneers of the Aeropostale airmail service. You can’t really miss the horned beast, standing at 14 metres tall, battle-scarred and with smoke blowing from his nostrils, its an eye-catching sight for passengers and those on the ground. The mythological Minotaur has a two-storey Greek temple on his back for people to stand in and the attention to detail is incredible, with multiple moving parts and small touches like eyelashes artistically created by the talented machinist team. Beware, living alongside Astérion is a twenty metre spider with moving eyes which spits out water – you have been warned!

This year marks a major milestone in Anglo-French aviation history as 2019 is 50 years since the maiden voyage of Concorde from Toulouse. The iconic aircraft was constructed in Toulouse and Filton near Bristol and it was in the south-western French city that the first test flight took-off. Reaching speeds of 250 knots and travelling at an altitude of 10,000 feet, Concorde was capable of crossing the Atlantic in under three hours. To mark the anniversary, Toulouse’s Musée Aeroscopia will be hosting events including talks and tours, creative workshops, films and exhibitions, as well as flight simulator sessions and paper plane-making workshops for children. Visitors will also get the chance to board and sit in the cockpit of Concorde F-BVFC. A total of 20 Concorde aircraft were constructed in Toulouse and a series of events is being held at the Musée Aeroscopia on March 2, 2019 to mark the anniversary.

La Ville Rose’s love of the oval ball stretches back many years and will be celebrated when the city’s main square, the Capitole, is turned into a rugby pitch for the final of the French Championships Top 14 rugby union. A range of tournaments and training sessions – to introduce the sport to the youngest fans and for adults to learn more about the sport – will be organised across the weekend, ending with a friendly match for kids and former rugby professionals. A rugby photography exhibition will also feature around the city streets. Stade Toulousain are historically one of the most successful rugby clubs in Europe having won the European Cup a joint-record four times and after a period in the wilderness are now looking like potential champions again with a crop of exciting young players coming through.

Toulouse has provided inspiration for many famous artists, not least Picasso himself, but a more modern art form is popular in the city and fortunately, its something you can enjoy free of charge. Toulouse was a pioneering graffiti city with the Arnaud-Bernard quarter one of the best places to spot creative and colourful street art. It is a medium that has grown quickly and become more accepted as an art form in recent years. It began its rise in Toulouse in the late 1980s with artists influenced by New York hip-hop culture and it was in the Arnaud-Bernard quarter that an artists collective called Truskool created art on the walls of a disused tobacco factory. Their work and reputations grew and influenced many others as street art began to emerge all over Toulouse, seeing yesterday’s ‘vandals’ becoming renowned artists in their own right. The website streetartcities.com is a great tool to find the best street art in towns and cities all over the world and is a great navigational tool to find your way around Toulouse’s premier works.

If you liked this article, try these as well:

How does the Post Office help communities in France?

Gap widens between city and countryside house prices in France