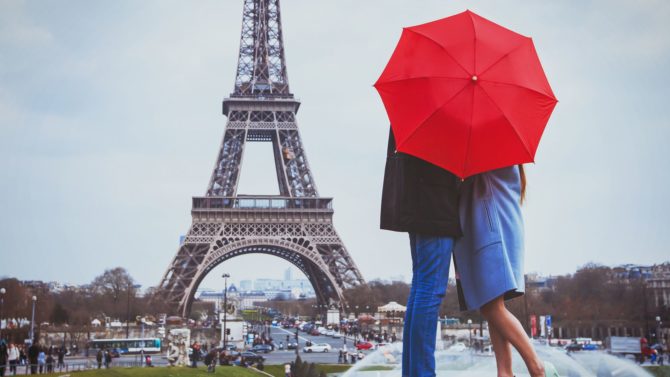 The Wall of Love can be seen in the Jehan Rictus garden, located in the Montmartre area of Paris. The 40m2 art installation featuring the words ‘I love you’ in over 250 languages, written on 612 squares of enamelled lava. While walls are usually made to divide and separate, this work of art created by Frédéric Baron and Claire Kito has become a meeting place for lovers. The bursts of colour are said to represent pieces of a broken heart, symbolising the human race which has been torn apart and the wall tries to bring back together.

Le Pont des Amours in Annecy spans the Canal du Vassé and connects the Esplanade du Pâquier with the Jardins de l’Europe. Originally a wooden structure when it was built in 1845, it was rebuilt in its current steel form in 1907. According to legend, two lovers who kiss in the middle of the bridge will be together for life, or you might find the love of your life there.

Le Pont des Arts in Paris was the go-to place for couples visiting the French capital to show their love for one another by attaching a padlock to the railings and throwing the key in the Seine. Unfortunately, with the locks weighing increasingly heavy and the railings of the famous ‘love lock bridge’ starting to collapse, Paris authorities began removing the locks (close to one million of them weighing 45 tonnes) in 2015, and it is now forbidden by law to attach padlocks to the bridge.

The commune of Saint-Valentin in the Indre département of Centre-Val de Loire has declared itself the ‘Village of Love’ and dedicates not one but three days (12-14 February) to a romantic festival celebrating love and its Patron Saint. The village has also created ‘Un Jardin des Amoureux’ where couples come to stroll in the four hectares of park planted with trees and flowers. ‘Le kiosque des amoureux’ is a popular spot for photos, and couples can buy an engraved metal leaf to hang on a branch of the ‘arbre à coeurs’.

The Château de Villandry was bought by Spaniard Joachim Carvallo and his American wife Ann Coleman in 1906 and their restoration of its gardens was a labour of love. As well as a Kitchen Garden and a Water Garden, they created a Love Garden which was divided into four sections: Tender Love, Passionate Love, Fickle Love and Tragic Love, with a design that incorporated heart-shaped box hedges and pink, red and white flowers.

Located in the 9th arrondissement of Paris, the Musée de la Vie Romantique (museum of romantic life) is housed in a former hôtel particulier that was once the Paris base of Dutch-born painter Ary Scheffer. The museum’s collection includes paintings, sculptures and a plaster cast of Chopin’s hand, and has a floor dedicated to the life of the French Romantic writer George Sand, who was also known for her romantic relationship with Chopin.

Previous Article Rise of the mini château: petite prestige homes are all the rage in France right now
Next Article French icon: The delicious history of calissons d’Aix