Rise of the mini château: petite prestige homes are all the rage in France right now 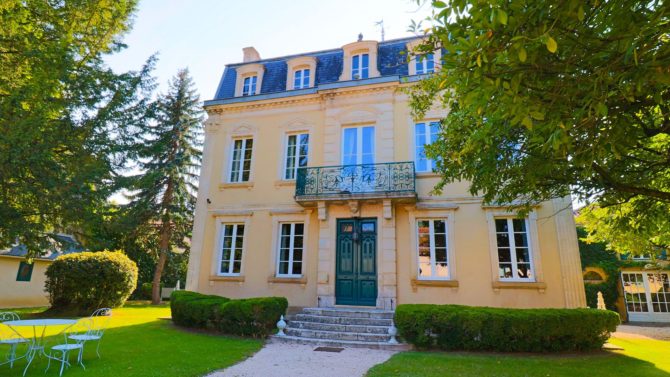 Spurred on by TV shows such as Escape to the Chateau and Chateau DIY, Brits have long lusted after affordable fairytale properties in France. Now it seems the French too are buying into the shoestring château dream.

According to the Mercure group, a luxury estate agency that claims to sell one in three French châteaux, sales of flashy multi-million-euro properties have plummeted by 20% over the past two years, mostly due to the pandemic-enforced absence of wealthy foreign buyers.

“The [luxury] market remains dynamic and lively. It’s just that expectations and the type of properties most in demand have changed,” he told the Figaro newspaper. “This trend can be explained by the desire of our clientele to acquire, at the same price as a flat in the city, a beautiful property in a rural or suburban area.”

You certainly don’t need to be a millionaire in France to pick up a grand-but-manageable residence with high ceilings, tall windows and at least echoes of Versailles or the Loire Valley. Looking for turrets and balconies? Pediments, plasterwork and parquet flooring? A sweeping entrance hall and vaulted wine cellar? Baroque-style oeil de boeuf windows or Renaissance-style facades? You’re spoilt for choice.

Not surprisingly, handsome homes not far from the capital have been selling particularly fast.

“For this budget of less than €800,000 euros, it’s madness with us at the moment for properties located up to 100km or even 150km from Paris,” confirms Marc Foujols who heads up a real estate network of the same name. “As soon as we bring in properties with character at this price, they go very quickly.”

Even though overseas buyers have been restricted by the pandemic, they are still getting a slice of the action.

“The increase in demand for this type of property has been staggering – with demand from both French and International buyers,” says Joanna Leggett, of France-wide English-speaking agency Leggett Immobilier. “You just need to look at the page views on our websites to see that buyers are browsing châteaux whilst sipping their cafes in Paris, London and New York.

“In the last two years, our French website has seen 1.1m views on URLs containing ‘chateau’ or ‘maisons de maitre’, whilst our English-speaking website has seen a staggering 6.8m views over the same period. Obviously real-life visits and sales are way up too.”

Samm Khoury, of south-west agency Richard Immobilier, saw her entire stock of small châteaux snapped up last year.
“They had been on the market for five or six years and then suddenly all sold for between €500,000 and €1m. And there is still demand,” she said. “However, those priced over €1m have not really moved much in the last couple of years.”

Many buyers have headed to rural Gascony in the south-west corner of France, where rolling hills, clean air and fertile land between coast and mountains are credited with giving locals one of the longest average life expectancies on the planet.

“Small manor houses and châteaux have been very affordable to clients leaving the cities,” says Edward Landau of Agence Le Bonheur. “In many cases, the proceeds from the sale of a modest apartment in one of the larger cities is enough to buy a very prestigious property here.”

“The abundance of stock that we were accustomed to only a few years ago seems to be a faint memory as agents and clients clamour to get hold of what is still available in the area,” added Edward. “We are starting to see prices move upwards with growth of around 8%  for the calendar year but I feel that this could accelerate due to the unprecedented level of demand.”

Previous Article Take a stroll in Gerberoy, France’s village of a thousand rose bushes
Next Article 6 of the most romantic French spots where love is in the air