4 legendary Christmas characters in France and where to find them 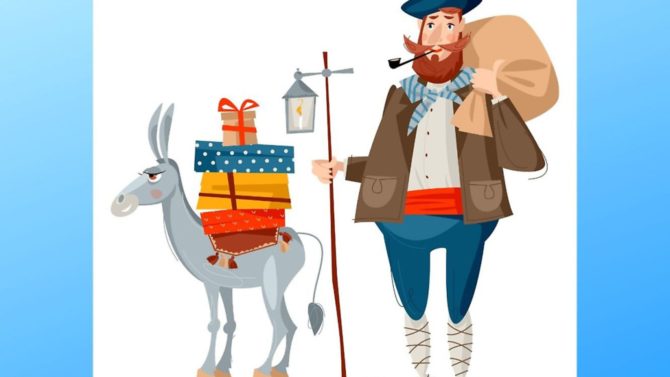 If you’re spending the festive season in France, you might bump into these legends of French folklore

What does her name mean? Aunt Arie

Where can I find her? Franche-Comté

Is she naughty or nice? Nice

This kindly fairy is said to be a reincarnation of medieval aristocrat Countess Henriette de Montbéliard. She is said to have white hair and wear traditional Pays de Montbéliard attire including a diari, an old-fashioned decorative headdress; in winter she is also seen donning a cape for warmth. Accompanied by her trusty donkey Marion, she acts as Franche-Comté’s very own Father (or should that be Mother?) Christmas, responsible for the presents of the lucky children living in the Pays de Montbéliard. You can meet her and Marion for yourself at the Marché de Noël de Montbéliard.

Where can I find him? North-east France

Is he naughty or nice? Nice

On 6 December, glee-filled children across France will be showered with gifts, sweets and biscuits as Saint-Nicolas and his friendly donkey arrive. The original Saint Nicolas was a Christian bishop, thought to be born in the 3rd century and had a reputation as a kind and charitable leader. While there is little known for sure about this man, many legends abound, including one about him bringing three boys back to the dead after a wicked butcher killed and pickled them (more about that soon). The Nicolas we know today has a long, white beard and wears silk robes.

What does his name mean? Father Whipper

Where can I find him? North-east France

Is he naughty or nice? Naughty

This mean-spirited chap is often seen with Saint Nicolas – but unlike his companion, he’s not someone you want to meet! On Saint Nicolas Day, his job is to give out lumps of coal to naughty children while Saint Nicolas gives out nice gifts to the well-behaved ones. He usually appears as a sinister-looking man with unkempt hair and a long beard, armed with a stick or a whip. He is said to be the evil butcher from the aforementioned legend who killed and salted the children before they were revived by Saint Nicolas.

What does his name mean? Unknown.

Where can I find him? Pays Basque

Is he naughty or nice? Nice

This legendary coal merchant passes throught the towns and villages of Pays Basque just before Christmas to distribute logs to the poor so that no-one need go cold at Christmas. Some of the French towns that celebrate his arrival include Ciboure, Hendaye, Bayonne and Saint-Jean de Luz, where he rides door-to-door on a local breed of pony, a Pottok, and gives out sweets to children.