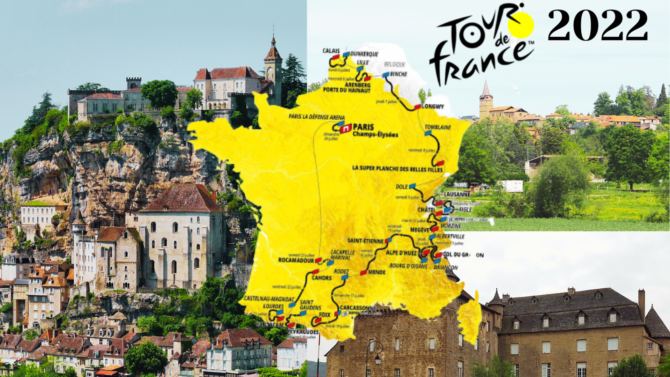 The official route of the 109th edition of the Tour de France has been unveiled by the director of the event Christian Prudhomme at the Palais des Congrès in Paris. In France, the race will visit 8 regions and 29 departments. From the Grand Départ in Copenhagen, Denmark on July 1 2022, to the finishing line on the Avenue des Champs-Elysées, the cyclists will be passing through many communes, villages and towns. Here are the three new stage hosts announced for the 2022 Tour.

While the peloton has passed through this south-western commune many a time leading up to this 109th edition, 2022 will be the first time a stage starts here. The cyclists will start in front of the church and descend to join the road to Auch in the department of Gers.

The population of this commune in the Hautes-Pyrénées department is estimated to be around 800, and property prices here average €1,172/m2, lower than the departmental average of €1,574/m2. Castelnau-Magnoac was a beneficiary of the 2020 Petites villes de demain (small towns of tomorrow) programme, which aims to improve a location’s future and its prospects in an environmentally friendly way.

The final 40km individual time trial will see two new stage hosts in 2022, the start being held at Lacapelle-Marival, another commune in south-western France. This stage will see the cyclists cross through the Regional Nature Park of the Quercy Limestone Plateaus and pass near the Padirac caves towards the famous town of Rocamadour.

In the old Quercy department of Lot, this village was formerly one of Les Plus Beaux Villages de France. Average property prices in the commune are €1,154/m2, compared to Lot’s €1,375/m2 average.

The final stop before the cyclists transfer to Paris for the finishing stage, this town is an important pilgrimage site, and is famed for its position perched atop a limestone cliff that overlooks the Alzou canyon. It is listed as a UNESCO World Heritage and attracts thousands of tourists every year, as well as being a main stop on the Saint Jacques de Compostelle pilgrimage route, and listed as a Plus Beau Village De France.

Rocamadour’s €1,571/m2 average is higher than Lot’s €1,375/m2 average property price, partly due to its popularity with tourists and status as a Plus Beau Village.

More in Cycling in France

Previous Article 3 of the best places to see Provence’s lavender fields
Next Article 48 hours in Paris: Unmissable new things to see and do on a short break in the city