3 day-trips by train from Paris 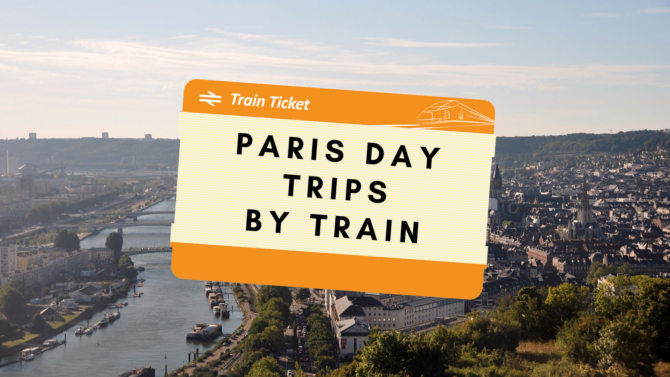 With the city of light as your base and an efficient transport system that can take you across the country, you can enjoy the best of both worlds. That’s why we’ve highlighted three of our favourite day trips from Paris that can be reached by train:

Just 90 minutes from Paris by train, the Normandy capital’s main highlights could all be connected by the letter C: cathedral, churches, clock, culinary history. Start off at the cathedral, made famous by Claude Monet’s series of paintings. The Impressionist painter depicted the city’s Cathédrale Notre-Dame more than 30 times. Opened in 1876, the imposing Gothic building dominates the skyline and is considered to be the tallest cathedral in France.

The French novelist Victor Hugo famously described Rouen as “the city of a hundred spires” and you’ll find a number of equally impressive churches throughout the historic centre, including Saint-Ouen with its stunning stained-glass windows.

Take a stroll along the pedestrianised Rue du Gros- Horloge that runs between the cathedral and Place du Vieux- Marché and look up at the Renaissance arch spanning the street to see Le Gros Horloge. This beautifully decorated astronomical clock dates to the 14th century and is one of the oldest working clocks in Europe.

The lively Place du Vieux- Marché with its colourful half-timbered building makes a great lunch spot, and where better to eat than the restaurant that is said to have inspired Julia Child to devote her life to promoting French cooking? La Couronne was founded in 1345 and is France’s oldest inn. Rouen was recently named a Unesco Creative City in the field of gastronomy.

Originally a medieval hunting lodge and predating Versailles by five centuries, the Château de Fontainebleau is the only château which was lived in by every French monarch for almost eight centuries, with no fewer than 34 sovereigns making themselves at home in its oputem rooms – all 1,500 of them. The château holds close to 30,000 works of art from the 16th to 19th centuries, many of which are on display inside. The town of Fontainebleau grew around the château and is situated within the Föret de Fontainebleau, one of the largest forests in France, covering 25,000 hectares. The fastest train journey time from Paris Gare de Lyon is 39 minutes.

In just over two hours you could be swapping the city for the seaside. So popular was the seaside resort of Le Touquet in Pas-de-Calais that it became known as Le Touquet Paris- Plage, or ‘Paris by the sea’. In its heyday it attracted wealthy Parisians who were keen to swap the hustle and bustle of the French capital for a breath of sea air on the Côte d’Opale, and it became the holiday destination of choice among the rich and famous. Work up an appetite before heading to two local institutions for food: Perard, one of the oldest and most popular restaurants in Le Touquet, for its famous soup, and Au Chat Bleu, where you can choose from 36 different varieties of chocolate treats.

Previous Article Calvados: The story behind the cider
Next Article Living in a historic French home