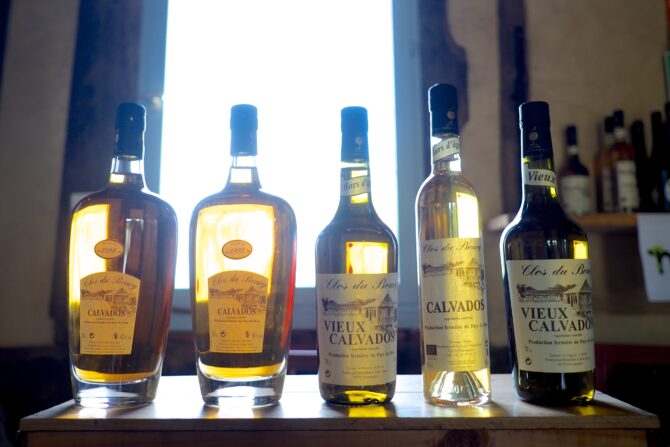 An apple brandy with Appellation d’Origine Contrôlée (AOC) status, Calvados is a drink that can only legally be produced in Normandy. Approximately six million bottles are sold each year with a selection of some of the 200 apple varieties cultivated in the region.

Calvados, unlike cognac, begins as a cider, with the fruit pressed and fermented before it is then distilled into an eau de vie and aged in oak for a minimum period of two years.

In the 18th century Louis XIV, influenced by one of his ministers who was from Cognac, passed a law that forbade the exportation of calvados outside Normandy. Investments in, and the production of, calvados thus stagnated while cognac exports rocketed.

However, in the following century phylloxera ripped through many European vineyards and destroyed France’s cognac supply, and as a result of this, calvados gained popularity, the apple orchards being unaffected by the pest.

The drink is traditionally taken after a meal, but it makes both a good apéritif and digéstif. Calvados should ideally be served in a tulip shaped glass and drunk neat without ice to ensure maximum flavour.

Le trou normand (a Norman hole) is a pause between dishes during which a glass of calvados is enjoyed, with the belief that it restores the appetite — creating a ‘hole’ in one’s stomach.

Running alongside the annual apple harvest in October, National Calvados Week is usually celebrated in October.

Want to know more about French food and drink?

Taste of France celebrates all things French food and drink, with a selection of recipes, tours, news and reviews, and the mouth-watering Taste of France magazine is filled with classic French recipes that you can make at home, and from Michelin magicians to regional royalty we’ve hunted out the most talented chefs to reveal their recipes. Order a copy now for a whirlwind tour of the best gastronomic destinations.