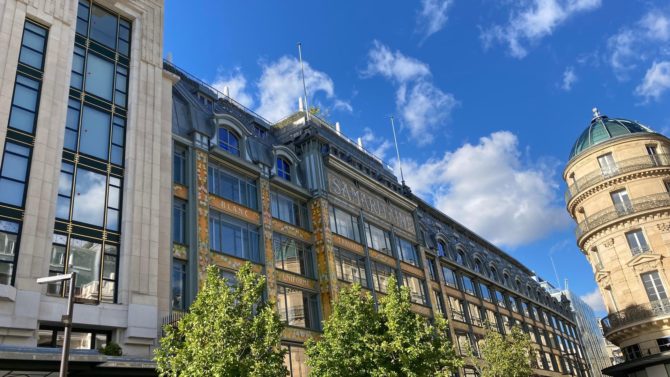 1. La Samaritaine was founded by merchant Ernest Cognac and his wife Marie-Louise Jay in 1870.
2. The store reached the peak of its commercial success in the 1960s but in the 1970s its fortunes began to fade. In 2001, La Samaritaine’s  four buildings and an adjoining apartment block were sold to the luxury group LMVH, which counts Louis Vuitton, Veuve Cliquot and Christian Dior among its 75 prestigious brands.
3. Concerns over the safety of the building resulted in the closure of La Samaritaine in 2005, and the hoped-for reopening date of 2013 came and went as LMVH faced numerous legal challenges over its grand plans for a lavish makeover.
4. La Samaritaine finally reopened on 23 June 2021, 16 years after the doors closed in 2005, following renovation work costing €750 million.

5. Commissioned by LMVH, prize-winning Japanese architectural firm SANAA was tasked with the transformation, which involved restoring many of the original Art Nouveau and Art Deco details while also bringing the building into the 21st century.
6. 16,000 gold leaves were produced for the restoration of the central staircase railings.

7. The vast site covers more than 70,000m2 in total and also includes the new 5-star Cheval Blanc palace hotel with 72 rooms and suites, four restaurants and a Dior Spa, as well as offices, a children’s nursery and social housing in the now-renovated apartment block.
8. The instantly recognisable ochre-yellow facade bearing the Samaritaine name was restored to its former glory. The ultra-modern undulating glass wall that was created on the other side of the building has been the subject of much controversy, with critics saying it resembles a shower curtain. To make the undulating facade facing Rue de Rivoli, 343 screen-printed glass panels were crafted.
9. The store’s original slogan was On trouve tout à La Samaritaine (One can find everything at La Samaritaine), which helped the store find its way into the hearts of 19th-century Parisian shoppers.
10. Parisians affectionately refer to the store as ‘La Samar’.

11. Bespoke pâtisseries have been designed to match the signature motifs featured on La Samaritaine’s staircase railings and plush carpets.
12. Voyage Samaritaine is the store’s largest restaurant and opened with a menu designed by two-Michelin-star chef Matthieu Viannay, although the idea is to have a new chef in residence every season.
13. Renowned French baker Eric Kayser, famous for his Maison Kayser bakery, is in charge of bread and pastries at Ernest, which has been described as a “new restaurant concept that mixes brasserie and boulangerie.” Meanwhile, for its outlet in the store, caviar house Prunier has created the concept of ‘street caviar’, intended to transform caviar into something that is accessible for everyone.

Previous Article A spotlight on Pau in the Pyrénées-Atlantiques: From gastronomy and galloping horses to Good King Henry
Next Article Freelance in France: the ‘portage salarial’ umbrella scheme