WIN! A copy of Last Year in Marienbad on DVD 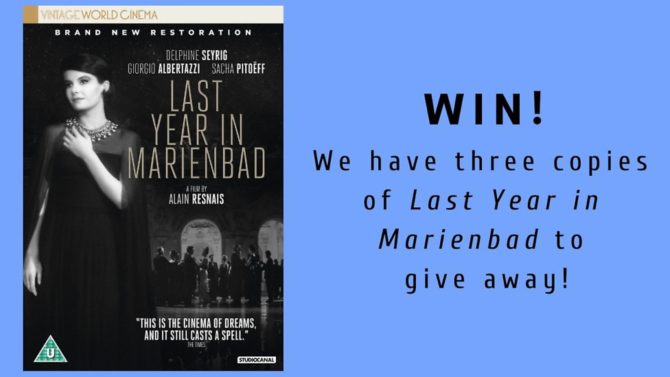 We’ve got three copies of the newly-restored French classic film to give away.

A stunning new restoration of one of the most enigmatic and distinctive films ever made, Last Year in Marienbad, has arrived in astonishing high definition on Blu-ray, DVD and Digital Download on 17 September 2018. The astounding collaboration between acclaimed French director Alain Resnais (Night and Fog, Hiroshima Mon Amour) and leading French novelist Alain Robbe-Grillet is a key moment in the French New Wave.

To celebrate the release of the film, we’re giving away 3 copies on DVD.

In a baroque spa hotel, an unnamed sophisticate (Giorgio Albertazzi) attempts to persuade a similarly unnamed married woman (Delphine Seyrig) that they have not only previously met, but that they were also romantically involved and had planned to elope together. The woman recalls no such encounter and so begins a sensual and philosophical examination of the uncertainty of truth.

Delphine Seyrig’s costumes were designed by Coco Chanel, who have kindly supported the new restoration and are hosting an event following the Venice Festival screening.

Strikingly composed and beautifully shot in Cinemascope by Sacha Vierny, Last Year in Marienbad hypnotically merges chronology to radically blur the boundaries of reality and fantasy. A seductive and utterly fascinating cinematic puzzle.

LAST NIGHT IN MARIENBAD IS OUT NOW ON BLU-RAY, DVD AND DIGITAL DOWNLOAD!