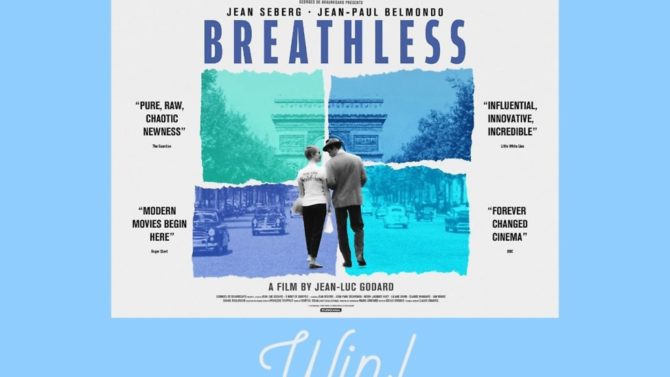 The classic French film is celebrating its 60th anniversary

2020 marks the 60th anniversary original release of Jean-Luc Godard’s BREATHLESS (À Bout De Souffle), the epitome of cinematic cool which inspired a generation of moviemakers, featuring iconic performances from Jean-Paul Belmondo and Jean Seberg as the central, most delightful and insolent couple in cinema history – young, effortlessly stylish, and in love in Paris.

To celebrate the anniversary and the release of a newly restored version of this timeless classic we are giving away the film on Blu-ray or DVD, courtesy of Studiocanal’s Vintage World Cinema collection.

BREATHLESS will be released on Blu-ray, DVD, Digital, and as a 4K UHD Limited Collector’s Edition (with 12” vinyl original soundtrack by Martial Solal, 40-page booklet, poster and art cards – exclusive to Amazon.co.uk) on 9th November 2020.