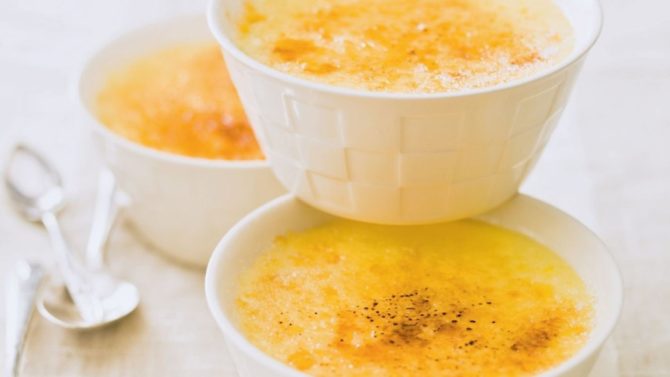 Founded in Paris in 1895, Le Cordon Bleu is the world’s leading network of institutes for culinary arts. Chef instructors are winners of major national and international competitions, eager to share their passion and pass on their knowledge to students from around the world.

This white chocolate crème brûlée should be prepared the day before serving.

Place the crème fraîche in a saucepan. Using the point of a knife, scrape the seeds from the vanilla pod into the cream; add the pod and heat until simmering. Remove from the heat and set aside to infuse for one hour.

Chop the white chocolate and melt over a bain-marie; remove from the heat, stirring until smooth. Add the egg yolks and mix well to combine; stir in the vanilla-flavoured cream.

Pour the mixture into a clean saucepan. Stirring constantly with a wooden spoon, cook over low heat until the cream is thickened and coats the back of the spoon. (Do not allow to boil!)

When ready to serve, preheat the oven grill to its maximum temperature. Sprinkle the creams evenly with the sugar and place under the grill until the sugar melts and turns golden. Serve immediately.