French life is sweet: From San Francisco to baking sensation in Paris 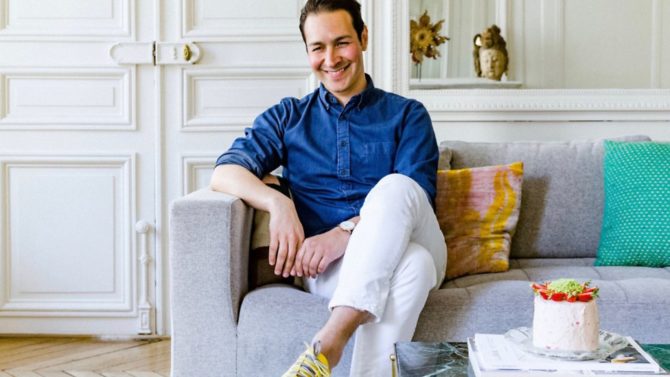 When American baking sensation Frank Barron relocated to Paris from San Francisco with his partner he thought it would just be for a year, but the city got under their skin. Six years later, the pair are still in the French capital and they couldn’t be happier

“Paris is always a good idea,” said Audrey Hepburn in the 1954 film Sabrina. And she’s not wrong there. With its unique blend of beautiful architecture, world-class museums and top-notch restaurants, it is easy to see why so many people fall for its charms. To live in Paris is a rite of passage for many, and while people initially move to the city for six months or a year, many end up staying much longer. This was the case for Cake Boy Paris, aka Frank Barron, the 40-year-old American baker extraordinaire who swapped San Francisco for the French capital in 2012. “I came to Paris for my partner’s work and we only thought we’d be here for a year or so, but then we fell in love with the city,” he says with a big smile on his face.

Six years later, he feels very much at home in Paris, and has made a name for himself on social media as a cake maker, with particular success on Instagram. “It’s given me so many opportunities,” he says. “I opened the account six years ago just for fun really and things just took off.” Today, Frank has in excess of 25,000 followers, a healthy number that he attributes to being in the right place at the right time. When it comes to identifying why he has been so successful on Instagram, he remains decidedly modest, highlighting the fact that there are lots of people in the US who are into baking and upload pictures of their cakes onto a social platform. Meanwhile, American-style cake-making is still “a novelty for the Parisians.” What’s more, his loyal social media following has enabled him to share and develop his love of baking with leading brands. “Two years ago, I was approached by Galeries Lafayette to work on a Thanksgiving social media campaign,” he says. This required him to produce one American-style cake and a typical French pâtisserie with an American twist, which Frank described as “a magical experience”.

Why I love living in Paris

A PICTURE SPEAKS A THOUSAND WORDS

With all the beautiful sweet creations that appear on his Instagram page, you would assume that he has been to one of the world’s finest pastry schools. But you’d be wrong. “I’ve had no professional training whatsoever,” he says. “I learned the basics when I was growing up with my mum and my grandmother. We would make typically American cakes with thick, creamy icing. And then I started baking again when I moved to Paris just as a hobby and I watched video tutorials to improve my technique.”

During his first year in the French capital, Frank visited countless bakeries sampling different French pâtisseries – think creamy Paris-Brest, delicate milles-feuilles and sticky Kouign-Amann. He quickly realised that he missed American-style cakes and there were very few places (if any at all) that sold them in the city. “That’s when I started baking cakes at home in our Marais apartment,” he says. “I made the cakes that I wanted and I experimented with different ingredients and flavours, using my friends in the city as guinea pigs to see what worked and what didn’t work.”

Impressed with the quality of his work, Frank’s friends soon asked him to bake cakes for their birthdays – which he describes as his “favourite thing” – and it wasn’t long before his creations started popping up in select cafés in the city’s 3rd and 11th arrondissements.

Frank’s success as an American-style baker in Paris has also led him to start up his own decorating workshops. “This is the fun part of baking,” he says. The sessions have taken place once a month over an afternoon, with each participant receiving three mini cakes to hand-decorate. Each session ends with participants sampling their cakes in Frank’s Marais apartment, and they can even take their creations home with them. “What I’ve loved about these sessions is that they have made me more confident as a baker,” he adds.

See how much Paris has changed since 1900

FOR THE LOVE OF PARIS

Whatever path he decides to take with his cake-making skills, Paris is still home for Frank – and it looks like it will continue to be the source of many Instagram posts for some time to come. “Paris is like an outdoor museum,” he says. “There is beautiful architecture whichever way you turn, and the city is just so walkable.”

What better way to see and experience Paris than to explore the city on foot? “I love wandering around the city’s streets and green spaces. I love to take my dog Parker to Jardin de Luxembourg – there is just something about this place that I really like.”

One of the French capital’s many advantages for Frank is its café culture. “I love being able to laze around on a terrasse with a café crème, watching the world go by.”

And some of his favourite cafés are within touching distance of his apartment. “There are so many great cafés in the Marais where I live and sometimes I don’t leave my arrondissement for days. Paris is an amazing city and I know that I’m so lucky to be able to call it home.”

Mamie Gâteaux for a casual goûter. Be sure to try a slice of their chestnut cake with the Sakura tea

Bontemps Pâtisserie for tea time in their secret garden in the Marais. Don’t forget to sample their heavenly sablés

Four Seasons George V to up the glamour and indulge in pastry chef Maxime Frédéric’s beautiful creations. His fleur vacherin is especially brilliant.