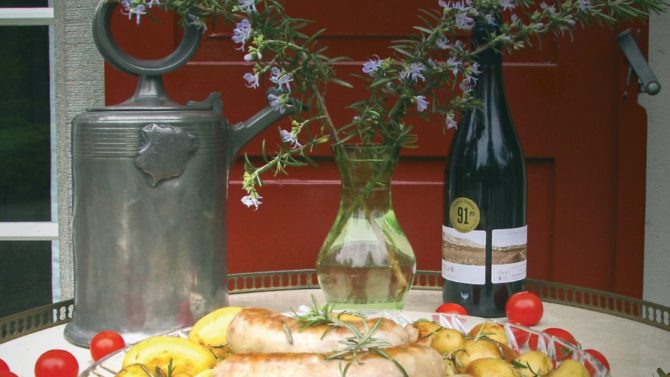 Through a TV series directed by her husband, Regina Von Planta found herself at home in Ardèche, south-east France and has created a cookbook of its speciality dishes

When did you decide to move to France?

In 2002, because my husband filmed the very successful Channel 4 series A Place in France. It was a great opportunity for our daughters to learn French at the local primary school.

What were you doing beforehand?

I was working in the fund management industry in London.

What attracted you to Ardèche?

The wild and unspoiled landscape and it was fun to meet all sorts of quirky French people.

How did you find your farm and what was your first impression of it?

We spent a day with a local estate agent without great conviction. The first property we were shown was just above the tiny town of Largentière. A cherry tree was in full blossom in front of one of the houses, the children lost themselves playing on the terraces and the view was stunning.

We spent the day visiting more houses and at the end told the estate agent that we were charmed by the first one. We were relieved to hear that it was practically sold. As an afterthought we said that if anything changed, they should let us know. And that is what happened.

Was it difficult to grow plants and produce at first?

I made many mistakes with my choice of plants and gardeners and with watering. However, from the beginning, I wanted to create a garden rather then revive the old farm. However, we also wanted to keep the historic landscape and set out to restore many stonewalls and terraces, to prune the old fruit trees and to add to the olive trees.

What inspired you to write Chateau, Jardin, Cuisine?

Through my work in the garden and with the soil and the exchanges of our quinces, nuts, cherries, olives against jams, purées, liqueurs, patés, I met some great cooks. The book is for them.

What makes the food in this area different to other regions of France?

Firstly, Ardèche has some interesting specialities, such as goat’s cheeses, chestnuts, sausages, beef and then people had to be creative in order to cook good food with produce from their poor soil, their difficult terrain and the remoteness of their valleys.

Do you have a favourite recipe?

Was the local community keen to share their secrets of Ardèche cuisine with you?

Some would not share at all; some were keen because they did not want their recipes to be forgotten; and some were truly supportive.

Where is the market you like to shop at most?

Largentière because I know everyone and Rosières, because the choice is more interesting.

Where is your favourite restaurant in Ardèche?

Have you finished renovating your property and creating a garden?

We built a small and comfortable annex to our house, but the garden will never be finished.

What do you love most about living in France?

The climate, the food, the rivers, the old villages and getting involved in gardening and cooking, where I have fun.