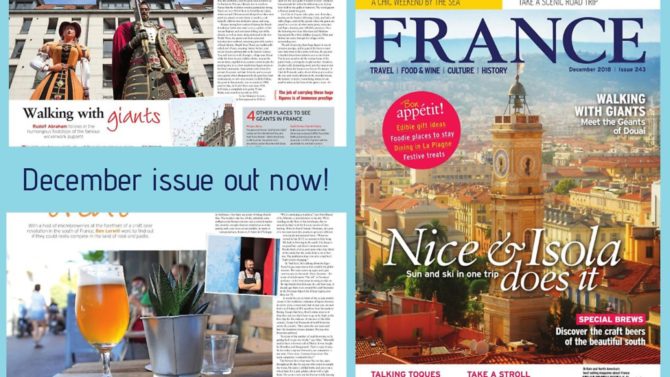 One of the best bits about working on FRANCE Magazine is learning something new about our favourite country every single day. Here we share with you some of the weird and wonderful things we discovered about the Hexagone while putting together your December issue…

Rosé had better watch out; craft beer is the up-and-coming drink in the south of France. We were astonished to find out that a decade ago there were only around five craft breweries in the Provence-Alpes-Côte-d’Azur region – now there are 70!

Follow writer Ben Lerwill on his microbrewery odyssey on page 38.

If you struggle to stand upright on skis but still love the thought of speeding down a mountain at 60kmh like staff writer Helen, you’d love the Luge Monty Express in the Alpine ski resort of Montgenèvre. The ride runs for a whopping 1,400 metres, making it the longest in France.

Discover more about Montgenère in our ski resort round-up on page 20.

3) You can buy a Camembert made out of chocolate

Cheese and chocolate lovers unite: this British chocolatier has made all your gastronomic dreams come true. This white chocolate creation boasts an oozing centre and even comes with chocolate bread to mop it up with. Here’s hoping there’s one in our stockings this Christmas…

Be inspired by our foodie Christmas gift guide on page 68.

If you visit the village of Licques, 24km south of Calais, on 15-16 December, you’ll encounter a procession of turkeys and their proud farmers. The celebrations include a Christmas market and a street show with mechanical turkeys – something that we’re very intrigued about!

Find out more about Licques’s terrific turkeys on page 17. [Note – the date of 8-9 December published in the magazine is incorrect]

We’d never considered a sun-and-ski holiday before, but it’s certainly possible in the south of France. The ski resort of Isola 2000 is a two-hour bus journey from Nice, and at €1.50 for the ride, it’s more than worth it.

Let James Rampton show you how to get the best of both worlds on page 30.

6) There’s a divine French version of shepherd’s pie, but with confit duck

Is there any better comfort food than a shepherd’s pie? We’ve all vowed to try out this luscious-looking duck confit pie topped with garlicky potatoes, which looks like the perfect winter supper dish.

Celebrity chef Michel Roux has the recipe for pie success on page 74.

We don’t want to give too much away but during the Occupation, the mayor of Cassel managed to hide the town’s géants from the Nazis, who would decapitate all the giants they found as they were such a strong symbol of local identity.

Let Rudolf Abraham tell you all about these towering wickerwork puppets on page 52.

Le Touquet has long been the seaside escape of choice for the glitterati. Have dinner at fish restaurant Pérard, where Lord Sugar is a huge fan of the fish soup and orders it every time he visits.

Eddi Fiegel shares her tips for a long weekend in Le Touquet on page 44.

So what are you waiting for? The November 2018 issue of FRANCE Magazine is now on sale – order your copy now.