Why Montpellier in France is a wonderful place to live 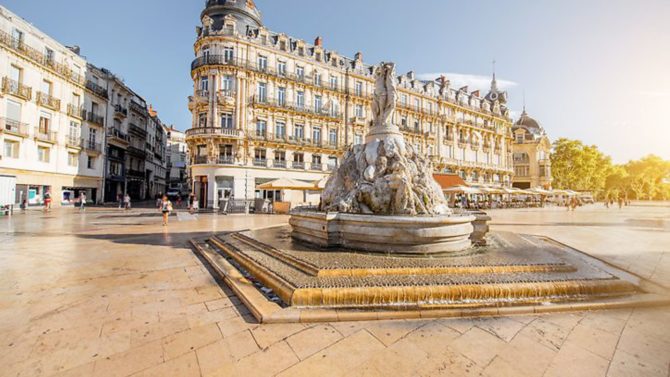 Journalist Jenny Eagle left London for a new life in Montpellier, Occitanie and has fallen for its stunning architecture, buzzing vibe and beautiful beaches

I was working as a freelance journalist in London. Doing night shifts on the Daily Mail, uploading content, photos and videos for subscribers to the Daily Mail newspaper on iOS and Android and working as a sub editor on the Mail on Sunday Live magazine.

I saw a job advertised for William Reed Media on a journalist jobs website and decided to go for it.

What attracted you to Montpellier?

Prior to Montpellier I lived and worked in Australia, Argentina and Dubai. I have a love for travel but wanted to be closer to home in the UK, so this was the next best thing. I was so happy to get the job. Who couldn’t resist a move to the south of France?

Did you know this part of France well already?

I was familiar with the Côte d’Azur but never this part of France. I feel like I hit the jackpot because Montpellier is a hidden gem. The architecture is beautiful, it’s not overrun with tourists, it has a buzzing student vibe with lots of bars and restaurants, the wine is excellent and there are plenty of beautiful beaches to choose from.

Did you find it easy to find a suitable property?

It was hard at first given the language barrier and I mainly found rentals through word-of-mouth.

I decided to buy a one-bed flat 10 minutes from the town centre about three years ago because I basically pay the same each month as I did when I was renting and it has a huge south-facing terrace.

How long have you lived there?

Six years and this year I’m starting the process for nationality. Brexit is a sore topic for many Brits living here at the moment.

What does your job entail?

I write articles and produce news videos on the food and beverage industry worldwide.

There’s a big push towards sustainability right now, following the global plastics debate and I cover trends such as 3D printing, digitalisation, robots and Industry 4.0; ie the ‘Factories of the Future’.

What do you most enjoy about living in Montpellier?

The food and wine, the blue skies and sunshine, the beach bars (paillotes) and the fact it’s three hours by TGV from Barcelona or Paris.

You’ll find me at the beach every weekend during summer either at La Paillote Bambou in La Grande-Motte; Carré Mer in Villeneuve-lès-Maguelone or La Ola in Sète.

I love going to the Roman aqueduct near La Promenade du Peyrou where there is a market in Les Arceaux every Saturday under the archways. The location is stunning and there are dozens of stalls to browse. There is also a chic venue, which opened a couple of years ago, called Marché du Lez, along Rives du Lez (a coastal river) which has a food truck village with a Halles Gourmandes food hall coming soon and it just reopened Les Halles Laissac, a covered market in town.

My top three venues are; La Réserve Rimbaud, on the river, which has one Michelin star run by chef Charles Fontes. The lunchtime menu is a steal at €40 (Entrée-Plat-Dessert); Le Parfum cocktail and Dimsum bar in Beaux-Arts and Bonobo in the town centre, for brunch and coffee (the American-style pancakes are to die for).

Is there any aspect of living in Montpellier that surprised you?

Which other areas of France do you enjoy travelling to or visit regularly?

What advice would you give to expats thinking of moving to Montpellier?

Brush up on your French as much as possible – it’s the only way you’re going to integrate into society. Research which area you want to live in. The town is growing and each quartier has something different to offer. Throw yourself into an outdoor activity, the natural beauty will astound you.

And, be prepared for lots of admin and taxes.

Previous Article 11 things you might not know about Le Cordon Bleu cookery school
Next Article Can you take GCSEs in France?