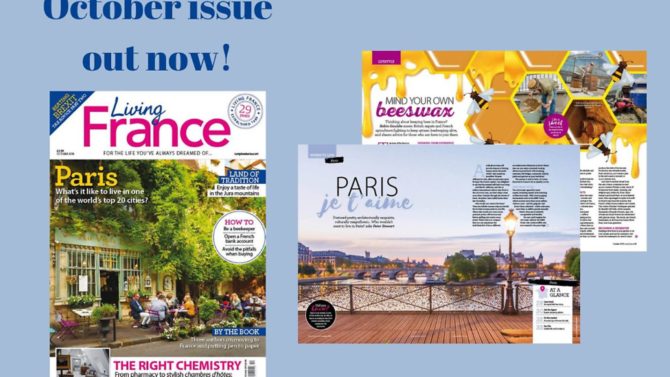 At Living France we aim to bring you useful insight into life in France to help and inspire you to live the life you have always dreamed of. Here are nine things we learned about life in France in our October issue:

Who wouldn’t want to live in Paris? Asks Peter Stewart as he takes a look at the city of light and love, its food, architecture and culture.

2. The double tax treaty in place between the UK and France will be unaffected by Brexit

In the second of his two-part article, Kehinde Dauda of Greenwich Taxation continues to examine the tax implications of moving to France before the UK leaves the EU.

3. The town of Espelette has a pepper blessing every year

The annual Fête du Piment on 27–28 October has a whole programme of pepper-related activities and celebrations. We round up some of the key events happening around France in October.

4. You don’t have to live in the French countryside to keep bees

There are around 300 apiaries in Paris. Robin Gauldie meets a French apiculteur with a hive atop the Musée d’Orsay and some British expats fighting to keep artisan beekeeping alive in other areas in France.

We love this phrase which literally translates as ‘melt like snow in the sun’. October’s language pages look at more expressions relating to the sun. Plus we have language news, recommendations and puzzles.

Paola Westbeek discovers the unspoilt peaceful landscapes of Jura, great for those who want to get closer to nature and live a traditional French lifestyle of days gone by.

7. A move to France can provide great inspiration for a book

We meet three authors who have found success with books about their lives in France. Stephen Clarke knew he had something different with his book A Year in the Merde. Tommy Barnes’ A Beer in the Loire started off as a blog and Karen Luff’s Hosting Hapless Helpers began as emails to her friends.

8. It is not possible to stop a cheque in France, except in cases of theft or fraud

9. Venison can make a great alternative to beef in a bourguignon

This month’s recipe is a venison bourguignon with dark chocolate and star anise.

If you want to read and learn more about life in France you can buy the October 2018 issue of Living France here.

Or, you can take out our great subscription offer and get the magazine delivered to your door every month!