Where to watch France’s biggest birds 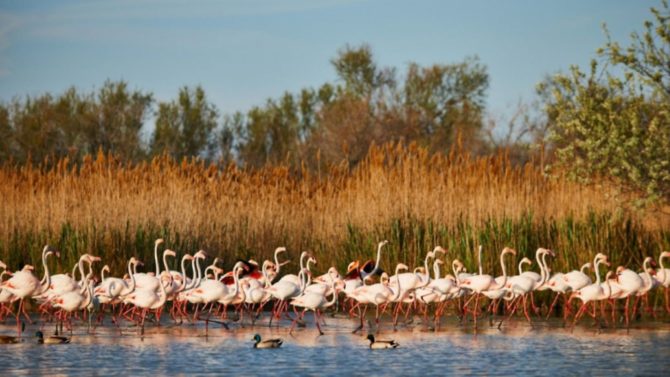 France has some iconic avian species. From the shores of the Mediterranean to the rooftops of Alsace Robin Gauldie discovers the best places to see these big birds.

At the Réserve Africaine de Sigean, near Perpignan, France’s only flock of free-flying pelicans breed and feed on around 100kg of fish a day, distributed by park workers. A non-indigenous species (they are native to Africa), the idea is to keep them from roaming and spreading into areas where they could be considered invasive. They make an arresting sight gathered near the Oeil de Cu lagoon.

Pelicans are not the only big birds that make their home at Sigean. While the pelicans feed, storks wheel overhead, red legs dangling. Others poise on untidy nests built on poles, beaks open to help them cool off in the heat of a Roussillon summer. Wading on stilt-like legs in the shallows of the lagoon, garrulous flamingoes keep up a constant conversation. There are more than 1,000 wild flamingoes at Sigean, along with around 200 of their more brightly coloured Chilean cousins.

To see the breed in wilder surroundings, head to the wetlands of the Camargue regional park, and the Étang de Fangassier, home of France’s only flamingo breeding colony. Here, 10,000-15,000 pink-plumaged pairs raise their young on and around a lagoon island that until 2008 was used for sea-salt production. Shrimp and the other tiny creatures on which flamingoes feed thrive in the lagoon, and during the breeding season it is mobbed with birds. Like their cousins at Sigean, they keep up a croaking clamour that can be heard some distance away.

As an easier alternative to the Camargue, try visiting the Parc Ornithologique Pont de Gau, near Saintes-Maries-de-la-Mer. Six kilometres of easily accessible walkways connect viewing platforms that overlook 60 hectares of reedbeds and lagoons. Flamingoes are the leggy stars of the show here, too, but also look out for egrets, herons, storks and ibis.

If the flamingo is the icon of the Camargue, the white stork is equally emblematic of Alsace. France’s white storks have become a conservation success story, making a comeback from the brink of extinction. Less than 50 years ago, the French stork population was down to just nine breeding pairs. Electrocution of birds that perched on or hit electricity cables was one cause (ironically, electricity pylons are a favoured nest site), while hunting, habitat loss and pollution all played a part. Now there are more than 3,000 pairs, and nowhere are they more loved than in their ancestral homeland, where the white stork’s recovery has been aided by providing convenient nesting sites in town and country. You can see their big, messy nests on roofs and chimneys in Alsace’s picturesque wine villages and even in Strasbourg, the region’s biggest city, where storks have taken up residence in the Parc de l’Orangerie.

Around 200 pairs nest at the stork reintroduction centre at NaturOparC, in Hunawihr, where dozens soar above the vineyards in spring and summer. In autumn, most will set off for their wintering grounds in sub-Saharan Africa, where the young will spend the next three years, returning to France to mate and breed only when they are mature. In spring and autumn, Alsace also sees a scattering of black storks on their way between Africa and their breeding grounds in eastern Europe.

Just as the storks set off for the Sahel, the skies over the former Champagne-Ardenne region are darkened by huge flocks of common Eurasian cranes as they congregate on Lac du Der, an artificial, 4,800-hectare lake in the Marne Valley. They, too, are on their way south from a summer in northern Europe. As many as 50,000 birds may land in just one day in the nature reserve. The best place to see them is La Ferme aux Grues, where conservationists from the Ligue pour la Protection des Oiseaux (LPO) spread organically grown grain, beans and peas provided by local farmers to ensure the cranes are well fed before continuing their long journey – and to keep them coming back. They are there en masse for only a few weeks, so to see the migration at its most impressive you should plan to visit between mid-February and early to mid-March.

More vast flocks fill the skies above Sept-Îles, the seven craggy islets off Côtes-d’Armor in northern Brittany. Île Rouzic is France’s only gannetry, and the southernmost nesting place of the northern gannet. From spring until early autumn its cliffs gleam white with thousands of nesting birds, each just outside pecking reach of the next. In peak breeding season, gannets plummet into the Atlantic all around the boats that take sightseers out to Rouzic from the port of Perros-Guirec, throwing up spouts of water as they hit the sea.

In France, the Egyptian vulture clings on in the Pyrénées, where fewer than 60 pairs breed. Elsewhere, the LPO is trying to reverse the decline of vulture populations in south-east France by reintroducing them to selected locations such as the Rocher du Caire in Drôme. Here you might also see two other species. LPO re-introduced griffon vultures in 1991, and the black vulture, the largest of France’s four species, was introduced in 2002.

More vultures soar above the Gorges de la Jonte, dividing Lozère and Aveyron, where an observation terrace looks out over the steep limestone crags of the Grandes Causses regional park. Here, conservationists working with the Life Gypconnect project provide a refuge for France’s rarest and most impressive vultures as they migrate between their last enclaves among the highest slopes of the Pyrénées and the Alps. A century ago, the bearded vulture was virtually extinct in France. Despite a three-decade programme of conservation, it is still at risk. Now, by providing roosting sites and feeding stations in habitats such as the Grandes Causses, Gypconnect hopes to create a flight corridor across southern France that will connect the vulture populations and increase genetic diversity.

The four vulture species are the most critically endangered of France’s big birds but the success of programmes in restoring and conserving other giants of the sky such as storks, cranes and flamingoes shows that they can be brought back from the brink. Hopefully, vultures, too, will become a more common sight over French valleys and hillsides. Until then, keep watching the skies.