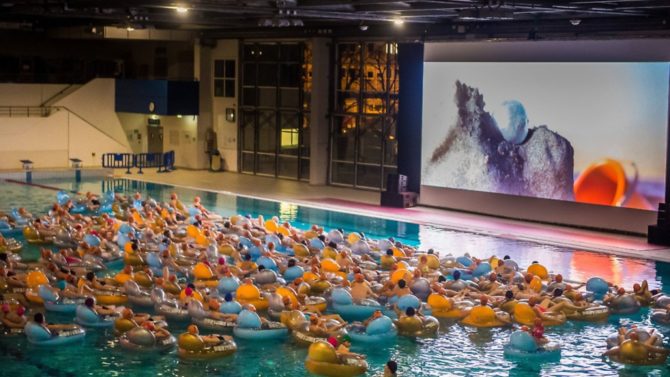 Summer may seem like an age away but there’s still plenty to be entertained by in France in February. From floral parades to film festivals, find out what you can get involved in this month…

Now in its third year, Normannia is a relative newbie to the bulging French medieval fair calendar but it is fast becoming a must-visit; last year saw 10,000 visitors gather in Rouen’s Parc des Expositions and even more are expected in 2019. At the market you can buy everything from traditional armour to medieval cheese! Performances include tales from a Norman storyteller, Gweltaz Le File, and music from the pirate-inspired band Barbar’o’Rhum.

The flowers are the star attraction in the appropriately-named Provençal village of Bormes-les-Mimosas. On 24 February, flower-adorned floats take over the winding streets for a stunning afternoon parade that has taken place since 1920 to herald the arrival of spring. As well as mimosas, the vehicles are bedecked with daisies, marigolds and carnations for the ultimate display of nature’s beautiful colours.

This festival celebrates the release of the new vintage of this special type of white wine, produced in Jura and similar to sherry. Every year the festival takes place in a different village; this time the host is Ruffey-sur-Seille. Visit the winegrowers’ cellars to learn how this special wine is produced, then enjoy a glass of the good stuff with an andouillette from one of the fabulous food stands.

Look beyond the Eiffel Tower, the Champs-Élysées and the Louvre to discover a different side of the city in this three-day cultural exploration. More than 100 unusual places normally closed to the public open their doors to allow visitors to experience the Paris that the tourist guidebooks and coach trips don’t advertise. The number of places is limited, however, so make sure to get your tickets early when reservations open in January.

A lot may have changed in the auto industry since this classic car show first set up shop in 1976, but Rétromobile remains one of the must-visit events for enthusiasts and professionals worldwide. The event marks the beginning of the international car show season, making it one of the highlights of the industry calendar. Top picks previous events included an exhibition from the National Motor Museum in Beaulieu and a celebration of Renault’s 20th birthday.

For a unique Valentine’s Day experience, forget Paris and head east to the Alsatian capital to be seduced by its bumper programme of romantic (and sometimes quirky) events taking place across the city. Previous highlights include tours following in the footsteps of famous lovers, a temporary bar on the ‘Bridge of Sighs’ and a retro slow dance at the Café des Amours.

Lemon lovers can’t miss this one! This festival, celebrating Menton’s success as a citrus fruit producer, attracts more than 250,000 visitors every year who come to marvel at the incredible sculptures made using the fruit. This year’s theme is Des Mondes Fantastiques so expect to see creations that are out of this world; in past years the sculptures have included the Moulin Rouge and the Taj Mahal.

Making oft-intimidating classical music accessible to everyone is at the heart of La Folle Journée music festival in Nantes. The city’s convention centre will be alive with the sound of Mozart, Brahms and their contemporaries as it hosts around 250 concerts. Each performance lasts under an hour and tickets are affordably priced, so it’s the perfect entry into the genre for those wary of attention a full-length show.

The largest international film festival dedicated to short films began as an event organised by the local university’s film society. There are now over 160,000 visitors and 3,500 professionals who descend on the city to watch around 450 short films. A unique attraction is the Ciné Piscine, where the audience takes to the water in inflatable chairs for a viewing experience like no other.

8 of the most romantic places in France