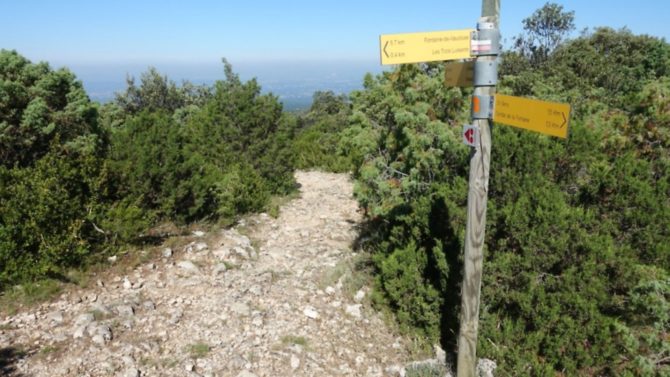 Lying on a hammock under the shade of an apricot tree, I felt no desire to move very far. I was gearing myself up for a self-guided walk through Provence – specifically around the Monts de Vaucluse and the northern Luberon. But on this languid afternoon, I was happy to indulge in some lotus-eating at Le Mas du Grand Jonquier (www.grandjonquier.com, doubles from €125, including breakfast), about 8km south of l’Isle-sur-la-Sorgue. As was immediately apparent, this was the sort of farmhouse B&B where the only way to leave is reluctantly. We arrived in time for a swim in the wonderfully eccentric and enormous gardens, where there were more hammocks and daybeds than you could wave a toy sheep at – and there were some of those too. Dinner was under a vast chestnut tree draped in chandeliers, serenaded by cicadas.

After this gentle introduction, we set off the following morning on our six-day walk through Provence’s landscapes. Some were familiar – lavender fields, olive groves and vineyards – while others revealed the more rugged side of Vaucluse.

The morning’s objective was the exquisitely pretty Fontaine-de-Vaucluse, reached after a 4km walk along rocky trails through pine and fir woods, whose heady scent had been released by the hot sun. Descending into the town, I could see a giant mossy waterwheel lazily churning up the impossibly green waters of the River Sorgue.

A waterside coffee at Les Terrasses was enough to sustain us for the one-kilometre steep ascent out of the village, where we spotted the first of many bories – those seemingly ancient conical stone shepherds’ huts found in this part of Provence. When the trail reached a plateau, I walked past bushes of wild lavender brightened up even further by clouds of butterflies. A farm just beyond had the obligatory lavender field in full bloom, where a pair of cyclists had already bagged the shady spot under a tree, so we carried on bit further to have our packed lunch by a little spring shaded by woods.

There was only another five kilometres to go along dusty exposed roads to reach our next hotel, the 18th century Domaine de la Grange Neuve (www.domaine-grange-neuve.com, doubles from €76), set in peaceful secluded grounds, south of the tiny village of La Roque-sur-Pernes. The sprawling gardens and excellent half-board food more than made up for the simplicity of the rooms – not to mention that feeling of utter bliss when you dive into a pool after a 13-kilometre walk in 30C heat.

It was tempting to spend the following day just lounging in those relaxing gardens, emulating Biscotte, the hotel’s sun-loving floppy-eared dog. But we had a circular walk to do that would take us to Venasque, one of France’s Plus Beaux Villages. Before we reached this hilltop village, we wandered past vineyards before heading downhill along a stony path that turned into an extremely narrow rocky channel. As I was gingerly making my way along the rocks, I could hear a man below shouting encouragingly in French. He wasn’t talking to me, but to his girlfriend who was strapped into a climbing harness above and was even more gingerly making her way down under the Jouvenal plateau. We had inadvertently stumbled upon one of the most popular climbing sites in the Vaucluse, where an intimidating wall of limestone was studded with climbing bolts drilled into the rock face.

After an uphill hike, Venasque and its ramparts were a welcome sight – especially the panoramic terrace at Le Petit Chose, where coffee came with views of forest-covered limestone hillsides. The village is pure delight, from its tiny fountain in the compact main square, to its galleries, medieval church of Notre-Dame and its little boulangerie, that made hefty baguette sandwiches which we stowed away to enjoy later in the cool of the forest. We took a quick detour along Venasque’s Esplanade past its two Roman towers. From here, there was a marvellous view of the Monts de Vaucluse and the Dentelles de Montmirail. Mont Ventoux was there too, according to the observation table, but it was hiding its barren peak behind a cloud.

Making a mental note to make a proper return visit, we carried on downhill on stony footpaths through woods towards tiny Le Beaucet. Soon I could see the forested hillsides we had covered earlier in the day as the village – which looked as if it had been hewn into the rock – came into view. As we walked up the cobbled streets past the ruined 12th-century castle, cats were lazily stretching themselves by the village lavoir, which, oddly and endearingly, contained a shelf of books.

Just three kilometres of uphill footpaths separated us from the joys of the swimming pool and those lovely gardens at Grange Neuve. Dinner on the restaurant terrace was a convivial affair, filled with the flavours of Provence including thin slices of courgettes and aubergines filled with goats’ cheese and served with pistou. A post-prandial walk along the empty lanes revealed the barren peak of Mont Ventoux in the distance as well as a large abandoned borie. Back in the gardens, I watched bats swoop in the twilight in hot pursuit of flies, while cicadas made their sound of summer. As far as rural idylls go, this one was working its magic.

The relatively bright lights of Gordes were waiting for us on our next day’s walk. Taking a gentle uphill gravel path in the direction of St-Gens, I would turn around occasionally and take in wide views of the Vaucluse valley below, with l’Isle-sur-la-Sorgue and Carpentras visible from a height of about 630m.

Abruptly, the ground beneath me changed from white limestone to deep red terracotta as we crossed into a different landscape. Signs were warning walkers that these were sheep-grazing grounds, but neither sheep nor shepherds were to be seen. Most of what we had walked formed parts of various GR (Grande Randonnée) routes, as did this one, which also incorporated one of the Vaucluse’s Véloroutes. But, like the sheep, all other hikers and cyclists were absent. In fact, we had run into very few people so far.

This was to change as we made our way through holm oak forests and back into limestone territory on a slightly tricky descent in the Vallon de Châteauneuf. At the foot was the unaccustomed sight of dozens of cars and scores of people. We had arrived at the Abbaye Notre-Dame de Sénanque, one of the most visited tourist sights in Provence. After enjoying near solitude for the past few days, it came as a bit of a shock.

At least you didn’t have to buy a ticket to cast your eyes on the vividly purple lavender field that sweeps in front of the Cistercian abbey. With the lavender in bloom, I had excellent timing to catch one of the most celebrated images of Provence.

Leaving most of the crowds behind – apart from a dozen or so who fancied a brief walk, and even they soon fizzled out – we took the rocky path uphill from the abbey towards Gordes. Dry-stone walls soon appeared, behind which were olive groves and discreetly expensive houses. Eventually the path led to another dry-stone wall, this one sheltering our next hotel, Le Mas des Romarins (www.masdesromarins.com, doubles from €100). Stepping out on to the hotel’s large restaurant terrace, I could see that this classy little three-star had bagged one of the best views of Gordes, another of France’s Plus Beaux Villages. The familiar hillside of houses that makes up this instantly identifiable village – with the Luberon valley and hills just beyond – could be enjoyed and savoured in peace.

Over the years I had cycled and driven to Gordes, but this was the first time I’d arrived on my own two feet. In just a few minutes I was in the centre, with its hulking medieval castle behind me and the lively Place Genty Pantaly and its fountain in front. Passing the attractive stone buildings filled with cafés and shops, I headed past the 12th century church and down the cobbled lane towards a viewpoint on the eastern side of the village. Here, the Luberon stretched out in all its glory, a serene patchwork of olive groves and vineyards surrounded by the deep green hills of the national park.

After a much-needed swim, there was the pleasure of dinner on the hotel’s terrace, where the quality of the food matched the vista. Stuffed courgette flowers followed by roast sea bass and spelt risotto were on the menu du marché that evening, and were as appetising as the sunset that was making the village skyline glow.

The following day’s walk gave me the option of taking a challenging trek through the Gorges de Véroncle, or a considerably less strenuous detour around it. Not really knowing what I was getting myself into, I opted for the adventurous walk – not realising quite how much scrambling and even some climbing there would be on the route. In spite of the toughness of the walk, I was utterly captivated by the beauty of the gorge, and I couldn’t help but feel proud that I hadn’t chickened out.

An evening stroll around Gordes revealed the village’s pleasantly unhurried side once the day’s visitors had gone home. We checked out the handful of market stalls that had sprung up in the square by the chateau before heading around the corner to Casa Rosario for large pizzas on its cheerful terrace.

After the previous day’s drama, the final walk of the week was much more manageable – even if it did involve another gorge, albeit an easier one. As we made our way back to the starting point near Lagnes, we criss-crossed the riverbed in the cool woods of the Gorges de la Sénancole, before we hiked up to a limestone plateau.

A track took us through woods of pines and chestnut until the landscape cleared and we could see the Luberon hills behind us. Ahead was a large sign saluting local schoolchildren who had planted 4,000 trees to replace those destroyed by a forest fire in 1989. Another moment in history came up as we reached the Mur de la Peste, a 27km wall built in the 18th century to stop the spread of the plague. Ignoring its macabre history, we found it an appealing place to sit on and eat our lunch while enjoying views of olive groves and blue hills beyond.

Arriving in Lagnes, we had come full circle. Well, nearly; instead of returning to Le Mas du Grand Jonquier, we stayed at its near neighbour, Le Mas des Grès (www.masdesgres.com, doubles from €95), where you could practically smell the lavender wafting over from a huge field next door. The hotel’s owners, Nina and Thierry, have created an enchanting place where you can unwind in the gardens and by the pool. There was even a covered outdoor kitchen where you could make your own picnic. But then I wouldn’t have wanted to miss out on Thierry’s superb cooking, enhanced by the balmy summer air as we sat on the terrace. His home-smoked duck breast is worth the journey alone.

After the thrills of discovering the Vaucluse’s wild side, I was back in familiar laid-back territory. Inexhaustible in their beauty, the many faces of Provence had cast their spell once again.

Mary travelled with Eurotunnel, which has fares from £79 each way (tel: 08443 353535; www.eurotunnel.com). The journey from Calais to Le Mas du Grand Jonquier takes nine hours. The nearest airports are Marseille, Avignon and Nîmes. Tourist information: www.provenceguide.co.uk.