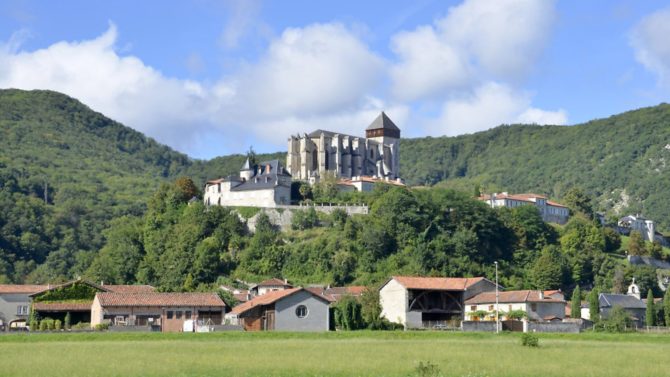 The 2020 edition of ‘Le village préféré des Français’ has been held, and the people have spoken. Here are four of the most beloved towns in France, and some lovely properties near them.

Every summer, residents of France take part in a televised competition to vote for their favourite town in the nation, from a selection of 13. This year Le Village préféré des Français was broadcast on 1 July, and the French public selected Hunspach, a quaint town in Bas-Rhin, as the winner. Hunspach, just 15 minutes from the border with Germany, was recognised for its attractive half-timbered white buildings, hearty local cuisine and long-held traditions.

While Hunspach reigns supreme this year, the shortlist featured many other beautiful French towns that are well worth knowing about, and could even make a great base for a permanent or holiday home. Here are four of our favourites!

This flowery Breton town hosted a gaggle of the most prolific Post-Impressionist painters in the late 1800s, and it’s not hard to see why. Named for the river that runs through it, the town is verdant and charming, with a small port and attractive stone cottages. Today many of the shops in the town centre are art galleries displaying local work, and the Musée des Beaux-Arts hosts fantastic exhibitions of the Pont-Aven artists and contemporary collections. The town is situated within easy reach of the ferry ports as well as attractions such as Concarneau, making it a popular spot for tourists and prospective homeowners.

€109,000, Finistère: Just half an hour away from Pont-Aven, this four-bedroom house is also near Quimper, Benodet, Concarneau and the lovely town of Chateauneuf-du-Faou, on the Nantes/Brest canal. Sandy beaces can be reached in 40 minutes. The property is immediately habitable and ready for a new owner to put their stamp on it.

Perched right on the Charente/Dordogne border, Aubeterre-sur-Dronne is a beautiful town, whose scenic setting, traditional architecture and historic sites have placed it on the Plus Beaux Villages de France list since 1993. Popular sites include the fascinating and vast troglodyte church of St-Jean and the Romanesque church of St-Jacques, although you could easily spend your time relaxing in the pretty squares enjoying local cuisine, or walking in the surrounding countryside. Charente has long been a favourite among expats and holidaymakers for its scenery, pretty towns and excellent tranport links.

€296,711, Charente: Four miles from Aubeterre and two miles from the local golf club, this fantastic listing offers two adjoinining properties with six bedrooms in total, giving potential buyers a good income opportunity. Renovated to a high standard with spacious rooms and high ceilings, the properties are accompanied by a large swimming pool with a pool house and views out over the fields.

The hilltop village of St-Bertrand-de-Comminges is easily recognised by its famous cathedral, which has a magnificent cloister and an elevated position with panoramic views over the area. The town has a rich history – founded in 72 BC by Roman General Pompey on his way back to Rome, St-Bertrand underwent several invasions and in 1083 became an episcopal see, as well as a stop for pilgrims on the route to Santiago de Compostela. Today, the rich history of the town and its beautiful medieval village have secured it a place on the Plus Beaux Villages list, as well as the Village préféré des Français.

Half an hour from St-Bertrand, in the commune of Rieucazé, is this paradise of a property. The six-bedroom ‘mini château’ has been restored and renovated to superb standards, using local materials to create stunning marble floors and wooden furniture. Outside there’s a large barn to convert as well as the former servants’ quarters. The property sits within lush landscaped gardens, with views of the Pyrenees and rolling hills. A wonderful opportunity for a luxurious home or business.

On the market with Beaux Villages

Yet another place that’s been named a Plus Beau Village as well as one of France’s favourite towns, Montpeyroux is a former winemaking commune with history stretching back to medieval times. Dominated by a towering keep from which you have magnificent views of the Allier valley, the town also features pretty stone houses winding around the hilltop, all accessed by a fortified gate. As well as historic sites to explore, Montpeyroux is also a great base for hiking trails – there are several which start in the town.

Nestled in the heart of historic Montpeyroux, this spacious property offers more than your typical village house. There are three bedrooms, large living areas, a cellar with a functioning Gallo-Roman well, and a garden with an above-ground pool and space for a vegetable patch. A rare find in a historic village, this could be a unique home or would no doubt create good income as a holiday let.

On the market with Sextant

You could buy these beautiful homes in Occitanie for less than €150,000

How will French taxes change for UK nationals after Brexit?

Previous Article Explore 5 of France’s least populated departments
Next Article Escape to the Château: Dick and Angel inspire families to make do and mend