Escape to the Château: Dick and Angel inspire families to make do and mend 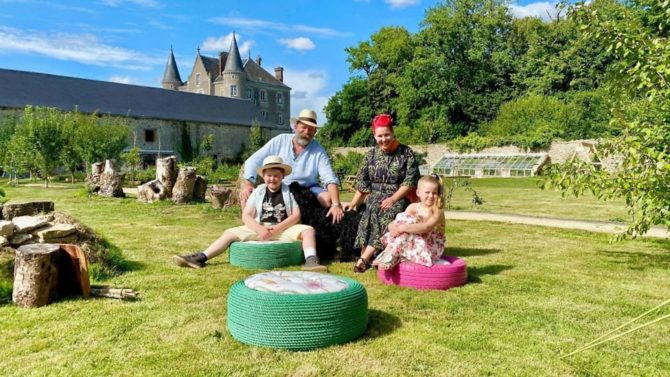 Inventive couple Dick and Angel Strawbridge are returning to Channel 4 with a new four-part DIY and homecraft series – Escape to the Château: Make Do & Mend.

The new show aims to help and inspire homeowners to solve make do and mend dilemmas with ‘how to’ advice, as well as sharing the couple’s own innovative tips and tricks.

Filmed by the Strawbridge family at their fairytale château in Mayenne, Dick and Angel teamed up with families from across the UK looking for practical advice and inspiration for a home project of their own.

Along with their children Arthur and Dorothy, the couple also tackle their own dream projects ending with a ‘big reveal’, and try out new pastimes to keep their family entertained.

The series will be filled with Dick and Angel’s ingenious ideas which they have become well-known for on their incredibly popular show Escape to the Château when they embark on various projects to bring their French château back to life. The couple hope to inspire more people to fall back in love with everyday objects and tackle those projects they’ve always wanted to do.

Dick and Angel Strawbridge say: “Between the pair of us we have nearly a century’s worth of ‘make do and mend’ experience and so we are really excited to share our knowledge and passion with families across the UK.

“Finding ourselves with more time at home is a fantastic opportunity to fix those items that have been waiting for years, or to embark on a creative project. Escape to the Château: Make Do & Mend is about giving something you’ve always wanted to do a go, and bringing some happiness and joy into your home.”

Escape to the Château: Make Do & Mend is a co-production between Chateau Television and Two Rivers Media.

The first episode will air on Thursday 30 July at 8pm on Channel 4. channel4.com

Escape to the Château: Dick and Angel launch Dare to Do It at Home competition

Escape to the Château: DIY checks into a boutique hotel in the south of France

Previous Article Buy a home in one of France’s favourite towns
Next Article Quiz: Summer words and phrases in French