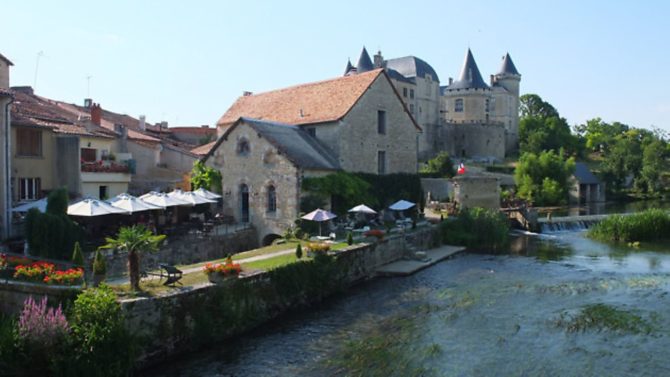 Karen Tait picks out five of her favourites in the sunny Poitou-Charentes department, from those ideal for househunters seeking city life to those wanting a village vibe

Poitou-Charentes has become increasingly popular in recent years. It’s easily accessible – about half a day’s journey from Channel ports, with airports at Poitiers, La Rochelle and Bordeaux – and is one of France’s sunniest corners. It has pretty countryside, a lovely coastline and many charming towns and villages.

In the south-east of the region, Charente is named after the river on whose banks many of its towns have grown up, including the departmental capital Angoulême. A working river in the past, it is now widely used for river cruising and outdoor activities.

Until recently Charente was relatively undiscovered, but its tranquil scenery, pretty villages and traditional lifestyle now appeal greatly to househunters seeking a gentler way of life. It’s a place to enjoy a lazy lunch in a quaint village square, join the locals in a game of boules, cycle through the vineyards, stock up with fresh produce at the market or head out on a winetasting outing.

Property wise, Charente offers great value for money. The cheapest of the four Poitou-Charentes departments, its average house price of €107,500 is €32,500 less than the regional average and a massive €122,500 less than La Rochelle on the coast.

If you’re looking to buy a house in a town, Charles Miller of Charente Immobilier advises choosing one on a river: “It adds so much more dynamism to local life, and in Charente you’re spoilt for choice. Most of the major towns are either on the banks of the Charente itself or one of its major tributaries.”

The departmental capital, Angoulême, is known the world over for its International Comics festival – everywhere you look you’ll spot quirky cartoons painted on any available flat surface – while mills along the river are testament to its Medieval role as a centre for papermaking. The city also hosts a classic car race around the ramparts as well as a lively food festival (Les Gastronomades).

For those seeking a choice of shops, bars, restaurants and culture, Angoulême certainly meets those needs, but it’s not so large that you need to worry too much about traffic, crime and other afflictions that mar larger conurbations. History abounds, from the town walls to the Romanesque cathedral, while winding cobbled streets lead up to the pretty squares of the old town.

As with any larger towns and cities, especially one with a university, Angoulême offers good rental opportunities for those who’d like to see a return on their investment. “Most international buyers tend to buy in the surrounding towns and villages rather than the centre of Angoulême itself,” explains Joanna Leggett of Leggett Immobilier. “If you’re looking at the surrounding towns then head south towards Villebois Lavalette and its imposing château, north to the riverside town of Mansle, west towards Montbron on the River Tardoire or east towards Châteauneuf-sur-Charente with its river beach. You’ll pay a premium in Angoulême city centre with prices lower to the east than to the west (closer to Cognac and the coast).”

While Cognac might seem the obvious choice, I’ve actually picked out the smaller town of Jarnac. Just 14km upriver from its better known neighbour and 30km from Angoulême, the pretty town is home to the famous Courvoisier brand and was the birthplace of the former French President François Mitterrand (you can visit his gravestone and a museum dedicated to him).

“With a history stretching back over 2,000 years, Jarnac remains a prosperous little town attracting many tourists,” explains Charles Miller. “It is officially designated as a ‘station verte’ – a holiday destination for outdoor activities such as canoeing, cycling and walking.”

“Property in Jarnac town centre is always popular with international buyers,” says Joanna Leggett. “Look out too for the adjacent riverside villages, such as Bourg-Charente with its Michelin-starred restaurant, Bassac, Vibrac and St-Simon, where you can take a river trip on an old ‘gabarier’ boat.

“Typically, you can pick up a four-bedroom townhouse in excellent condition for under €200,000 or a family house in the country with pool and views over the adjacent vines for between €300,000€350,000.”

At the northern tip of the department on the River Lien, Ruffec is a lively market town with an attractive square, Romanesque church and a good choice of shops, restaurants and bars, as well as local amenities like a cinema, theatre, library and leisure centre, and a handy TGV station with trains to Paris and Bordeaux.

The town dates back 1,000 years – its castle ruins are testament to this – while more recent history involves the intriguing Resistance tale of the ‘Cockleshell Heroes’ who hid here before being smuggled into Spain following a daring raid on the German navy in Bordeaux harbour.

Close to Ruffec, the quaint villages of Verteuil-sur-Charente and Nanteuil-en-Vallée are particularly popular with tourists.

“Ruffec itself is a quintessential riverside French market town – full of character and with a good buzz all year round,” says James Rolt of Compagnie Immobilière Charentaise. “Property is still very affordable – a renovated two-bedroom property with garage and courtyard just 50m from the square is just €63,000, a renovated five-bedroom townhouse with garden is €227,000, while a historic four-bedroom property in the old town with a stunning garden is €318,000.”

“Properties are slightly lower in price than further south, particularly rural properties where you’ll find plenty of barns to renovate at knockdown prices – we have a couple as low as €26,000,” comments Joanna Leggett, adding that around €200,000 would buy a good condition property suitable for a family.

In the north-east of the department, Confolens is located where the Vienne and Goire rivers meet, and has many picturesque medieval buildings, a keep and two bridges. The small town gets very busy in summer months, especially during August’s Festival de Folklore, which attracts musicians and artists from all over the world.

“Arriving over the bridge spanning the Vienne river and seeing the town unfold before you is one of the most picturesque sights in this area, comments James Rolt. “The town is ideally located to benefit from flights to Limoges airport just over half an hour away and property prices in this area are incredibly attractive. A three-bed stone property with over an acre of land just outside the town is currently on the market for €141,000 while a farm complex with a four-bed house, outbuildings and small lake is €184,000.”

Joanna Leggett echoes this sentiment: “Our portfolio here is full of bargains – you can pick up a townhouse for under €100,000 or a five-bed barn conversion in the country for under €300,000.”

To view properties for sale in Charente click here