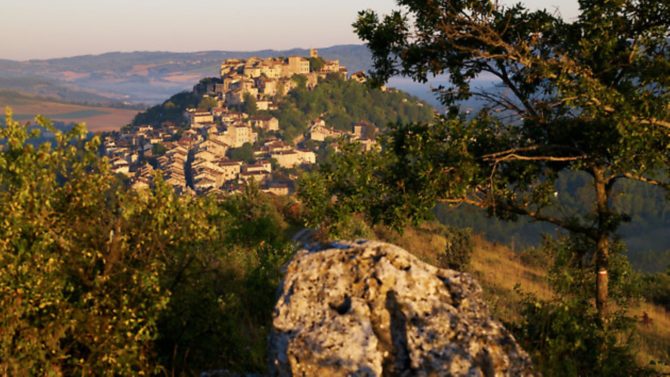 This is another accolade for this picturesque medieval village, also recognised as one of France’s Plus Beaux Villages and is listed as one of the Grands Sites de Midi-Pyrénées. Considered to be the first bastide ever built, it clings to the top of the Puech de Mordagne some 100m above the surrounding river valleys and, often appearing to float due to mists in spring and autumn, its name literally means ‘Cordes in the sky’. It’s a steep climb up cobbled lanes to the top, where you are rewarded with a breathtaking bird’s-eye view.

The Grand Falconer’s Medieval Festival brings the Middle Ages to life here every July and the village has become an important centre for contemporary art. It is also home to the rather unique Musée Les Arts du Sucre et du Chocolat, a permanent exhibition of pieces created exclusively from sugar and chocolate. The local speciality is a biscuit made from almonds and caramelised sugar called a croquant and, as luck would have it, Cordes-sur-Ciel is at the crossroads of the Gaillac wine appellation and is thus surrounded by vast expanses of vineyards, should you also require liquid refreshment.

Nestled in the valley of the Andlau river in the foothills of the Vosges mountains and surrounded by forests and vineyards, the village of Andlau is located on the Alsace Wine Route, the Route des Vins, and it is home to winemakers who produce dry and fruity wines belonging to the Grand Cru appellation. The village itself developed around an abbey of nuns founded in 880 and the streets are lined with the half-timbered, pastel-coloured buildings that are so typical of this part of France. Consecrated by Pope Leo IX in 1049, the church of St Peter and St Paul boasts a number of Romanesque features, including an 11th-century crypt as well as the most intricately carved portal in Alsace. Andlau also caters for sporty types who are keen to make the most of the great outdoors. The forest surroundings provide ample opportunities for walking and cycling, and the Vosges mountains regularly host a stage of the Tour de France. Germanic influences still remain here, giving the region its distinctive character in terms of the architecture, traditions and gastronomy. You’re sure to find specialities such as Flammeküche and Kugelhopf on the menu in Andlau, and the Christmas market is the ultimate in authentic marché de Noël experiences.

Providing the setting for the French television film Bienvenue à Bouchon in 2010, traces of the past lie around every corner in this medieval village. Situated at the confluence of the Voueize and Tardes rivers, it grew around a monastery that was founded in the 9th century and became a place of pilgrimage. This in turn led to the construction of the imposing abbey church, and this magnificent example of Romanesque art is one of the largest in Limousin. The 14th-century bridge spanning the River Voueize is yet another example of Romanesque architecture, and delivers pedestrians into a maze of small lanes and alleys in the centre of the village. Home to all manner of flora, fauna and wildlife, the nearby Voueize gorges offer a haven of peace and tranquillity, with marked hiking trails for easy exploration, while the Étang de la Reyberie will keep keen anglers occupied for hours. If rest and relaxation is more your cup of tea, neighbouring Évaux-les-Bains was founded as a spa resort by the Romans who developed the thermal baths, and now offers everything from saunas and jacuzzis to massages and facials.

Belle-Île is an island lying just off the Brittany coast, measuring just 17km by 9km but home to almost 150 villages – one of them coming in at number four. Sauzon is known for its brightly coloured houses and large port. In 1843, the installation of three fish-canning plants established the port’s fishing industry, which boosted Sauzon’s economy and saw the creation of traditional fishermen’s houses along the quay. Today, the marina is a popular port of call with amateur yachtsmen sailing from the Golfe du Morbihan or further afield, and during the summer months in particular it attracts visitors in their droves. In addition to its spectacular rock formations, Sauzon is also home to the Grotte de l’Apothicaire (apothecary’s cave) and the Phare des Poulains lighthouse, and there are a number of trails which start from the village that are ideal for exploring on foot or on two wheels. A stroll along the coast is certainly not to be missed. Twinned with Aillon-le-Jeune in the Savoie department of Rhône-Alpes since October 2001, the two decided to form an alliance to exchange their respective cultures and traditions.

Perched on an outcrop of volcanic rock above the Volane and Bise rivers, Antraigues-sur-Volane certainly puts a very big tick in the picturesque box, and when you factor in the proximity of the Parc Naturel Régional des Monts d’Ardèche, it’s got scenic covered too. The vilage’s hilltop location does of course mean there’s more climbing involved to get there, but your efforts will once again be rewarded by the spectacular view and there are more than enough cafes around the main square to provide suitable refreshment. Centuries-old chestnut trees can be found in abundance (Ardèche is the largest chestnut-producing department in France) and the village hosts a chestnut festival each year in October to celebrate its star product. Often referred to as the artists’ village, Antraigues-sur-Volane hosts regular exhibitions of work by local painters, and you’ll also spot sculpted heads embedded in walls throughout the village thanks to an initiative by the painter Jean Saussac. In 1964 the French singer-songwriter and poet Jean Ferrat bought a house in Antraigues-sur-Volane and lived there until his death in 2010. Since then the Festival Jean Ferrat has taken place every year in July, and a museum dedicated to his life and works opened in the village in 2013.