Owning a holiday home in the Loire Valley 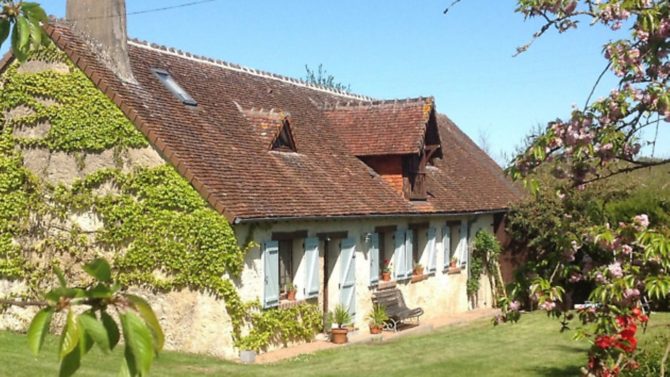 What are the advantages of having a second home in France? We talk to a family who have owned a holiday home in the Loire Valley for 14 years to find out how it has enriched their lives

It’s often described as being the best of both worlds, and for Tony Markowski and his family, having a home in London and a house in France’s Loire Valley has forged strong bonds with extended family; not only has it enhanced their lives, but it’s also enhanced those of a wide circle of friends too.

Tony and his wife Sally bought their property La Basse Lande, near the village of Loché-sur-Indois, in 2001, but Tony’s connections with the Touraine area in the Loire Valley go back much further than this – centuries further in fact. Tony is of Polish descent, and one of his ancestors acquired the château in nearby Montrésor in 1848. Descendants of this branch of Tony’s family still live there and he has many relatives in the village.

Having previously owned and sold a village house in Montrésor, Tony found La Basse Lande at the end of a long search, but as soon as he saw the traditional longère (long house), tucked away in a tranquil spot, he knew he’d found the right place.

“I was looking for a long time,” he says. “I found it through an estate agent who called me and said it had just come onto the market and I might be interested. In fact, I saw it and bought it on that same day. It’s down a little lane with farmland all around it. I went down and had a look at it… and that was the one.”

The property was habitable, but Tony and Sally have redone and updated it over the years, installing a luxury kitchen, two shower rooms, new stairs and flooring; furnishing and redecorating to create an inviting homefrom-home for themselves and their two, now grown-up, children Joe and Hannah.

The renovations have been tremendously satisfying for Tony, who has been very hands-on with the work, while leaving the more complicated jobs to the professionals: “I’ve been assisting people who are better than me at doing it,” he says. “It’s great and I’ve built up long-term relationships with local builders, who help out whenever I need, and also the local farmers who’ve helped me with the land.”

His current project involves creating a large, en-suite bedroom at the end of the house, over what used to be a garage, and he can’t wait to get back out to Touraine in order to tackle the next stage.

La Basse Lande, which comfortably sleeps 10 – eight in the main house and two in a romantic room in the garden – is surrounded by extensive grounds, including formal gardens, a wildflower meadow, an oak grove and woodland.

“We moved out of the village, where the majority of the family live, essentially to get into the countryside. We’ve now got three acres of lawns and woodland. If you walk down to the water meadow at the end of our woodland in the mornings you will often see deer and, if you’re lucky, wild boar. The terrace is surrounded by lavender, which attracts an abundance of beautiful insects including butterflies and moths in the summer.”

Tony’s deep family roots in the Touraine area have created a profound connection with this part of France. At home in London, La Basse Lande is never far from his thoughts and he is looking forward to the time when he can hang up his business suit for good and enjoy extended periods in the Loire Valley.

“There are lots of pictures of La Basse Lande around our London home, so you don’t forget it. We get out there as often as possible. Perhaps five times a year, which is great,” says Tony, who is the director of a multi-academy trust in the capital. “My son Joe has just been there with 12 friends for New Year; Sally was there just before Christmas with three girlfriends, and I was there working in November. I was back there in February to do a bit more work, and we were all out there at Easter as a family.

“As I get closer to retirement, I’m looking forward to a bit more time there later on. Probably not permanently, but we will spend months out there; perhaps half the year – that would be the ideal from my perspective.”

Having such an affinity with France has been lifeenhancing for the whole Markowski family and also for their friends who are regular visitors. Some of them have been so taken with the Loire Valley that they have bought second homes there too.

“The Touraine area is a gently rolling landscape – it’s very nice. It’s château country. There are excellent wines, terrific food, lovely countryside, fascinating culture, woods, lakes and rivers,” says Tony. “Being there allows me to be a kid again; I can cycle, swim… play essentially, and my kids have had that advantage too. They’ve been going there since they were babies. They’ve built up a big friendship base there, and have got to know all their French cousins. Both the kids have exchanged with the children of Yves and Pascale, who I exchanged with as a kid. That’s great.”

This cross-cultural connection has been both rewarding and enriching.

“The children have been immersed in another culture with the expectation that they learn the language, which has been great for them. It allows us all to experience a completely different way of life,” says Tony.

“We live in London and so to get out there to our second home is to instantly relax and get into a different life. Although actually, relax is the wrong word for me. I’m immediately in the garden or doing stuff, but it’s completely different and it’s often physical which is fantastic. It brings out the inner farmer in me! We also have a very special set of friends and family there whose company we enjoy enormously. It’s a real juxtaposition to London. You can step out of your life and you leave the suit, and all that it stands for, at the gate as you arrive.”

And many other families have also had the opportunity to enjoy all that La Basse Lande has to offer. When the Markowskis are not there, they rent out the property to holidaymakers to ensure it earns its keep, and their online visitors’ book is a testament to the many happy times that people have enjoyed at the house.

“It wasn’t a priority but it means that it keeps washing its face,” says Tony. “We had been doing it with the house we previously had in Montrésor; in fact rather more successfully because it was smaller and easier to rent out. This one sleeps 10 so it tends to go less often, but touch wood, it’s all been good.”

Their guests are not short of places to visit and things to do during their holidays. The historic city of Tours is just a 45-minute drive away, while the pretty town of Loches and historic Montrésor are very close by.

“The Loire Valley is an enchanted land of vineyards, flowers and rolling green hills dotted with more than a thousand châteaux,” says Tony. “Loches is a fortified medieval town that is absolutely beautiful. It has a farmers’ market on a Wednesday and a Saturday. It is a stunning town to go and see, and has all the amenities you might need. Tours is a famous French university town with lots of shops and a beautiful old town centre, and Montrésor is one of the Plus Beaux Villages de France. It’s really quite special.”

But at the end of the day, having a second home isn’t about the extra income, useful as that may be, it’s about the extra dimension that owning La Basse Lande has brought and continues to bring to their lives as a family.

“We spend a lot of time with my extended family, and it’s a cross-generational thing,” says Tony. “At a birthday party not so long ago we had about 120 people at our place, most of whom were relatives, and it was kids to grandparents.

“There are real roots there. My mother and father are buried in the churchyard in Montrésor and I’m going there too, in due course!

“A lot of our memories are there, from my own and the children’s childhood, like my daughter jumping off the biggest bridge into the river when she was three and my son, not to be outdone, doing something similar in much more dangerous circumstances; family-orientated milestones like that are so precious.”

Ultimately, Tony is unequivocal about the benefits of owning a second home in France: “It’s life-changing. It’s absolutely life-changing and life-enhancing… do it!”