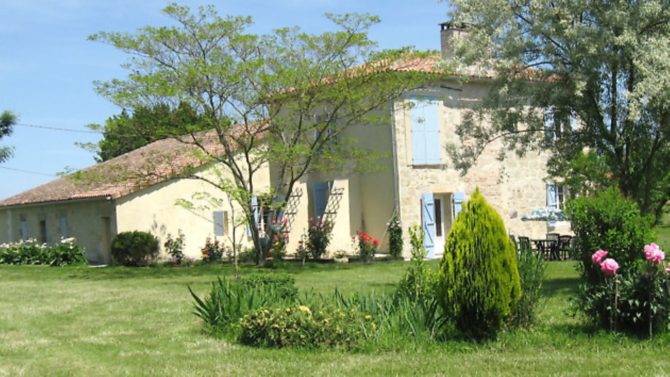 It all started with Gordon Brown. The date was Friday 14 September 2007 and my husband Peter and I were in a Hertfordshire hotel bedroom preparing for the long trip back to south-west France.

Suddenly, chaos erupted and there was drama all around. Northern Rock, that stalwart of high street banking, had collapsed. This horrendous news, heralding the banking crisis, had suddenly exploded onto the airwaves sending shockwaves of panic and fear across the nation and right into our lives.

Peter had invested all of his money into an internet account. Was this another Wall Street 1929 re-enactment? Were all those grey-faced people forming mile-long queues outside local branches ever going to get their money out? As it turned out they were the lucky ones, because they had current accounts and money retrieval for them was far easier than for Peter, whose bank account was solely internet-based.

Naturally, as part of the general financial mess, all internet accounts had been frozen. So what to do? It was so worrying to leave the country but pointless to stay. Furthermore, we had just signed a seven-month contract on a gîte in Lot-et-Garonne. So we simply decided to bite the bullet, leave anyway and remain glued to news updates throughout the trip.

Three days into the journey and we were in Limoges (I really do remember this moment as though it were yesterday). Our mobile rang, bringing news that Gordon Brown had guaranteed all Northern Rock savers would have their money.

We were safe! We were free; we could continue living the dream: escape from England and be on our way. Now, all we had to do was find a house.

Towards the end of 2007 and at the start of 2008, property prices were still encouragingly high in south-west France and both French and British sellers could hold out for the highest bidders. Our requirements were not that exacting. Peter wanted to be near a golf course and I wanted to be close to some stables, preferably with good horses in them.

We wanted a largish period property with exposed beams, proper stone walls and original fireplaces, and we wanted to live just outside a pretty village. If there was a nice garden and some land attached even better.

This might sound like the clichéd English wish list but there was only one agent who really listened to what we wanted and she showed us two outstanding properties on the very same day.

We made an offer on property number one immediately – an 18th-century farmhouse in Seyches – only to have the offer accepted and then rejected on the very day we were due to sign the contract. A couple from Paris had sneaked in a viewing during the intervening weekend and made the owners a better offer. As it happened, they had done us the best favour ever.

first sight of the future

The second property our perceptive agent had found was an entirely different proposition. Set in two acres of safari-style swamp and mile-high grass, Frenaula resembled a cross between Bleak House and a battered remnant of the French Revolution. This has never been a house for the faint-hearted. None of this bothered me as, being both a romantic and an ardent devourer of French literature, I was so entranced that I fully expected to be greeted on arrival by one of the Three Musketeers.

Allegedly a former hunting lodge, the property was certainly large and contained several period features. Most of all, the place had presence and such a feel of le temps perdu that its power was almost overwhelming. So we bought it.

Needless to say, on a practical front, first impressions were the stuff of nightmares. All the main exterior walls were covered in forbidding grey cement; walls on either side of the front barn doors were either smashed or had fallen in; remaining walls were covered in ivy and the front area was dark, damp, alive with mosquitoes and condemned to perpetual gloom by sick and ugly trees.

Horrible plastic piping hung precariously off the corner walls; cracked broken steps led up to the main entrance and there appeared to be only one living shrub across the entire two acres of soi disant parkland.

Even more challenging was gaining access to the underground cave. The steps down had long since disappeared. One simply had to scramble down the dried mudslide, smash into the broken-down door at the bottom and, if still alive, navigate a way through silty water and darkness to reach (and this could only happen in old, old France) a magnificent and fully stocked wine cellar. Ah, c’est la vie.

Inside, matters continued to disappoint. There was a kitchen which looked as though it had last seen service during the Franco-Prussian war, a grand salon which dangerously featured open wiring in every dirty corner and there appeared to be no upstairs floor despite human occupancy for the past seven years.

The estate agency details actually stated that the property ‘had been restored’ by the current owners and, when considering that his previous incumbents had lived in Frenaula without proper sanitation, electricity and central heating, well, I suppose it had.

So why did we buy this decrepit old heap? Easy. Frenaula had real class. It was not difficult to deduce from the size and position of the house, standing high on the brow of a hill and perfectly placed in the middle of its own park, that once upon a time this place had been important.

In fact, from our research at the archives départementales in Agen, we discovered that Frenaula was listed as a maison noble dating from the 15th or 16th century. It had been part of an estate owned by aristocratic proprietors and others who had gradually sold off all the farms and surrounding land until just the house and park remained.

For us, this place was complete perfection. It encapsulated the phrase ‘la France profonde’ or old, rural France. Its dreamy, wrecked beauty; the soft, verdant land and woods on all sides; the same families for miles around farming the same land their forefathers had done before them; the unchanging certainties of life and death and, most of all, this glorious, sacred terrain. We were hooked.

and so to work

We took possession in April 2008 and began the massive renovation project the day after moving in. There wasn’t one door which fitted properly, not one fully functioning shutter, not one room free from draughts, nor one window not in terminal decline. Most of the roof had to be replaced, all plumbing and wiring redone and new drainage and sanitation systems needed to be installed.

While Peter (a design engineer) undertook the doors, windows, shutters and the interior stonework himself, other major works were assigned as follows.

All exterior stone work, cementing, floors and tiling went to a local French builder; plumbing to an excitable French/Spanish plumber; and the roof was redone by a gang of enthusiastic Portuguese workers.

Using hand signals and appalling franglais, Peter project-managed the entire thing while I just struggled to keep the show on the road. However, even before these major works could begin, it was essential to deal with the jungle-like mess in the park. For the purpose, two local paysagistes (experts on the countryside) were hired and, those early sunlit mornings, beginning with Tarzan’s frantic barking and ending with a shared drink and chat with the paysagistes, are among our happiest memories.

As the first year progressed, so did the work. Large trees were cut down at the front of the house and the land, including a derelict vegetable patch, was laid to grass. The cave and the well were renovated, winding stone pathways dug out, plus a sizeable parking area and a lovely terrace were created just outside the lounge.

Our handyman and great friend, Jean Guy, asked to be let loose on a plot of weeds and vegetation at the front of the house, only  to reveal an old and graceful stone wall  which now separates the first orchard from  the front garden. We now have fully functioning orchards, a rose garden, leafy copse, proper flower beds, winding stone pathways, a pond and a very deep well, fitted with an electric pump, which is perfect for doing all the watering.

Inside we have an upper floor with art gallery, office, bedroom and two bathrooms and down below, two further bedrooms, kitchen, utility area, grand salon and enough space left in the barn to expand even further if we should so wish.

It is now just over five years since we came to live in this magical place, and having survived the banking crisis, two tornadoes, a change of government in France followed by recession, I still have to say that we are happier than we’ve ever been.

Any regrets? None whatsoever, except I just wish we had started all this sooner, then we would have longer to live in this beautiful place, to enjoy every minute and to think just how lucky we are.

So thanks, Gordon, thanks a lot!