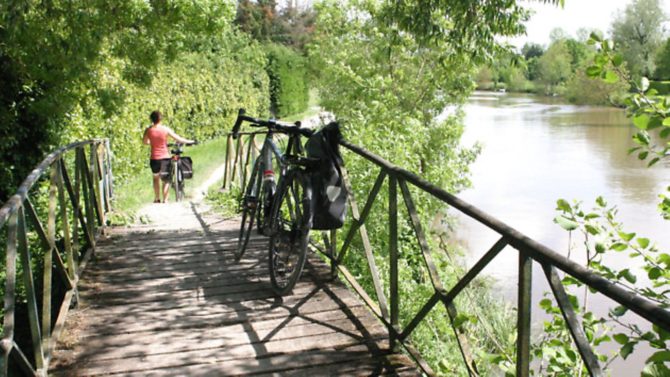 La Vélo Francette starts in La Rochelle, where it joins with La Vélodyssée, the 1,200km route that roughly follows the Atlantic Coast. La Rochelle has a rich cycling pedigree, having pioneered the world’s first public bike share programme in the 1970s (long before Paris and London caught on). It’s still popular with cyclists, who use it as an access point for the lovely Île de Ré.

“Benon and Courçon, communes around half an hour from La Rochelle and close to the border with the Charente department, are good value for money,” says Romain Lenne of Sextant Properties. “You can expect to buy a three-bedroom Charentaise house with a good-sized garden for between €179,000 and €235,000. “For something a bit larger that can be converted into a chambres d’hôtes, look to budget between €250,000 and €340,000. For a gîte-based property you’re looking at between €450,000 and €800,000, depending on the size, number of gîtes and their quality.”

This 18th-century stone house in Courçon is ripe for conversion into a holiday let business and is for sale for €189,000. There are four bedrooms and attic space, plus several barns and outbuildings, including an old wine warehouse. In total, the land amounts to 4,851m² and comes with a private walk, fully enclosed gardens, fruit trees, a pond and two wells.

Arçais and Coulon are the key La Vélo Francette bases for exploring the delightful Marais Poitevin and its rich tapestry of marshlands and canals. The road from Coulon is a leisurely route along dedicated bike paths and into Niort. From Parthenay, La Vélo Francette utilises the excellent Le Thouet à Vélo, which heads north to Thouars and on to Saumur. Though already popular with cyclists (and tourists in general) there are enough roads and villages here to still be able to enjoy some quiet time.

“Any of the villages around the historic fortified town of Parthenay, set on the banks of the River Thouet, offer excellent value for money,” says Romain Lenne. “It’s possible to get a property that can be converted to a B&B from just under €100,000 through to €250,000, but there are also opportunities to buy existing businesses. For a gîte property with no work to be done, expect to pay between €350,000 and €650,000 for something special.

This lovely property in Brioux-sur-Boutonne, south-east of Niort, is set in four acres of parkland near the Charente River. It’s already operating as a chambres d’hôtes, and also has two gîtes. For sale for €614,250, it’s ideal for a small business keen to introduce visitors to the joys of the French countryside.

Sitting almost anonymously between Normandy and the Loire, Mayenne is something of a hidden gem. This section of La Vélo Francette along the Mayenne river, for me, is one of the highlights of the entire route. In two days, we barely saw a car, with the cycle path hugging the river from the doors of La Crêperie La Batelière in Grez-Neuville (a great place to stop) through Château-Gontier and north to Laval, Mayenne town and Ambrières-les-Vallées. En route, it passes lock after lock, each complete with its own picturesque lock keeper’s cottage. This is prime car-free cycling, and perfect for families and newer cycle tourists – it’s pancake flat and safe, providing you keep your eyes on the towpath and don’t get too distracted by the pretty surroundings.

“Good-value areas include anywhere within easy reach of Mayenne, Laval and Ernée,” Jane Thom of LBV Immo tells me. “There is a genuine lack of good chambres d’hôtes in the area. For €150,000 you could purchase a country property requiring conversion, or you could look at an impressive townhouse in the centre of Mayenne for around €350,000. “For that rare find, an up-and-running chambres d’hôtes that’s also for sale, you’ll need a minimum budget of €200,000. A property with a gîte to renovate could be snapped up for as little as €100,000, while a fully renovated country property with an established gîte in mature gardens would set you back upwards of €200,000, depending on the quality and location.”

This impressive townhouse in Mayenne town is crying out to be turned into a chambres d’hôtes. It has four bedrooms plus an attic that can be converted. Full of period features and set in more than an acre of grounds, it’s just a short pedal from the La Vélo Francette route and is for sale at €346,125.

Domfront is at the heart of cycle tourism in Orne, being the crossroads of La Vélo Francette and the Paris to Mont St-Michel bike route. It’s also a historically important town: its castle was claimed by William the Conqueror in 1049 and was later ruled by his son, Henri, who went on to become King Henry I. You can still visit the ruins of the Norman castle, which offer sweeping views of the countryside and explain why the site was so strategically important in centuries past.

“Be realistic in your expectations,” warns Corey Koch of Leggett Immobilier. “It is a buyers’ market, but owners do know the value of their homes. That said, there are still bargains to be had as some owners are facing difficult times. “Outside the larger towns in Orne there are some excellent properties at very good prices. For a house that can be converted to a chambres d’hôtes, you’re looking at upwards of €150,000, and from the €200,000 mark for properties with gîte potential.”

Situated near Flers, this barn conversion has plenty of wow factor and is ideal as a main home or holiday rental within reach of the ferry ports. For sale for €215,000, it has four bedrooms and two bathrooms, and is set in just under an acre of gardens.

This is the final leg of La Vélo Francette and the gateway to the ferry port at Ouistreham. It’s also home to some of the hilliest cycling on the route (as one local cyclist told me: “It’s not called La Suisse Normande for nothing!”). Once you reach Thury-Harcourt, you’re led all the way to Caen on one of the most spectacular pieces of cycling infrastructure you’ll ever see, complete with road barriers at village crossings and rest points for horses sharing the route.

“Prices are similar to those in Orne, though slightly higher the closer you get to the ferry port,” says Corey Koch. “South of Thury-Harcourt is a really good-value area. “In general, though, we’re still seeing a lot of second home owners buying in Calvados as the proximity to the ferry port continues to make it popular. Hotspots include areas around Clécy and Pont-d’Ouilly.”

This enormous property in the heart of Pont- d’Ouilly is already set up as a holiday business and is on the market for €293,000. The house overlooks the River Orne, with La Vélo Francette passing right through town.

More in Cycling in France, French property for sale