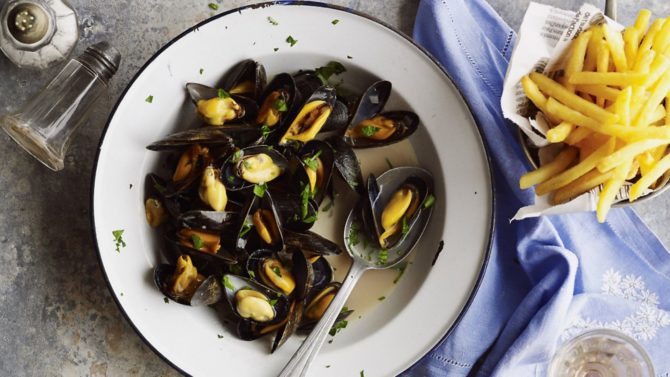 France is famous for its food and drink but the local specialities vary considerably in each region, so we have made a list of the must-try regional specialities so you don’t miss out

Food and drink in Hauts-de-France have a Flemish flavour with specialities including Flemish beer, beef braised in Flemish beer and moules-frites. Try ficille Picardie, a ham and mushroom crêpe baked in a rich cream sauce, or the less calorific waterzooi a fish stew that originated in Belgium but has made its way over the border into northern France. The most famous cheese from this region is Maroilles cheese which is delicious in a tart. For something sweet try macarons d’Amiens.

The cuisine of the north-eastern region of Grand-Est is heavily influenced by Germany, especially the former region of Alsace. Specialities here include choucroute (sauerkraut) and Alsace’s take on a pizza, called tarte flambée, usually topped with cream, onions and lardons. Probably the most famous Alsace dish is baeckeoffe, pork, lamb, beef and sliced potatoes slow-cooked in a white wine sauce. For those with a sweet tooth try pain d’épices (a cake or bread made from honey, rye, flour and spices) or kouglof (a sweet brioche with raisins). Probably the most famous dish from Grand-Est is a staple in our picnic baskets – Quiche Lorraine, named after the former region of Lorraine. Also look out for Mirabelle plums, small yellow plums often used in tarts, clafoutis and jams. Obviously the major speciality of the Champagne area is champagne but what do you eat with it? If you’re in Troyes then andouillette is the dish of choice – an offal sausage – while Reims is known for its fine ham. Potée champenoise is a harvest-time stew containing smoked ham and sausage. In terms of cheese, Alsace is very proud of its Munster cheese, an unpasteurised soft fermented cheese, while Brie de Meaux is probably the best-known cheese from this area.

An insider’s guide to each French region

When in Brittany, head to a crêperie. Breton crêpes come with all types of toppings so don’t just stick to Nutella! Also try a Breton galette, a savoury buckwheat flour pancake that is delicious with melted cheese. Brittany is also known for its seafood, including the famous oysters from Cancale – one of the best ways to try it is with a plateau de fruits de mer accompanied by a local cider. Those with a sweet tooth should try a Kouign Amann cake.

Normandy has one of the most delicious cheese boards in France with local specialities including Camembert, Neufchâtel, Pont l’Evêque and Livarot. Apples are another local speciality and you will find them in a number of desserts as well as the local tipples of cider and calvados. Given Normandy’s long coastline it is hardly surprising that seafood is on most menus, particular treats to look out for are Marmite Dieppoise (a fish stew from Dieppe) and Coquilles St Jacques (scallops) from Port-en-Bessin.

Freshwater fish are a regular on the menu in Pays-de-la-Loire, and the famous beurre blanc sauce is the perfect accompaniment. Or try mussels raised in the Baie de l’Aigullon and the Vendée Atlantic oysters. Another of the regions’ famous specialities is fleur de sel, a fine or sometimes coarse salt that is harvested from the salt marches of the west coast. Rillettes – a type of coarse pâté, often served on a slice of rustic bread – are a must, especially when you are in Le Mans, while in Anjou you should try rillauds d’Anjou, pieces of pork belly often served with creamy, white beans known as mogettes de Vendée. Pays-de-la-Loire is also known for its biscuits, including the famous Petit Beurre LU biscuit from Nantes.

Obviously the Loire Valley is world-famous for its wines but the area also produces some delicious dishes to accompany the wine. Try one of the local goat’s cheeses, including Crottin de Chavignol, Sainte Maure de Touraine and Valençay. Rilletes de porc from Tours are just as popular as those from Le Mans and andouillette sausage cooked in Vouvray wine is a popular dish. Other specialities include truffiat (a puff pastry filled with potatoes and cheese) and one of France’s best-known desserts, tarte Tatin, which originated in the Centre-Val de Loire region.

The former region of Aquitaine is situated in the south-western corner of France and has a rich cuisine. The area is particularly known for its foie gras – literally meaning ‘fatty liver’ and made from duck or goose it is very popular in south-west France. Duck and goose dominate the menu and a must try dish is confit de canard. Truffles are also a favourite here so look out for them on menus. The former region of Limousin is home to a number of cows so unsurprisingly Limousin beef is a staple on most menus along with local lamb and pork. If fish is more your thing then head to the Atlantic coast for some delicious seafood, in particular try Marennes-Oléron oysters which have the AOC label. The other seafood to try is mussels, preferably in the form of Mouclade (mussels cooked in white wine and covered in a creamy sauce) in La Rochelle. Goat’s cheese is another local speciality in Nouvelle-Aquitaine, especially the famous Chabichou goat’s cheese, alternatively try Roquefort, dubbed ‘the king of cheeses and the cheese of kings’. For dessert indulge in a clafoutis (a flan with cherries) or a canelé de Bordeaux, a small cake with a thin caramelised crust and soft centre flavoured with vanilla and rum. Of course the wines are delicious in this region but also try cognac and the delicious apéritif pineau des charentes.

French food you need to try at least once

Cassoulet is one of south-west France’s most famous dishes. Depending on who you ask it originated in Toulouse, Carcassone and Castelnaudry as a peasant dish that could be made with port, sausage, duck confit, gizzards and white haricot beans. Along the coast, fish and seafood are popular, try bourride a la sétoise in Sète (the area’s version of bouillabaisse) or Brandade de Morue (salt cod made with aioli sauce) in Nîmes. Goose and duck are popular in Midi-Pyrénées with local specialities including magret de canard and gésiers. A must-try in this area is aligot, a speciality of Aveyron, (mashed potatoes with garlic, cream and cheese) and often served with sausages from Toulouse. For dessert try crème catalane, the area’s take on a crème brulée, a croustade aux pommes – puff pastry and apples flambéed with Armagnac – or violet-flavoured sweets from Toulouse.

The menus along the Côte d’Azur are distinctly Mediterranean with plenty of fish and salad. If you’re in Marseille then make sure you try bouillabaisse (a fish stew) while in Nice try ratatouille, pissaladerie (the Nicois version of a pizza) and salade niçoise and then head to the market for a socca (a crêpe made from chickpea flour). And of course it can all be washed down by a glass of chilled Provençal rosé.

Corsica’s cuisine is often described as a blend of French and Italian. Fresh fish and seafood are abundant but Corsicans are also big meat-eaters so you will see wild boar, lamb and veal on most menus. Civet de sanglier (a hearty wild boar casserole) is perhaps Corsica’s signature dish and you will also see plenty of charcuterie platters. You will see chestnuts in numerous desserts including a gateau aux châtaignes, or alternatively try fiadone, a Corsican cheesecake made with brocciu and eggs. For a snack, pick up a packet of canistrelli biscuits.

When in the Alps, eat cheese! If you love cheese then you won’t be disappointed by the food on offer in the Alps. Local cheese varieties include Tomme de Savoie, Reblochon and Abondance to name a few. As well as on a cheese board you will find them in a number of dishes that mostly involved melted cheese, potatoes and charcuterie… Don’t miss tartiflette, raclette and fondue savoyarde! The former region of Auvergne also has a great selection of cheeses including Saint-Nectaire, Bleu d’Auvergne, Cantal, Salers and Fourme d’Ambert. The cuisine of this area is characterised by rustic and hearty dishes including truffade (a potato and cheese dish). One key element of Auvergne’s cuisine is the Puy lentil. These tasty green lentils have been grown on the volcanic slopes around Le Puy-en-Velay in Haute-Loire for more than 2,000 years and are a must-try either in a stew or salad.

There is so much to try in the former region of Burgundy it’s difficult to know where to start! A meal will often begin with gougères, a cheesy choux pastry ball, or escargots (snails) prepared with a garlic and parsley butter. Hearty, rich dishes are popular in Burgundy including boeuf bourguignon, a stew of beef slowly cooked in red wine with carrots, celery, onions and lardons, and coq au vin, chicken braised in red wine, lardons, mushrooms and garlic. A common accompaniment to salads and meat is Dijon mustard. Burgundy’s most famous cheese is Époisses or you could try creamy Soumaintrain, while in the former region of Franche-Comté the local cheeses include Comté, Mont d’Or and Morbier. Burgundy’s wines are world-famous but the less well-known vin de paille (straw wine) and vin jaune (yellow wine) from Franche-Comté are worth a try. This is also the area where absinthe originates from if you’re brave enough…

Obviously you can get any type of French food (or any other food for that matter) in Paris but make sure you don’t miss the amazing Parisian pâtisseries! Whether you head to one of the famous Paris boulangeries or try a small family boulangerie you won’t be disappointed by the tarte au citron, tarte aux fraises, éclairs and other French treats on offer! If you really feel like something special then indulge in a macaron or two from Pierre Hermé or Laudrée.

Where to buy the best baguette in Paris

10 expert tips for creating a heavenly French cheese board

French food delicacies you should try