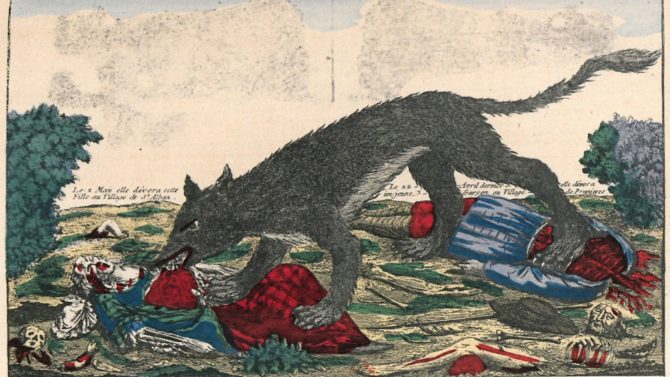 Legends, myths and stories abound in French culture and not all of them are pleasant. In the run-up to Halloween, we take a look at some of the more frightening legendary beasts and monsters of French folklore.

Horrific fatal attacks in the county of Gévaudan (roughly equivalent to today’s Lozère department) in the 18th century were blamed on an enormous beast which rumours claimed was a werewolf or an exotic monster. Its fame crossed borders until the royal army intervened. Several large dogs and wolves were killed but attacks on humans continued until a peasant called Jean Castel finally shot a large wolf in 1767. Fatal attacks ceased thereafter but the killings captured the country’s imagination, even to this day as the story inspired several modern films.

Hailing from Celtic mythology, this figure is said to be the servant of Death and was feared in Brittany. He is depicted as a skeleton, sometimes draped in a black cloak and holding a scythe, an arrow or a spear. Legends say he rides a wagon with creaking wheels at night to collect the souls of dead people. If you hear the wheels or see this sinister cart, it means you or a loved one will die soon.

This legendary beast haunted the marshes and riverbeds of the Rhône in Provence, especially between Arles and Avignon and on the banks of Tarascon. This reptilian monster is often described as part dragon, snake or crocodile with a lion’s head and a tortoise shell. It terrorised the town of Tarascon, devouring many inhabitants until a young woman, Marthe defeated the beast. Les Fêtes de la Tarasque are still celebrated today in this small town in Bouches-du-Rhône.

Spooky France: 13 of the most haunted places to visit

5 creepy locations to visit in Paris on Halloween

Also known as la malebête, this giant bear would eat young sherpherdesses and their flock of cows in the Vendée area. The story goes that a priest prayed for five days and managed to slip a rosary around the bear’s neck. He led the beast to the top of the church of Angles where the bear was turned to stone – you can still see the statue today! Unable to eat young women anymore, it is said the bear devours their beauty instead…

A cauchemar (nightmare) was long thought to be a creature that would come at night and sit on sleepers’ chests, stopping them from breathing correctly. In Occitanie, the creature was a female witch-like figure called Sarramauca. In Occitan language, sarramauca means “to tighten the chest/stomach” and refers to feelings of breathlessness and choking. Many deaths, especially of infants, were attributed to the Sarramauca and people tried similar remedies as those used to protect against witchcraft.

This beautiful but evil horse, pure white, would appear at night alongside tired travellers in the old Poitou area of western France. The horse would be ready to ride with a saddle and tempt the exhausted traveller to climb on and rest their legs, only to then throw off the rider either over a cliff, into a river or on the floor to be stamped. Either way, the rider would die, unless he paid a ransom for the ride: a medal of Saint Benoît or six coins marked with a cross.

7. le Croque-Mitaine, all over France

Children are often threatened with this frightening and evil creature to forbid them from going somewhere they shouldn’t for example. Croque-Mitaines hide in rivers or lakes and in the winter, they eat little children’s noses and fingers. This figure is present in popular fairytales all over France and has many different names.

Saint Nicolas in France (Father Christmas) is often associated with his opposite, le Père Fouettard. While Saint Nicolas, protector of the children, is celebrated on 6th December and ‘rewards’ good children with gifts and treats, le Père Fouettard punishes those who have misbehaved. The stories vary but he either leaves charcoal instead of sweets or beats children with a bag of coal or even a whip (leading to his name which means ‘Father whipper’). He’s depicted as a dishevelled, bearded old man in rags who carries a martinet.

Another maleficent creature, the voirloup is a man or a woman with a ‘dark soul’ who has committed the seven cardinal sins. They are possessed by Satan and, at midnight, transform themselves into animals, often wolves but also foxes, boars, goats or cats. They then spend the night roaming the forest, eating dogs or flock, lighting fires and generally frightening locals. They are mostly present in the Pays d’Othe, a hilly area in the Yonne and Aube departments.