“I just kept pedalling and I always made sure that I had chocolate!”: Food writer Felicity Cloake on her gastronomic Tour de France 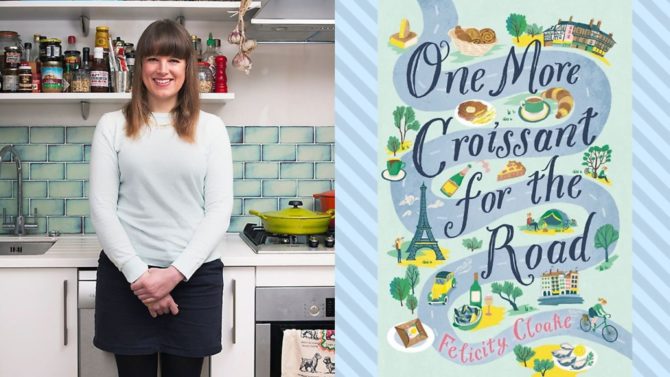 For her latest book, One More Croissant for the Road, Felicity Cloake embarked on a 2,300km odyssey across l’Hexagone, discovering (and re-discovering) some its most delicious dishes and meeting some fascinating foodies along the way. Here, she tells FRANCE Magazine about her incredible adventure.

FRANCE Magazine: One More Croissant for the Road is a lively love letter to French food – what inspired you to write it?

Felicity Cloake: It was a combination of things! I’ve always loved France. My mum and dad are massive Francophiles and we always went there on holiday when I was a child – they had a house down in the south for 10 years. I’ve always had that pull back to it and for a while, I’d go to more exotic places, but it’s always had a special place in my heart.

Then, in 2017, I went on a cycling trip with my friends from Saint-Malo down to Sète on the Mediterranean coast and it was just the most fun I’ve ever had on holiday. It also made me realise that even though I thought I knew France very well, I actually knew isolated bits of it, whereas when you’re travelling across somewhere you get a real sense of it as a whole country. I wanted to explore more of that and to try more obscure regional French cuisine.

By bike is such a great way to travel. It’s slow enough that, unlike a car, you can feel the land changing underneath your toes; sunflowers suddenly appear and you see the rooves suddenly go from slate to terracotta.

You mention France’s famously diverse regional dishes – what was your favourite regional speciality that you got to sample along the way?

That’s quite a hard question because I loved almost everything I ate! I think my favourite thing I ate – just because it was so unusual and showed me a different side of French cooking – was when I was down in Cassis. A friend recommended me this restaurant with a pasta speciality called macaronnade, which is actually from Sète, down the coast. It’s basically pasta with lots of little meatballs – the one I had had dried fruit in them and pine nuts. They were some sausages, too, and it had this thin, spicy tomato sauce, so it didn’t feel anything like French cooking to me. After I’d taken one bit, the waiter rushed over and said, “Oh, I forgot to tell you that it’s spicy!”, but it was really nothing for someone who likes chilli sauce as much as me!

I was just so surprised because it was a completely local dish, not Italian, but it was something that I’d never heard about before. When you think of the south coast of France, you think bouillabaisse and Provençal stuff, but there’s also this sort of Franco-Italian food too.

It seems like you were fond of pretty much everything, but was there anything that you tried that you weren’t a fan of?

The worst thing I had was when I was in Châlons-en-Champagne. In general, everyone was so nice – people honestly couldn’t have been kinder, for the most part – but there was an unfortunate incident with a grumpy waiter there. Everything was going fine until I ordered this pudding with mint ice cream… but when it arrived, it reeked of garlic! This wasn’t an experimental restaurant, either. I got my friend to try it, and she agreed it was garlicky. So I complained, as I assumed there’d been a mistake, but the waiter didn’t believe me and insisted on trying it. To his credit, he had a completely straight face and said: “No, that was mint!” It was a battle of wills. He said he’d take it back if I didn’t like it, but I said, “It’s not that I don’t like it (but I don’t like it)!” It was very funny – I would not recommend garlic ice cream with strawberries.

Also on this trip, I had a breakthrough with andouillette. I don’t know if It was because I’d just been in France for a very long time, but I had really good andouillette in Lyon. I finally saw the point of it and looked past the fact it smelt like a farmyard. It was at one of those real Lyon bouchons were basically everything is offal related, so it was in good company and wasn’t exactly set off against steak and chips! Everything on that table was some degree of entrail and we had also had quite a lot of red wine.

How did you manage to keep your motivation levels up during all that cycling?

I think I had some really bad luck – it felt like it at the time. I had to keep myself going by thinking, for a book, sometimes people – well, I do – enjoy reading about people who are having a bad time from the comfort of their armchair, so I was thinking, at least this will make quite good copy! But bits were really bleak. It was 2018 when I did the ride and the UK had this incredible heatwave. I was getting pictures of my dog sunbathing! Every single day for the first 3 weeks it rained – it was so unfair. There was a train strike two days a week, then my phone got water damaged. There were some quite low moments but I knew I had to be there and I’d given myself a fairly strict itinerary to meet people in various places. When you’re on your own I think it’s always easier because it’s just you, no-one’s talking about giving up. I just kept pedalling and I always made sure that I had chocolate! Another secret: always carry chocolate.

Back in the UK, do you have a favourite French chef?

There’s this guy called Guillaume who’s got a place in London called the Flying Frenchman. He’s a chef from Paris who makes all of his own charcuterie and lots of fresh sausages. He’s just started this restaurant up in Newington Green and he’s just brilliant. I just went into the restaurant and got talking because he’s got merguez on the menu. I love merguez and can’t understand why they aren’t more popular in this country – they’re really hard to get yet they’re such a French staple. Anyway, he’s got them on the menu and I just got talking to him. He does lots of mad things with sausages.

We can’t not talk about croissants – what’s the best ever croissant you’ve had in the UK?

There’s some quite good ones in London! My favourite one is from this little café bakery on Gray’s Inn Road near King’s Cross Station that’s not at all glamorous. The croissant is £1.10, I think, which I think is cheap for London. Of course, Yotam Ottolenghi does a really great croissant but I think it’s £3, which would raise a few eyebrows in France. I must say his croissants are quite large and very good, but anyway. This one is this bakery called Aux Pains de Papy and it’s run by these French guys with a tiny sit-in area. It’s not glamorous at all but it smells like a french boulangerie and it’s just really nice. Don’t expect glamour but they’re very good value for money.

Skiing in the Alps – love all of that mountain food.

I’ve got a bit of weakness for the ferry because it’s nostalgic. But I also love the train.

Can I have both?

One More Croissant for the Road is available in hardback now. The paperback version is released on 9 July.

Previous Article Escape to the Château: Dick and Angel launch Dare to Do It at Home competition
Next Article Expat pâtissière in Versailles hosts bake-alongs on Instagram