First published: 4 May 2020 by Brigitte Nicolas 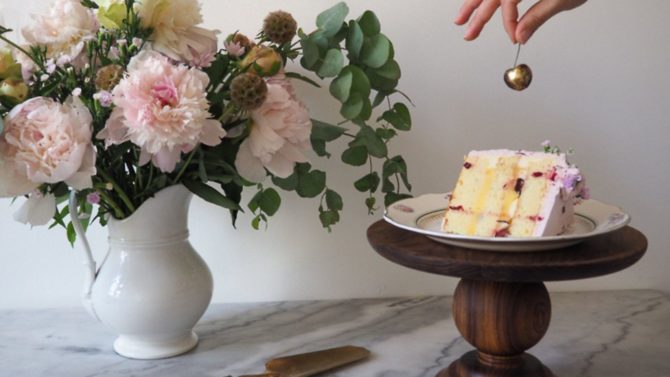 Many of us are pulling out sieves and whisks to have bit of fun baking during these difficult times. For some that means learning the skills from scratch while others are returning to a lifelong hobby. Before the lockdown we interviewed Texas-born Molly Wilkinson who trained in French pastry at Cordon Bleu Paris. She loves sharing her knowledge of baking through classes and Instagram bake-alongs from her apartment in Versailles and is currently running virtual classes online. This is how her passion for French pâtisserie and flair for decoration took her from Dallas to Île-de-France.

Molly, who had a love of baking since she was a child watching her mum make cookies at home, had always dreamt of culinary school and after a seven-year career in digital marketing it was this passion for baking that took her, not just to France, but to Paris to study pastry at the prestigious Cordon Bleu and led to her running her own pastry workshops.

Learning from the best

“I decided to go to the Cordon Bleu simply because it’s located in France and I love Julia Child who went there. I told myself: ‘you know what, if you are going to study French pastry why not do it in France?’” says Molly. A sentiment that many others evidently agreed with: “The students were very international,” says Molly. “There was actually only one French person in our class,” she says, also explaining that there had been a live English translator helping the class traverse the language barrier. “It was a massive change,” she says. “One that was very exciting and it took a lot of preparation. It took about a year of research, planning and saving.” Once enrolled, Molly and her peers attended a mix of demonstration-based classes and practical sessions. The Paris culinary school’s standards of excellence and attention to detail led to some challenging moments for Molly. “We did a month-long session of pulled sugar,” Molly recalls. “That’s molten hot sugar that you’re forming into roses or you’re pouring into moulds. We did that in August with absolutely no air-conditioning. They told us to get rubber dish gloves that you use to wash the dishes, to protect our hands. We were in our full uniform. They checked every day to make sure that you had your neck tie on and your socks, and everything tucked in and tied appropriately. You would leave with beads of sweat just dripping down your face,” she says.

Nevertheless, Molly describes her year at the Cordon Bleu as one of the best of her life, which she followed up with a three month internship at Parisian pâtisserie La Fabrique à Gâteaux. After this, however, she had to head home as her temporary visa had run out. “I stayed up until four days before my visa expired and I feel like they had to pretty much drag me out of France because I had really fallen in love with it,” she says. With the first leg of her French adventure completed and her pâtisserie skills mastered, Molly’s plan was set to make France her home. After only a year back in the US she returned to France intent on finding a job. “I went to every single bakery that I could find, I walked around with my CV and I ended up falling upon this very cute cooking school in Paris called La Cuisine and they were looking for someone, so I started with them a couple of months later,” Molly says.

Having been in France for four years, including a year in Strasbourg, Molly now lives in an apartment in Versailles with her French boyfriend François who shares a love of food. “I would call him super gourmand. I thought that I was into food before and then all of a sudden when I met him it was this whirlwind of additional French food influence,” she says. “For a while, every Friday when he came home from work I was trying a new French classic; boeuf bourguignon, coq au vin etc. He was the one that got me into the routine of going to the market every Saturday morning.” François was also the one who found the classic Versailles apartment in which Molly now holds her pastry classes. “He looked at about 10 to 14 places and then he walked into this one and saw the room, saw the cabinets that it has on one side of the room and the window that it has on the other side, and said ‘this is perfect’,” she says.

Molly regularly holds pastry workshops where she teaches the skills she has acquired in a way that aims to be accessible to whoever wants to give it a go. “I think a lot of people are scared of French pastry because is does seem really difficult. But, when you actually break it down, and when you get something that is doable and fun, I think a lot of people walk away and think ‘oh I can do that, it isn’t that hard’,” she explains. “It’s really about teaching pastry as something where you are using all of your senses. You use your sense of touch to know when something is done, for example, and people aren’t used to baking like that.”

Molly travels all over France to bake pastries for events, making sure never to leave her trusted tools behind. “I travel with a bag of piping tips, about 20 different kinds; with my thermometer because that’s really important when you are making pastry, and with pastry bags. “I also take a zester as a lot of places don’t have one, or maybe they do and it’s a bit dull and so it’s nice to bring my own. Lustre dust is fantastic as well – you shake it on at the end and it gives that perfect little finishing glimmer to some things,” she says.

With all her knowledge of French pâtisserie, Molly hasn’t forgotten her roots. “I take all of that French base I learnt in school and then I apply some American elements, and so it becomes this really fantastic fun collaboration.”

Eat with your eyes

Her beautiful designs certainly demonstrate an ability to think creatively and to venture away from very rigid traditional recipes, as she explains: “I think about decorations a little bit differently than other people, because it is very fanciful, fun and playful. You do look and eat first with your eyes. I think that there’s a lot of certain conceptions around what makes a beautiful dessert. “For a layered cake, a lot of people think that the sides have to be perfectly smooth, but I kind of go the other way and I say it doesn’t have to be perfectly smooth, it should just be an expression of your creativity. It’s a moment for you to have fun with something that you are making and be artistic.”

Expressing creativity is something Molly also encourages her followers on Instagram to do, where, for those who aren’t able to travel to Versailles, she does live ‘bake-alongs’. “They are surprise bake-alongs,” says Molly. “It means that people don’t know what they are making until they are actually gathered live on Instagram. I provide the list of ingredients and the equipment needed at least a week in advance and then on the day I reveal the recipe and it’s a live baking session. It is great because people can comment and ask questions. I focus on really great recipes but then I give lots of tips for decorations too, and afterwards I show people’s creations. It is so cool to see how people translate the one recipe through their decoration,” she says.

Previous Article “I just kept pedalling and I always made sure that I had chocolate!”: Food writer Felicity Cloake on her gastronomic Tour de France
Next Article 19 ways you could save money if you live in France