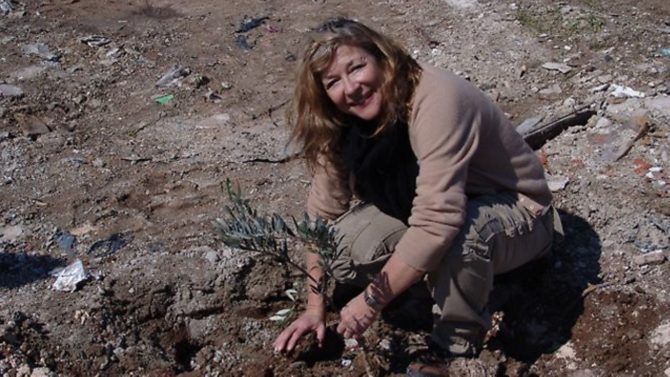 There is no hesitation in Carol Drinkwater’s voice when she replies “everything” to that age-old question: “What do you love about your life in France?” Nor does she backtrack on that answer.

The Irish-born actress and author splits her time between a property outside Paris and an olive farm overlooking the bay of Cannes. Art and elegance in Paris, outdoor relaxation and olive pressing in Provence – Carol certainly enjoys the very best of French life.

While ending up in France was not so unlikely, owning a farm where she grows her own vegetables and produces organic olive oil was a little more surprising, even to her. “I come from a farming family in Ireland but my mum fled from all that,” Carol remembers. “She just wanted high heels, the London life and glitter. She’d say ‘I can’t believe you’ve gone back to everything I fled from’. She quite rightly said it’s obviously in my genes.”

Though she travelled to France as a child with her parents, it was in her early 20s while backpacking around the Mediterranean that Carol truly discovered la vie en France. “A little later, Peter Brook invited me to join his theatre company in Paris so I came over and worked with him,” she says. “It was a wonderful opportunity for me to discover the artistic community in Paris.”

Her memories of the south, however, were cemented much earlier on and she recalls thinking how beautiful and romantic the area was. The attraction stayed with her and, in the mid 1980s, she and her French husband Michel Noll bought a derelict house above Cannes. “We saw the house in April 1985 but we actually got the deal through in March 1986,” she explains. “The place was a ruin at that stage; we couldn’t have lived in it permanently. We slept on mattresses in the sitting room, cooked faux-filets on the log fire… it was romantic. We had absolutely nothing, no money; we spent every centime to get the place. For a few years it stayed like that.”

Carol and Michel used the house in the south of France as their escape to the sunshine and they still do today. In 2001, they bought a large seven-bedroom property located between Paris and Reims, on Champagne’s doorstep. The Mad Old Château, Carol calls it; “It’s still a semi-wreck!” she says.

For the first 10 years of owning their property in the south, Carol was in London and Michel in Paris, so progress was slow. They did rudimentary work and had a temporary kitchen. “The first thing we did was the swimming pool,” she explains. “We discovered it had no system to it and it was just literally a big basin in the ground. So we had to get everything fitted for that, which was a major expense for us at that stage. But it was one of our main priorities because we were down there mostly in the summer and we could sort of camp indoors. But we had the pool and the barbecue and that was enough.”

Soon, the glorious weather, beautiful landscape and general way of life inspired Carol and the couple had to think about making the house a home where she could work properly. Walking down to the local village simply to place a telephone call was becoming ludicrous so they installed a telephone line and washing machine, created four bedrooms, and put in a library and an office for Carol.

While they knew they would never be there full time, Carol admits that they went down as often as they could and she never truly wanted to leave, particularly as the sun, the sea and the food quickly became her muses. “I’d always wanted to write and it seemed the ideal place to do it,” she says. “I wanted a place where I could jump in the swimming pool or look out at the sea. I found that I could write there. I still feel very comfortable writing there; it’s a very inspirational place.”

Michel being French, was able to deal with the notoriously difficult French bureaucracy which Carol had no patience for. Carol’s schoolgirl French could only get her so far so she took herself to a language course during the first summer they were down there. “I’m very glad that I did. It was amazing,” she recalls. “I went to join the French group and they put me in intermediate level. When I went in, there was a speaking bit and, at the time, my vocabulary included things like ‘hardware stores’ or ‘how to mend a swimming pool’ and this woman said: ‘How come you know all this vocabulary? Most people know ‘can I buy a dress?’ or ‘where’s the bakery?’’ and there I was talking about trying to renovate a whole house!”

Read other stories from expats

They used local artisans and, thanks to the olive trees, Carol was soon able to exchange with farmers too. They integrated into the community through these artisans and farmers and Carol reckons they saved quite a bit of money because they were not seen as tourists.

“There are times when I miss my community of artists,” Carol explains. “I miss the camaraderie that I have with the English people I knew from drama school. But I’m delighted that France is such a European-minded country; I think that’s very important.”

Carol also feels part of a community in Paris and was particularly touched by the solidarity Parisians demonstrated after the terrorist attacks in November 2015. Her latest book, The Lost Girl, takes place in Paris after a terrorist attack and is an emotional tribute to the victims of the Paris attacks. “I went to Paris a few weeks later and went straight to the Bataclan. I walked all the way to La République and I knew I had to write something about it. The sense of community of France coming together, and Paris particularly… it was really extraordinary. It was very powerful.”

Carol admires France’s love and support for the arts but she says she feels most at home in their house in Provence, especially outside, in their garden. It was while doing preliminary work on the farmhouse’s garden and hacking back overgrowth after they bought the property that the couple discovered a few olive trees. Carol had always been fascinated by nature and the outdoors, particularly the landscapes of the Mediterranean. Her best-selling Olive trilogy is, after all, based on her and Michel’s story of how they bought their Provençal house, renovated it and began farming olives. But her interest in olive trees ran deeper than fiction.

“I had to learn everything about olive farming obviously,” she says. “Part of that came from my interest in learning about the olive tree, the culture of it, while travelling around in the Mediterranean. I began to learn about the farming methods, what works and what doesn’t so I’ve become a little bit of an expert in a very small way. I’m fascinated, I absolutely love it. The olive tree is a magical, mystical tree.”

Once the seed was planted, there was no going back. She and Michel built a greenhouse and began planting vegetables, fruit trees and more olive trees. “We just planted the trees and I watered them, it was that simple!” she laughs. “Things grow so easily down there. I’m still amazed when I go around the garden and see huge great fruits. I’m like a child at Christmas with baubles on the tree. I still can’t get over the fact that these are growing from the earth. I even planted an avocado stone, put it in the greenhouse that we built and it grew! It’s now with an oak tree in the garden and we have avocados, really delicious avocados. And now there’s another one growing!”

Today, the farm is completely organic and Carol and Michel produce roughly 200 litres of olive oil a year, which they happily give to friends and use themselves. Fruit trees thrive in the garden; Carol makes fresh juice out of the agrumes she has – clementines, lemons, oranges – but peaches and apricots also grow there. “We have all that and I feel blessed that we do,” she says. “We are completely organic; we pick everything directly from the trees and from the garden.”

Cannes may be just 15 minutes down the hill, but Carol says she’s perfectly happy enjoying their home which is ideal for outdoor living, occasionally with guests. “We’re set back and private and that’s lovely,” she says.

What would her perfect day sound like? “I would get out of bed early, write 1,500 words that I really felt would stay in the book and take me forward. It would be a beautiful sunny day, so I’d go swimming or go for a walk into the hills and then enjoy a wonderful dinner in the grounds with Michel and friends maybe. Quite simple really.”

Carol’s latest novel The Lost Girl is out on paperback on 8 March (£7.99, Michael Joseph, Penguin)

Previous Article Escape to the Château: Dick and Angel’s tips on renovating in France
Next Article Quiz: How much do you know about France?