Escape to the Château: Dick and Angel’s tips on renovating in France 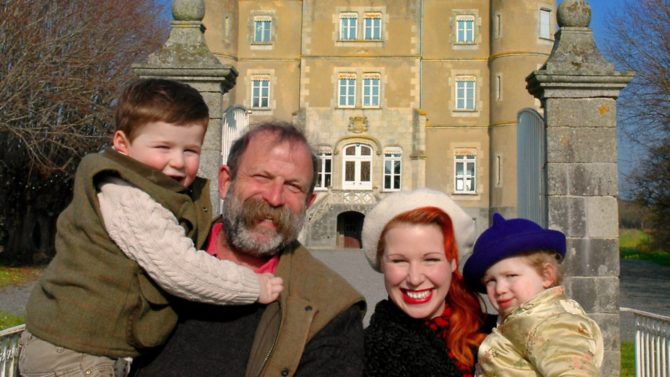 Stars of the TV show Escape to the Château, Dick Strawbridge and Angel Adoree reveal their tips and the lessons they learnt when renovating their French château

Renovating any sizeable property is certainly not a job for the faint-hearted, as anyone who has watched the Channel 4 programme Escape to the Château will know. The programme follows happy-go-lucky Dick and Angel who, in 2015 swapped their east London flat for an abandoned 19th-century château in Pays-de-la-Loire.

With no electricity, water or heating, restoring the château to its former glory hasn’t exactly been the stuff of fairytales. But bringing the property back to life has been a dream come true for Dick and Angel, who tackled the renovation all guns blazing, spending every spare morning, noon and night fitting heating systems, knocking down walls and trawling local brocantes.

Now that the château is operating as a boutique wedding venue, you could say they have come out the other side, although they admit the finish line is still some more blood, sweat and tears away. Here are just some of the things that Dick and Angel have learnt along the way…

1. Know what to look out for

Dick: We looked at roofs all the way through. With a big property, the roof can be expensive, especially if it has five floors like ours. Another thing is, make sure you get all the information from the seller. We had 350 pages of briefing on the property – 30 of those were about asbestos and it concluded that there were a couple of asbestos tiles on an outbuilding. The rest of it wasn’t really relevant, but we had to cut the wheat from the chaff and realise that some of the things that scare you are just pretty normal for an old building. You can get away with anything; it’s just how much work you’re prepared to put into it. Quite simply, the heart’s got to lead you but the head has to be there for the decisions.

Angel: Also, ask if anyone else has a claim on your land, which is quite a big thing in France. But to be honest, the first phase aside, if everything else is right, and you’re in love with it, you just have to make it work.

Dick and Angel: We bought a château in the French countryside – and it was a bargain!

Behind the scenes on series 2 of Escape to the Château

Angel: There was a lot of discussion between us before Dick could actually start the work. You need to ask questions like are you just going to live in the property? How many toilets do you need? Where are they going to be? How many bedrooms are you going to have? How is the house going to be structured?

Angel: Dick has a saying, “You only eat a bite of an elephant at a time”. At the start, we only had a very temporary kitchen with one of those little gas hobs. It was small but it was fine because you know you’re going to get there eventually.

4. Prioritise if you have to

Dick: The thing is, this is a business for us. It’s not a holiday home; as part of the business plan, we knew we had to get to the stage where we could make some revenue from it. So the honeymoon suite, as we call it, had to be finished and lovely so we could start advertising and people could come to us. The downstairs reception room had to be done. It’s only this year that we’ve actually done ours and the children’s bedrooms because the first bit was getting to the stage where we could make some money – I think that’s just common sense.

Dick and Angel: hosting weddings at our French château

5. Be realistic with deadlines

Dick: To achieve deadlines, you have to be realistic. Sometimes it can take up to 28 days to get something delivered to France, because they don’t hold the same stock as in the UK. So we find it easier in some cases, to put in an order in the UK, especially when we have a deadline looming.

Angel: Deadlines are good as long as they are achievable. Otherwise, things can roll on, I mean especially in France, but it’s important not to be disheartened.

Dick: There’s a lot of red tape, but actually, the red tape is very different from a new-build. In the village where we are, people will spend more on a brand new box house than they do on an old house, so all of the legislation is geared towards the new style. You also have to get your sewage right, which SPANC come along to inspect, so we used a French contractor for that. Things like that, you have to use the French, but when it comes to other elements of a renovation, it’s common sense.

7. Never forget why you’re doing this

Dick: You mustn’t lose sight of why you’re over here. Today our kids, Dorothy and Arthur, will have a two-and-a-half-hour lunch break during which time they’ll have a three-course meal. We can’t do that yet because we’re still working too hard, but apparently the expats have been seduced to the dark side and are having long lunch breaks. That’s what happens. You always have to bear in mind that’s what you’re aiming for. This is much more about lifestyle choices.

8. Respect the building’s past life

Dick: Nobody cares about the château more than us. There are a lot of derelict châteaux with nothing happening. In the fourth series, which comes out in March 2018, we look at the old maps of the area, to see what shape it was, so we can understand what’s on the ground, what our buildings are doing. We look at it because actually we care. We’re caretakers here. Arthur and Dorothy will hopefully be caretakers after us, their families after them. And that’s a very different mindset. We have to try and bring it back to what we want.

Angel: In the fourth series, we take out a granite floor from the stables. We could have just covered it in concrete because it took a long time to do, but we are using those stones; they’re going to be re-laid again. Anything that is original here, we try and bring back to life, we don’t just rip it out and put something new in. That’s the art.

7 of the best brocantes in France

Ways to save money when renovating in France

9. Hire labourers for jobs, not time

Dick: With their two-hour lunch break, artisans do a shorter day – that’s for sure – so we never dream of doing day rates; we’d always contract for a job. You do kiss frogs before you get your little prince. It’s something to be aware of.

Dick: I still say anyone can do what we’re doing. The internet is very powerful. There’s lots of ways of learning stuff and I think you just have to be an intelligent customer nowadays. People can take you to the cleaners if you don’t know what you’re doing or what you’re talking about.

Angel: You’ve got no excuse not to read about things now because everything is available for you to look at and at least try and understand.

11. Shop around to keep costs down

Angel: Source things in the UK to keep the costs down. We get a lot of our stuff there, like paint, which is very, very expensive in France. There’s a formula: you’ve either got time or money, and if you don’t have that much money, you need to invest your time. For some people, that’s just going to the amazing brocantes and vide-greniers. But it takes time to go and buy things. We do invest that time because actually, you don’t just find great things, you find amazing things!

Angel: The most difficult thing through the process has been agreeing with Dick.

Dick: We’re both quite headstrong. There’s only one right answer and that’s always Angela’s answer.

Angel: Dick does all the clever stuff; I’m not going to lie. I take all the credit for how lovely it looks.

Dick: If it was left to me, everything would probably be magnolia.

Angel: You can’t live on regrets. There are definitely things that we might have done differently, but I can’t even give you an example because they’re so irrelevant. It’s all part of the process. You learn as much as you can as quick as you can.

Dick: We keep pinching ourselves. Every evening, we try to have a drink on the steps in the sunshine and just soak it all up.

Angel: It’s far too easy to be running around doing stuff. We try to take that moment out, look around us, smile and think how very lucky we are.

Escape to the Château: DIY where Dick and Angel help fellow Brits renovate their own French châteaux starts on Channel 4 at 4pm on Monday 9 April.

7 questions to ask yourself before starting a renovation project

Previous Article What is taxe d’habitation and do I have to pay it?
Next Article Why Carol Drinkwater loves living in France