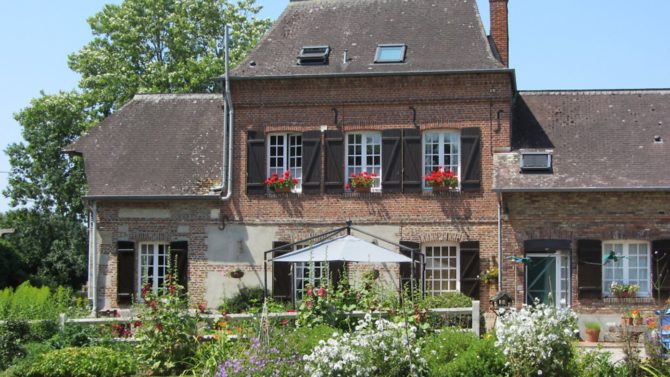 Normandy is a popular areas with Brits because of its close proximity to the UK but what is it really like to live there?

In 2003 Lynn and Duncan Birtles moved from Kent to a small village in Seine-Maritime where they run a B&B in a former watermill.

We lived near Tonbridge in Kent. Duncan was a vehicle inspector and I worked for the University of Kent as an executive officer. While working for the university, I spent five years studying part-time for a degree in French. After I graduated I did some teaching for the adult education service and the university.

What attracted you to Seine-Maritime – did you know the area well?

In 1984 the university organised a trip to visit three gardens in Upper Normandy (Giverny, Bois des Moutiers and Le Vasterival) and this was my first introduction to this beautiful area and its wonderful gardens. Being Francophiles, we had considered the idea of a holiday home in France and started looking around. Meanwhile, I was asked by a colleague to assist her with a day school on Normandy. Needing material and photos to illustrate my lectures, we came to Normandy and discovered more. We loved the peaceful green countryside and rolling hills. It also had the advantage of being easy to reach for weekends and short stays. We therefore decided to focus our search on this area.

What attracted you to the watermill?

I have always had a hankering to live near water, be it the sea, a lake or a river, and it was thus that we found our watermill, in the small village of Ste-Beuve-en-Rivière. Initially we went to view it out of curiosity, rather than with a serious intent, as it seemed too large for a holiday home. But once here, we rapidly fell in love with the mill and its idyllic location; and also saw its enormous potential. Our favourite TV programme at the time was No Going Back. We would see people with few French skills but big dreams making a success of their lives abroad and we thought that with our combined skills – my French and administrative experience, plus Duncan’s marvellously practical engineering skills – we could do it too! So we took a deep breath, gave up our jobs, home, left family and our life in Kent to start a new venture – with some trepidation. We found the mill in August 2003 and moved in the following November.

Did the watermill need much renovation work?

Fortunately most of the work was cosmetic and manageable, and by the time we opened up for business in April 2004, we had installed shower rooms and redecorated the bedrooms and main living area. Gradually over the years we have replaced a chicken barn with a covered area resembling a lavoir for outdoor meals, built on a conservatory for breakfasts, and created an office and laundry room from a garage. Duncan is never happier than when he has a project on the go, and our mill has provided him with far more opportunities than we could ever have found in the UK. Apart from the house, we have a large vegetable garden, from which we supply the salads, fruit and vegetables for table d’hôte meals; an apple orchard which enables us to make cider and calvados; a woodland bordered by the river, full of snowdrops in winter and wild strawberries in summer.

Things to consider before buying a renovaiton project in France

This is why we love living in France all year-round

Where do your guests come from?

Many of our clients have become regular visitors and good friends that we look forward to seeing every year, and some several times a year. They come from everywhere: the UK, France, Germany, Holland, Belgium, US, Australia and New Zealand, to mention a few.

The seasons are similar to those in the south of England, but with the vagaries of the climate nowadays, we are not at all sure what a ‘typical’ winter or summer is here. Some winters have been mild, some wet, some cold with snow, some windy. Summers too vary from year to year. The locals claim that you can get all four seasons in one day…

What do you most enjoy about living in Seine-Maritime?

What we particularly like about life here is the tranquillity, the freedom from the stress of trying to get about on congested roads, the pleasure of driving on empty roads through lovely countryside, the many beautiful gardens, châteaux and villages to visit, and the coast with its cliffs and attractive ports.

Do you have a favourite market in the local area?

There are many – in fact, one somewhere most days. Our nearest is on a Saturday morning in Neufchâtel-en-Bray. There is also a very good all-day market in Dieppe, about 40 minutes’ drive from here.

Can you recommend a good local restaurant(s)?

There are many restaurants in the area and we recommend Les Airelles, a hotel in Neufchâtel, and the Lion d’Or at Londinières. Also Le 235 in Forges-lesEaux. For a special treat there is the Les Voiles d’Or in Dieppe which has a Michelin star for its seafood.

What is your favourite place to visit?

Our favourite places to visit are Varengeville with the Bois des Moutiers and a wonderful linen shop called Lin et l’autre. The Hôtel de la Terrasse is a good place to eat and has a view of the sea. We also like Veules-les-Roses which boasts the shortest river in France at 1.1km. It has a delightful walk from the springs to the sea. In June there is a rose festival which is worth a visit. Étretat with its ‘elephant trunk’ cliff, and Rouen are not far either. Apart from Les Moutiers, our favourite gardens are Jardin Agapanthe and Le Jardin des Sculptures at Château de Bois-Guilbert.

Did anything surprise you about living here?

The only aspect that did surprise us here was the discovery of just how many places there are to visit and enjoy.

Have you found it easy to get involved in local clubs or associations?

When we first came, we started a ‘Brits’ night’ once a week. This enabled us to meet many Brits who lived here, or had holiday houses. These contacts provided Duncan with a lot of work while we were getting our business off the ground, and a lot of friends in a supportive network. We also joined Gîtes de France and they and the other members were a great source of advice and help. We have been on several well-organised excursions to other parts of France with them. I belong to a walking group of mixed French and British locals that meets once a week. We take it in turns to host the afternoon, providing tea, cakes and Rummikub. I nicknamed it ‘the cake walkers’ group’, as we often spend more time enjoying delicious home-made cakes than walking! For walkers, there are many marked trails which can go straight along the Avenue Verte (a former railway line) that runs from Dieppe to Paris; plus many marked circuits through forest and countryside. The Avenue Verte is very popular with cyclists. There is an active social committee in the village and we try to attend as many events as business will allow. Three times a year we attend a village gathering at the church war memorial to remember those who gave their lives in the two world wars.

A year in my garden in Normandy

Previous Article Will 2017 be a good year for the French property market?
Next Article Auxerre: an insider’s guide