We host weddings at our French château 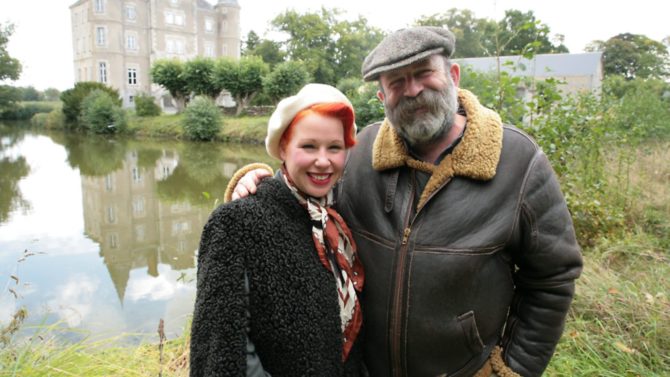 As the third series of Escape to the Château starts in the UK, Dick and Angel take us behind the scenes of the TV series and reveal why hosting weddings at their French château is a dream come true

It’s been two-and-a-half years since Dick and Angel swapped their two-bed London flat for a 19th-century château in Pays-de-la-Loire and a lot has happened since then. With 20 of the château’s 45 rooms transformed, the pair have been busy hosting wedding parties and food weekends, and this weekend (Sunday 24 September) the family return to our screens for a third three-part series of Escape to the Château. Before the series starts, they tell us why they’ve got some way to go before they reach their happily ever after…

We last saw you on our screens at Christmastime last year. What have you been up to since?

We can’t give too much away as you’ll have to watch series three, but we have been looking at the future of the château, as a home and a business. We just had our first fully operational year of wedding and events which has kept us suitably occupied! We finally got around to doing up the Strawbridge Suite and Dick’s been getting green fingered in the walled garden!

What part of the château are you most pleased with?

Every part has its own, unique charm. Dick would probably pick the downstairs family kitchen. I would probably pick the wallpaper museum. However, all of us, including the children, totally love the new Strawbridge Suite. After two years of living out of a suitcase it’s been a real treat to have a gorgeous private space we can all relax and enjoy spending time in.

What have you learnt from the whole project?

You must be in love with it!

Is there much work left to be done to the château?

There’s probably a third left to do in château, but we haven’t tackled big jobs like re-doing our windows and a new roof. There are so many amazing outbuildings with potential for renovation – one of which you’ll see in the new series. Needless to say, we’ll be busy for some time to come!

How would you spend your perfect day at home?

Breakfast with the family with eggs from our chickens, sausages from our pigs and going on adventures with the kids in the garden.

How have Arthur and Dorothy settled into life in France?

They were both so young when we moved here that they don’t know any different. They’ve settled in really well at school and are very happy children.

Read more about Dick and Angel

We bought a château in the French countryside

A fairy tale in the Loire

What is your favourite thing about living in France?

The ability to have space and to make our home our business so the children can be with us as much as possible. We could never have afforded the space in the UK.

Was running a wedding venue part of the original plan?

Always. Angel’s background is in hospitality and she ran a successful events business in London for many years. The château is the perfect setting for weddings; it’s a fairy-tale venue and we love creating a special experience for our guests.

Can you tell us what a typical wedding day at Château-de-la-Motte Husson is like?

Busy! Endless drinking and eating all day whilst celebrating love!

Why do you think couples choose Château-de-la-Motte Husson for their big day?

Partly because it’s a fairly-tale château with the turrets, moat, orangery and beautiful French countryside, and partly because we both have so much experience between us. Our clients trust us – that makes a huge difference.

How much planning is involved in bringing the weddings together?

It’s normally a whole year of planning. Dick leads the food side, tastings etc., and Angel looks after the running of the day and everything creative from the styling, flowers, buttonholes, favours, and general look and feel of the day.

What is your favourite part about hosting weddings?

The ceremony! By the time the wedding day comes round, we’ve got to know the couple really well and Angel always cries!

Is there any wedding that particularly stands out for any reason?

They have all had their charm and memorable moments – it’s very hard to single one out. Charlotte and Richard’s wedding last year was very special as it was our first (except our own) and such a test on the château. After their wedding we knew we had something special and now at the end of the season we can sit back and digest. It’s been an incredible year!

What do you wish you had known two and a half years ago when you bought the property?

What can we expect from the third series of Escape to the Château?

Now if we told you, we’d have to kill you!

Have a look at Château-de-la-Motte Husson

Previous Article Why I decided to apply for French citizenship
Next Article 12 reasons to buy the October 2017 issue of Living France!