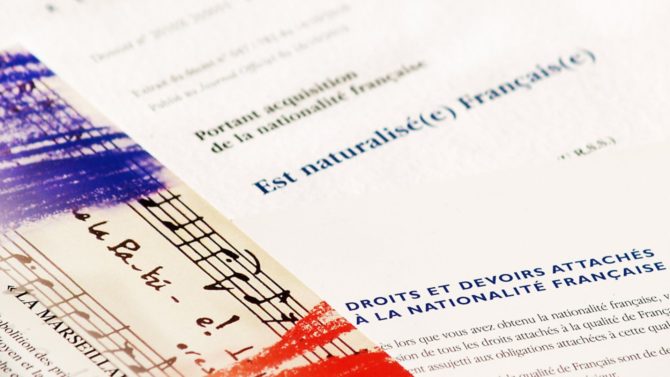 After living in France for 30 years, Charles Timoney decided to apply to become a French citizen. Find out why and his experience of the application process

Even after spending the past 30 years in France, and despite my wife’s regular encouragement for me to do so, I have never felt the need to apply for French nationality. I have always replied that doing so would be long and complicated and would very probably change little: I live, work, pay taxes, have medical cover and the prospect of a pension just like a French bloke.

What’s more, apart from the possibility of voting in national elections, could I want? All this changed with the EU referendum. With it came the likelihood that my life in France, post-Brexit, would be easier if I became French. It was time to act.

The first step was to visit the sous-préfecture – the second-tier county hall of the department of Yvelines where we live. In the hope of not having to queue for too long (if anything sums up my indelible British naivety it is an expectation that there was going to be a queue), we arrived outside the gate 15 minutes early to be faced by a scattered group of some 30 people. There was a large friendly notice suggesting that people wait in line along the fence to the left. Everyone was standing anywhere but near the fence having either not read the notice, not understood it because it was in French, or being from a culture in which queues form no part. Or, most likely, all three.

The gate was opened by a smiling girl who greeted the group collectively with a warm “Bonjour à tous”. We were among the few who replied. In the brief but intense pushing-and-shoving contest which followed the gate opening, we somehow managed to lose five places in the queue. Once inside we quickly spotted the small ‘Demande de naturalisation française’ – applications for French nationality – sign that pointed away from the main hall.

Galloping towards a side room, we overtook a few stragglers on the home stretch to a ticket machine which, when pressed, issued us with a number. Ticket in hand, there was nothing to do but take a seat, let the adrenaline rush subside and just wait for our number to appear on the wall display.

Some while later – I have no real idea how long it was, but as whiles go, it was a long one – our number came up and we were called to a window. There, we explained to the charming young woman behind the armoured glass that I had come to apply for French nationality, based on the fact that my wife is French and, more importantly, that I am married to her.

At this, the woman, whose badge showed her to be called Claire, pushed up her sleeves, looked appraisingly at the pile of neatly labelled plastic files which I had carefully spent the previous eight weeks preparing, and said “Right, let’s see if you have everything”.

Claire checked the original and two copies of my passport, my wife’s passport and our respective birth certificates. So far, so good. Then we hit a bump. “Certified translation of your birth certificate?” she asked. “Comment?” What? But that wasn’t on the list!

At this, Claire pointed out, most kindly, that anyone would know that a French translation of a foreign-language birth certificate would be required – how else would anyone know what it says? I tried arguing that mine is in English – the universal language – and, for good measure, that I was born in Oxford, that most famous and trustworthy of cities, but to no avail.

“Let’s carry on,” Claire continued, “and see if you have got everything else. Marriage certificate?” And here we come to one of the peculiarities of French bureaucracy. In order to be acceptable, marriage certificates, like French birth certificates, have to have been issued within the preceding three months.

Whenever you have to provide one, you contact the mairie of the town where you were born or were married and request the certificate you need. Inexplicably, however, the document you receive will be identical to the one which was issued at the time of the birth or wedding, or at the time you last needed one, the only visible difference being that it will have a recent date stamp in the corner.

The certificates are issued free of charge so there is no clear reason why a recent, date-stamped certificate should be considered acceptable while an identical, but older one, is not. No French person I have asked finds this odd at all.

Claire carried on. “Parents’ birth certificates?” I had actually found these in an old suitcase a week or so earlier. Unfortunately, I hadn’t had them translated (it wasn’t on the list!). Claire had clearly softened since our meeting started, because she said, “Puisque vous avez une tête sympa…” (“because you have a nice face” – it’s been a while since anyone last said that) I could fill in a form where I just declare ‘sur l’honneur’ their dates and places of birth. That would save me having to pay further translation costs. To this, I agreed readily. But of course another bump was looming.

“Rent book?” I explained that we own our house and produced the bills for annual rates and local taxes, made out in our names and address. These, taken together, show unequivocally that we own the house in question. At this, Claire scoffed openly. It is painful to be scoffed at by someone who has only recently said that you have a nice face.

“That’s all very well but we obviously need to see the original deeds to the house.” My wife and I stared at each other in confusion. We must have such a document somewhere but had no idea where it might be. Claire finished her list by checking our tax returns for the previous three years.

On our second visit, two weeks later, we arrived 45 minutes early to find just six people waiting outside in the cold. By the time we got inside, however, I was eleventh in the queue.

Once back with Claire, I handed over the certified translation I had prepared, along with the deeds to the house which had been found in a dusty box file. “C’est parfait!” she declared, stamping a form with the words dossier complet and handing it to us.

Unfortunately, she went on to observe that it was unfortunate that we had returned this particular week of all weeks, because her colleagues who formally receive applications for naturalisation were all away on a course. Keen to avoid coming back yet again, I asked whether I couldn’t just hand the file to her. Sadly not. It would seem procedures are procedures, even in France.

Back for a third time…

On visit number three we arrived an hour early to find ourselves second in the queue behind the Polish man who had been there since 6am that morning. The process of handing in the file took less than 20 minutes, the time spent passing the same documents and copies from my plastic sleeves one by one, this time to the charming

Catherine. I have to say that all the staff members we encountered at the sous-préfecture were charming and friendly. (This is unusual enough for French fonctionnaires to deserve a mention here). Having handed everything over, we were given an appointment for a formal interview two weeks later.

This time, there was no need to queue in the cold or take a number, and breezing past the huddled masses clutching their tickets was heady stuff indeed. Once in her office Catherine asked us about our education and employment histories, our social activities and our friends, all with a view to establishing whether our marriage is real or a sham for the purposes of naturalisation.

To my relief, it appeared that she didn’t suspect a sham for she presented me with a formal receipt signed by the head of the sous-préfecture himself, which showed that the formal part of the application was in order. But there was more to come.

An interview with the police

The following day my wife rang me at work, somewhat shaken, because three huge policemen had just rung the doorbell and handed her an envelope with the word convocation on it. This means ‘summons’ in English.

Despite the title, it turned out to be nothing more serious than an invitation for us both to attend an interview at the local police station in order to answer yet further questions about my application for French nationality.

We were received by a charming (yet again) young policewoman in a disproportionally huge blue sweater (it seems that she may have been wearing a stab vest underneath it) who asked us numerous questions about where we had lived since we got married all those years ago, and, somewhat to our surprise, whether we came from a monogamous or polygamous culture. I tried to make her laugh, wondering whether it wasn’t too late to become polygamous, but weak humour and police interviews clearly don’t go together.

Moving on to her next question, she gave me a long, hard look and asked, “Est-ce que vous êtes connu au Commissariat en tant qu’auteur?” This I understood to mean “Are you known to the police as an author?” I have in fact written three books about France but was astonished that she might have heard of them.

How detailed, I wondered, can the French police database be? I sat up straighter and was just starting to smile modestly prior to making some self-deprecating reply when I received a sharp elbow in the ribs from my wife, who hissed, “She’s not asking about books! She’s asking whether you’re a known criminal.” Ah! I swiftly changed the self-deprecating reply into an unambiguous “non!”

And now we wait!

Having managed to deal with the remaining, less troubling questions successfully, all that’s left to do now is wait. In a mere year’s time, I should be granted French nationality, an event which will be marked by my being presented with a French birth certificate (though containing all my original information). A new birth certificate! At my age! Rejuvenation indeed!

But that’s not all. All recently naturalised locals are invited to a ceremony with Monsieur le Maire where we will sing the French national anthem and drink champagne to mark the occasion. I shall have to make sure I revise the words of La Marseillaise beforehand.

Charles Timoney has lived and worked in France for over 30 years. He lives just outside Paris with his French wife Inès and is the author of Pardon My French, A Certain Je Ne Sais Quoi and An Englishman Abroad

Previous Article Win! A copy of the book, The Madeleine Project!
Next Article We host weddings at our French château