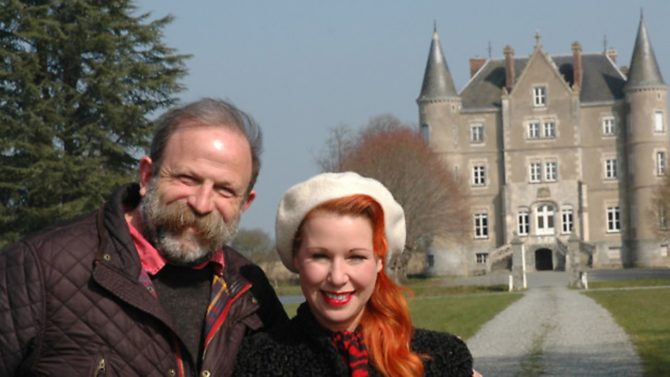 Think a fairy tale castle in the French countryside is out of your reach? You could be surprised, just as Dick Strawbridge and his wife Angel were when they bought a grand château in the Loire Valley

When Dick Strawbridge and his wife Angel Adoree went to France in search of their dream family home, they assumed that their £300,000 budget could afford them a cute country cottage, a renovated farmhouse or maybe even a seaside villa but when they discovered that it could buy them a grand château in the Loire Valley, all of their wildest dreams came true…

At £280,000, the château was a bargain, but there was a lot of work to be done to get it up to scratch. Having been abandoned for 40 years, the property was without electricity, heating or running water and so the couple embarked on a huge restoration project to bring it back to its former glory, all of which was documented on the Channel 4 series, Escape to the Château.

Set in the rural Loire Valley, Dick and Angel set about restoring the Château de la Motte Husson with the intention of using the grand venue to host wedding celebrations, a task that required both Dick’s practical expertise and Angel’s eye for detail.

As Dick tackled the construction side, getting to work on such things as plumbing and implementing a sewage and heating system, Angel got to grips with decorating and giving the property a touch of the couple’s quirky style. So while Dick knocked down walls and dug trenches, Angel rummaged through treasures left behind by former residents in the attic and adorned bedroom walls with gorgeous vintage paper.

It’s hard to imagine a couple more suitable for the job. “We’re a strong team,” Dick says. “The wedding side is Angel’s passion and I love the food side,” says the one-time Celebrity Masterchef finalist.

A major reason why Dick and Angel decided to make the move out to the French countryside was to give their young children an idyllic childhood. “They love it here,” says Dick, before adding, “But it is a worry that they will think everyone has a castle”.

If they’re not hosting an elegant vintage wedding reception in the château, that boasts 45 rooms spread over five floors, the couple like to spend nights in their castle enjoying the simple things in French country life, which involves a lot of cooking for food fan Dick. “I particularly love that shops shut for lunch and there’s more time for family which is very special,” Dick says of his new life in France.

Despite all the hard graft involved in restoring the challenge, Dick and Angel have no regrets. “Life is for living,” Dick says. “We plan to enjoy, bring the château back to its former glory and live life with a smile.” Clearly, this isn’t the end of the fairy tale. It’s only just beginning.

7 reasons to buy a French property to renovate

Renovating a property in France on a budget

Questions to ask yourself before buying a renovation property in France

Renovating a Burgundy home while beating the bank

6 useful tips for renovating a house in France