Why we love spending summers at our home in Occitanie 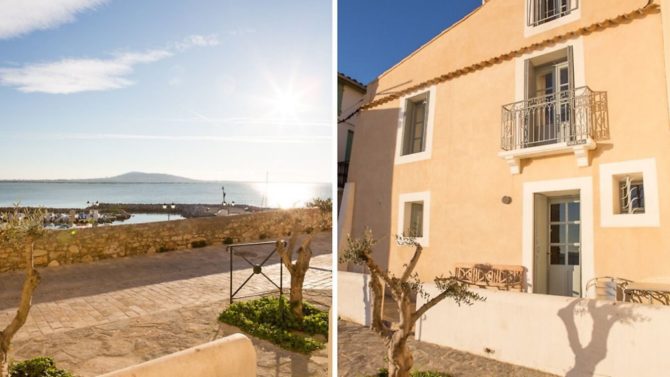 Rip Hopkins and his French partner Pauline de La Boulaye bought a three-storey cottage in the fishing port of Mèze as a family holiday home, which they also rent out to guests

How did you come to own La Maison des Oliviers?

I work in Paris and the house, in the south of France, is next door to my better half’s family estate – they make wine and have had the family seat for generations. The house was a pied à terre for seeing the family. We bought it from my father and mother-in-law two years ago.

Did you have to do much work to it?

There was a lot of work to be done. It’s right opposite the sea and my father-in-law spent years getting planning permission to add another floor, but he never actually got round to building a staircase to get to it.

I did all that work and made it liveable, because it was full of family furniture, you could hardly move around, it was just full of paintings and 18th-century, very uncomfortable, chairs. There was this beautiful house, sitting there opposite the sea, which people only went to once a year.

What changes have you made?

We have totally revamped it and made it practical, exactly like a house we stay in, in Hydra, Greece. Inside it’s a mixture between the Cyclades, the Greek islands and old Languedoc style. We’ve kept the cream of the furniture, which has been in the family for generations.

What do you know about its history?

It was a fisherman’s house and used to be the kitchens for an 11th-century convent next door. Inside the house there is still an arch from the 11th century.

My father-in-law, Antoine de La Boulaye, is a well-known French artist and he loves antiques. All the tiles on the roof come from St-Jean-de-Luz, they are all 18th-century tiles and he found them one by one over a period of 15 years.

Do you get to visit often?

We live in Brussels but we have direct flights from Charleroi to Montpellier, Bézier, Nîmes and Perpignan. They are all between half an hour and an hour’s drive away from the house.

The weather’s sunny all the time so it’s nice in winter, as well as summer and Easter.

What do the family enjoy most about the location?

We have a beach on the right-hand side and the kids can go and play and go to the centre of town and buy baguettes from the boulangerie. You don’t have to worry because everything’s pedestrianised, it’s beautiful, with little cobble streets.

We have a boat too which is right outside the house in a little harbour. We often use the boat to go to Sète. The house is great because you don’t need a car, everything is done by foot or by boat.

How important was it to have a house by the sea?

We also have a house in Vendée, right in the middle of a wood, on the family estate there. We get our dose of countryside and gardening there and the sea in Mèze.

Lots of people who live here say it’s ‘the south of France’s best kept secret’. It’s a bit like St-Tropez in the sense that it’s kept all the charm of a small beach town, without having hordes of tourists.

Where do you like to eat when you are in Mèze?

We generally cook at home because we have a terrace with olive trees, right in front of the sea. We often have 15 people sitting outside for lunch.

Mèze is well-known for oysters and it’s just a 10-minute walk to buy a box of oysters. There is also fresh fish from the covered market which was built by Eiffel and is really beautiful. You can grill them outside on the terrace.

What do you love most about La Maison des Oliviers?

Revealed: France’s most beautiful villages of 2020

Previous Article “For the first time in my life I was relaxed and properly happy”
Next Article Magical murals, e-scooters and goose-quill jelly: 7 things we learned about France in the July issue of FRANCE Magazine