Should I buy a Citroën 2CV? 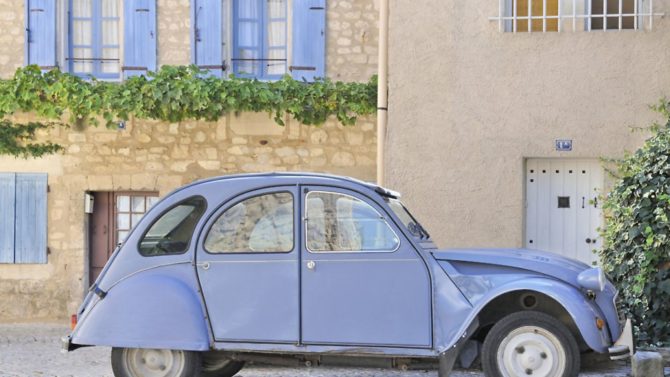 A Citroën 2CV is the dream car for many people but how much does it cost to buy this classic French car and what are they like to drive?

Classic French cars like the Citroën 2CV are cool. They also hold their value (unlike fast-depreciating new vehicles) or even appreciate in price, so they can be a sound investment. And with no fancy electrics and on-board computers to go wrong, they can also be usable everyday runabouts when you live in France.

They say the best time to buy a new computer or other high-tech kit is about a year from now. When it comes to buying a classic car the reverse is true. I bought my first Citroën Dyane for £250 in 1985. I wish I’d kept it. Now, you’d be lucky to find one, however tatty, for less that €3,000.

The Dyane is less sought-after than its sibling, the iconic Citroën 2CV, and for connoisseurs only the real thing will do. Driving one of these quintessentially Gallic cars is like riding a bike – once experienced, never forgotten.

The history of the Citroën 2CV

Ways to save money when driving in France

What is it like to drive a Citroën 2CV?

The ‘tin snail’ makes a virtue of the frills it lacks. The dashboard has just three gauges – speedometer, fuel, and battery. The tiny engine gets around 100km (64 miles) to the gallon, so the 25-litre tank gives you about 500km between top-ups. Not bad, for a car that first rolled off the production line in the late 1940s. There’s no power steering, no power windows, no power sunroof, no heating – no power anything, in fact, so there’s not a lot that can go wrong. With a flat battery, it’s light enough to be easily push started, and older models came complete with a starting handle for just such occasions.

Admittedly, it’s not ideal for longer journeys. The push-pull, dash-mounted gearbox takes some getting used to. For anyone used to modern cars with power-assisted steering, wrestling with the 2CV’s big, unpowered steering wheel feels like driving a truck. Devotees will also mention the unique shake, rattle and roll symphony of engine noise, wind, and flimsy pressed-steel bodywork and the characteristic whiff of hot oil from the air-cooled engine. In winter, wearing a sheepskin coat is advisable – the interior, with its fabric roof, is breezy, to say the least. And good luck with pushing it to speeds much above 90kph. The bright yellow version memorably driven by Roger Moore in For Your Eyes Only (once voted the best-ever James Bond car chase) was fitted with a souped-up flat-four engine to give it a bit more oomph.

But for shorter trips to the nearest market or the beach on a sunny day, with the top rolled back and the summer breeze in your hair, it’s just fine. The 2CV was, after all designed for French rural roads, so it takes them in its stride. If you’re a connoisseur of automotive nostalgia, it’s an ideal vintage runabout to keep at your French home.

Be careful what you buy…

There are still plenty of them around, but caveat emptor is the rule. For such elderly cars, the French contrôle technique is much less stringent than its British equivalent. Don’t even think about buying without a test drive.

“I think we all dream of having the legendary 2CV, preferably in blue, to park outside a pretty French cottage,” says Rosie Whitmore, a British expat who now lives in a tiny village north of Carcassonne. However, Rosie cites her neighbour Tyler’s experience of buying an elderly 2CV as a warning.

“He bought a 2CV from somewhere in the middle of France and then set off with a trailer to bring the car home because, although he paid more than €2,000 for it, it could not be driven. Tyler then spent his holidays in the garage next to us tinkering away on his 2CV for two years to the despair of his wife.”

Once he had finally made it roadworthy, Tyler, a sports-car enthusiast, found driving the 2CV an alarming experience, but he had no problem finding a buyer, selling it at a profit to a young couple who were besotted with their new toy. As for Rosie, after what she describes as “some fairly hair-raising experiences in the second-hand car-buying department”, she settled for buying a three year-old Citroën 3 with service guarantees.

“As it is running out of guarantees I’m now thinking of trading it in,” she says.

How much does it cost to buy a Citroën 2CV?

A generation ago, a pre-owned 2CV – cute, cheap to run, easy to maintain and cheap to buy – was the default first car for thousands of French students and other young people. Some even took them on marathon desert journeys across the Trans-Sahara highway to Timbuktu. There are still plenty of garagistes all over France who specialise in renovating and selling veteran 2CVs, and parts are not hard to source.

But the 2CV is no longer a dirt-cheap option. Tyler’s bargain banger was as cheap as they come and making it roadworthy was costly. These days, a tatty, barely driveable example can be picked up for as little as €3,500, but a fully restored or mint car will set you back more than €10,000. Even the van version used by the French post office in the 1970s is sought after by collectors – a few years ago, auctioneer Bonhams offered a 1974 2CV camionnette in its original La Poste yellow livery with a guide price of €6,000-€9,000.

Like all collectable cars, examples in near-to-original condition command the highest prices. For purists, 1940s and 50s models in the default battleship grey are the holy grail, and true aficionados turn their noses up at the brightly coloured Dolly and Charleston models introduced by Citroën in the 1990s to give the 2CV a sportier look (from 1988 to 1990, when the last 2CV rolled off the production line, they were built in Portugal, which devalues them in the eyes of some fans).

If you’re willing to settle for the next best thing, it’s worth considering the 2CV’s slightly bigger sister, the Dyane, introduced in 1976 as a rather more sophisticated option, but sharing many of the 2CV’s simple virtues. Like the 2CV, it was also offered as a camionnette version (the ‘Acadiane’). Drivable examples of these start at around €3,000, you might find a fixer-upper costs from around €2,000, and for a car or van in reasonable to good nick you need to budget €6,000-€10,000.

The 2CV’s other sibling is strictly for southern summers. The open-bodied Méhari is a mini-Jeep. Unfortunately, it’s a real collector’s item: you’ll be very lucky to find a serviceable Méhari for less than €11,000 and cars in good condition go for around €15,000. When you consider that a nearly new example of its sophisticated remote descendant, the electric E-Méhari, costs roughly the same, that seems a high price to pay – even for one of the dinkiest cars on the road.

What other French classic cars you could invest in?

In the 2CV’s heyday, its biggest rival on French roads was the Renault 4, launched in 1961. Like the 2CV, it was a no-frills vehicle, but with its monocoque construction and without the 2CV’s flimsy canvas roof it feels more like a ‘real’ car. It’s certainly a lot less chilly to drive in bad weather. But the ‘Quatrelle’ (from the 4L designation of the early models) is a good choice if you’re looking for a classic, robust runabout.

Renault sold some eight million all over the world between 1961 and 1994 so the last Renault 4s built are four years younger than the youngest 2CVs. While it has its own nostalgic appeal the Quatrelle isn’t as highly valued by collectors as its rival. The van version goes for as little as €3,000 (though you might have to go to Spain or Portugal to pick one up) and a saloon in good condition might cost as little as €6,000.

The Renault 4’s successor is in many ways an even better buy. The Renault 5, built between 1972 and 1996 has close to cult status thanks to the success of its Alpine and GT Turbo versions as rally cars. For ageing boy racers like myself, it’s the perfect classic car for use on winding French hill roads. It’s also affordable, with prices starting at around €2,000 for a driveable car – but if you fancy the turbo version, the sky’s the limit.

Both La Poste and EDF had large fleets of Renault 5 cars and vans into the 1980s. When they were written off as obsolete, some enterprising rural garagistes bought them in large numbers at auction to sell on to villagers and farmers at rock-bottom prices.

If you’re not too choosy about battered bodywork and a tatty interior, or if you’re looking for a restoration project, these can still be picked up for as little as €600-€900 in running condition.

All these Citroëns and Renaults have their admirers, but it’s a car from another great French marquee that I yearn to own. Built between 1965 and 1976, the Peugeot 204 cabriolet (it also comes in a hard-top version) offers ragtop motoring at a price that won’t break the bank. It was technically advanced for its time, with front-wheel drive, servo disc brakes, and a reasonably sized 1130cc engine. Prices start at around €4,000, so it’s well within my budget – if I can find one.

Previous Article A Trail of Two Cities: London to Paris by bicycle
Next Article 67 French words and phrases you need to talk about the weather